MOMA Knows Best!.., and honors the films of Michael Sporn. 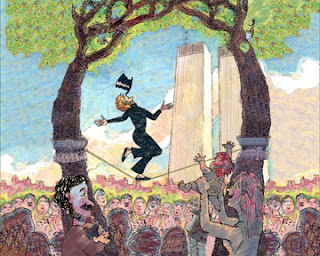 I noticed many things in my first few weeks working for Michael Sporn. First off, everybody, from seasoned veterans to newbies like me, all experienced frequent bouts of work related panic and flop sweat. “Why,” you may ask? The reason was that Michael often challenged his employees by handing out assignments that stretched them well beyond their comfort zone; background painters and designers might be asked to work for a few weeks as animators, animators might be assigned storyboards, the production manager might be asked to figure out a new color technique or to tackle layouts, and a recent studio assistant might be asked to run an entire job as a production manager. Not only did the projects change every couple of months, so did the hats we were all wearing. This was true from the most senior member of the studio all the way down to little ol’ me. Even though this was my first job in animation, I suspected that this was truly a special place to work.

Michael places an amazing amount of trust in his staff. Recently at an ASIFA-East event held in honor of his latest DVD release, I asked Michael how he chooses the scenes he animates himself. He answered that he assigns himself the most boring scenes, the ones where a character might simply have to walk from A to B. Therefore, one can presume that part of Michael’s joy in running a studio must be in how he assigns the work to his staff. Each scene or task is a special bond of trust between Michael and his artists. Although Michael encourages a large degree of self direction from his animators, the resulting films emerge with every frame bearing Mr. Sporn’s fingerprints. I don’t know how he does it!

Still, animation is not all art, and even small independent studios like Michael’s cannot escape the factory side of animation work. When I worked for Michael, the studio was still shooting on film and preparing artwork on cell or paper. There were lots of mechanical handwork involved with paints, glue, and exacto blades. At some point of production, most of the studio would be reassigned to work a few days or weeks at these tasks. At Michael’s, we were so often working to the peak of our abilities that switching over to a more mundane part of production felt like sweet relief! Yet, whatever the relief factor was, we still had piles of artwork to prep or check for camera. Whenever one person ended up with too much work, the rest of us pitched in and redistributed out the scenes. I naively imagined that all animation studios functioned this way. There was never a day with one person working into the middle of the night with everyone else going home.

As a studio boss, Michael has a gentle way of teaching by example. He might fix your drawing and then walk over and explain what he did and why. He’d invite you over to look at dailies and was open to input on the entire process. But, to me, the best part of the day was getting to the studio early and sitting down with Michael and talking “animation” over a cup of tea. Between 9:00 and 10:00 AM the studio slowly came to life, each employee trickling in and taking their seat at the back table. Sometimes we all chatted for a long time, maybe not getting up until close to 11! Such are the pleasures of a family environment. It was truly like an animation home away from home.

Not everyone has had the privilege of working with Michael Sporn, but everyone should come out and celebrate the man’s stunning body of work Nov 9-12 with a special retrospective of his films at MOMA (see www.asifaeast.com for details!). Congrats, Michael!

For your daily dose of Sporn check out www.michaelspornanimation.com/splog
Posted by David B. Levy at 5:14 AM