Reducing the Lazy Factor in an Independent Film 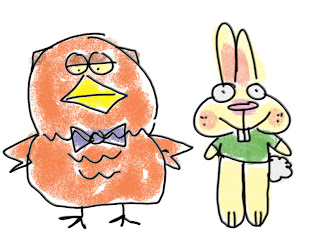 One of the burdens of this age of limited animation is an automatic tendency to split characters into levels, animating only bits and pieces of a character while the rest of the character holds. Don’t get me wrong, I think full animation carries its own curse (where nothing ever stops moving. Think Rock-a-Doodle). Somewhere, there should be a happy medium. Its important to note, in this age of flash-bashing, that held animation levels were invented long before there was flash. Cell animation pioneered this factory friendly technique over eighty years ago. Flash or no flash, animators, particularly those making independent films, have to make a conscious effort to not automatically slick-ify their production values to the point of making a product undistinguishable from the latest show on Cartoon Network or Nickelodeon.

Flash or After Effects lets us make films in our living room sans paper, cells, and especially a clunky expensive Oxberry camera. My latest film, Good Morning, cost me next to nothing to make, while my film from ten years ago, Snow Business, cost 10,000 bucks! However, while these programs allow one to make a film without the prohibitive steps and cost of yesterday, they also tempt us into taking shortcuts that compromise our creative vision. Flash and After Effects encourage animators to “puppet” their characters to limit the amount of new art that needs to be created. Puppeting is just today’s version of limited animation. If Flash puppeting had been available in 1959, it would have been used to animate the limited animation classic Rocky and Bullwinkle.

Still, the shame of Flash or After Effects in the hands of the independent animator is that it lets one so easily sink into limited animation doldrums. While such a production style would be understandable in a TV product where deadlines and budget is tight, it doesn’t make sense for the independent animator to embrace such limitations unless they would best do the project justice. Most of the time, we animators take these shortcuts out of laziness or restlessness to get the end product as soon as possible. Instead, we ought to be making the appropriate choice of animation styling, whatever that might be, so that our projects might reach their full potential.

Anyone who’s worked in Flash or After Effects has to know that the programs themselves should not be blamed. Both programs allow the artist to the replicate hand drawn animation techniques of yesterday, with none of the drawbacks of past production. I’m currently working on a new film, Owl and Rabbit Play Checkers. The original character art (NOT shown here) was created in a flat flash friendly style, using Illustrator, back in 2004. When I made the decision to animate this film in 2008, I opted for a much warmer hand drawn feeling (see above). The new styling was achieved by drawing directly into a wacom tablet in the same technique I used for my film Good Morning. I’m not puppeting my animation. I’m drawing every frame, even though sometimes I may time the drawings on 3s or 4s. The result is very expressive and lets me really get into the acting. This is all the more important because this is a two character film and the success of it all depends on really establishing the differences between these characters.

As for laziness? I suffer from that as much as any animator…but, I’ve figured out a way to make handrawn animation work for me in just as quick a manner as puppeted animation. The secret is not such a secret. This technique allows me to animate with a finished line. There’s no going back to pencil drawings later and cleaning them up to find the polished ink line. I’m not worrying about that. If lines get a little loose or intersect that's okay. This may sound lazy (and maybe it is), but the result is full of life and all the happy accidents that can only come from the human touch. There’s no scanning, because I’m drawing directly into photoshop. The color technique I’m using is also fast and direct, coloring loosely in photoshop with a simulated crayon brush. I don’t need my animation to look like Cartoon Network. When Cartoon Network pays me to make a pilot for them, then, I’ll worry about that problem. For now, I’m making an independent film, and I find half the fun is discovering and slaying whatever obstacles might be in the way so that, in the end, the film wins.
Posted by David B. Levy at 3:43 PM

Amen, brother! I look forward to seeing your final results on the new film.

Wow Dave, I was aware the new technology makes a difference, but the idea that an independent film of yours cost $10,000 is amazing to me. If there's ever a way to see Snow Business, I'd love to hear about it.

I'm working on my own films, similarly using Photoshop and AfterEffects, but still animating on paper and scanning. I've never been satisfied with the tablet for my own drawing (maybe I just need a bigger one?) but I'm very intrigued about using a Cintiq. My only question is: how easy is it to check each drawing against the others in a sequence? Maybe that's a naive question: I suppose being immediately able to play back the animation in the computer is more foolproof than "flipping". Do you have an estimate on how much more time-efficient your process is now than it was for Snow Business? Ofcourse, part of that efficiency is probably not only reducing the time spent drawing and painting the animation but also having a more immediate sense of its "place" in the context of the finished film...

I'm not really flipping my drawings for Owl and Rabbit. Instead I'm sort of onion skinning the layers of drawings in photoshop to gauge the animation as I draw. All the timing is done in after effects once I finish a scene. Its extra exciting winging the lip synch and then making it work afterwards.. This is lots of fun for me and puts spontaniety into the process. I think that life will come across on the screen...

The process I'm using now is more direct. There's no distance between my drawings and the film. No step to ready the drawings for the screen. I draw them once and they are done. No scanning, no clean up, no fussing. I won't use this method for everything I do, but, its fun further exploring the technique I used for Good Morning, and applying it to a narrative with color and all the fixings...

Well, I'll be excited to see the film. I'm glad to hear you say "There's really no distance between my drawings and the film". I'd been interested in the idea of having as direct a process as possible and thought "drawing in the computer" might be the best way to do that (no real change in the original mark and what you see in the film!) I've been very frustrated at times with the process I use: I can get a pencil drawing I really like and hopefully it stays good to the end but too often the digital ink and paint felt like it was burning off some of the "quality", not building it up. There's also so much more labor involved in inking, scanning and painting at a high enough level that it will live up to the promise of a good pencil drawing. Certainly good films are made this way by people with time and budgets, but when you are trying to do as much of the work yourself as possible it can't be the only way to go about it. It's always been my experience that the best drawing is the freshest drawing and that more "layers of process", unless they're really integral and are given as much love as that first sketch, aren't going to add to the filmmaker's goal. I look at my friend Stephen Neary's films as being in that kind of "direct" approach: he has such a handle on the way he uses AfterEffects that his characters and animation are really designed to exist just as they do; it's all very natural to him. I'm also interested in the way it sounds like you're working out the timing: sort of making the drawings you need and letting them run at whatever "frame rate" is most appropriate. I would imagine this would be a very freeing approach and, when done right, could really make for a good film. One thing I always noticed about "Good Morning" is how much you made each "keyframe" count, sounds like that will also be true for "Owl and Rabbit Play Checkers". I suppose what I take away most from this conversation is the need to fully understand and control your process, to have no part of it go unused.

I'm glad you chose to go in this 'hand-drawn' direction, it really does lend a nice warmth... definitely looking forward to seeing the finished piece!

These desings are pretty cool.

It's very easy these days to let the technology drive the film, rather than the other way around. My last short I got very caught up in building these hugely elaborate after effects puppets with expression controls, face rigs, ik, you name it. They were great for churning out fast animation, but whenever I needed to get the character into a mildly interesting pose, they broke or they looked terrible. I don't think the finished film is horrible necessarily, but it's all technology-driven.

So I went back to basics with the film I'm working on. I let the shot and the story dictate how to approach the character in every scene, instead of letting a rig determine the pose. Not a difficult concept to grasp, I know. It's still after effects, butwithout all the needless bells and whistles of a full-blown tv show.

economy is an interesting debate. And not just economy of animation--economy of story is a fascinating argument as well. One of these days I'll do a big post on my thoughs.

Are you writing about your film, Sharksuit? I loved that short... very clean layouts and daring ambitious stuff. Funny too!

Hello. This post is likeable, and your blog is very interesting, congratulations :-). I will add in my blogroll =). If possible gives a last there on my blog, it is about the Fragmentadora de Papel, I hope you enjoy. The address is http://fragmentadora-de-papel.blogspot.com. A hug.

This is some good theory, especially on the subject of limited animation, and the potential of doing this easily nowadays with Flash and After Effects (probably 2 applications I need to seriously consider if to become an independent film-maker.)
I wish you all the best of luck with your project.

Just finished my thesis and hope to be starting another one soon. the first apres nyu film...