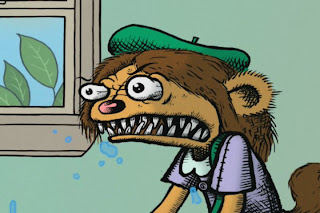 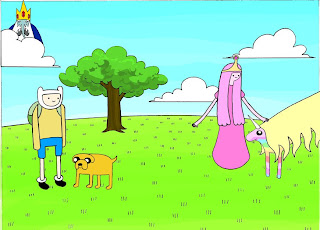 It’s the day after the big ASIFA-East festival and my thoughts are filled with all the good films and good times from last night. A super big congrats to all the winners and a huge "thank you" to the many folks that tirelessly donated their time to pull this off. In particular, I’d like to give a shout to our jury film list guru Candy Kugel, festival co-chairs: Nancy Lennert and Linda Simensky, Celia Bullwinkle for making the opening film, Cliff Galbraith and Justin Simonich and Dayna Gonzalez and Mark Bailey and Adrian Urquidez for spreading the word about the festival, Cartoon Network and Michael Grover for sponsoring the party, Linda Beck and Jennifer Oxley for planning the party, and our welcoming host; Parsons School of Design and Anezka Sebek. Check in with our website, www.asifaeast.com, this week to see the full list of winners.

Our apologies for not having time to screen the two honorable mentions in the student category, which were; Michael Langan’s “Doxology,” and Joy & Noelle Vaccese’s “The Scritch-Scratch of Busy Little Hands.”

There’s a lot of film’s I’d like to discuss in subsequent postings, but I’m eager to first offer some comments on Fran and Will Krause’s Cartoon Network short, “The Upstate Four,” and Pen Ward’s Frederator/Nickelodeon short, “Adventure Time.” It was a treat to see these films play nearly back-to-back in the festival because they represent the hope that still remains in sponsored TV product.

Fran and Will’s short was a virtual follow up in theme and tone to their previous Cartoon Network short, “Utica Cartoon” (2002). Both their shorts open with characters engaged in game play, have plots that center on obsessive eating, and feature bizarre casts of human, animal, and surreal characters. The six years have been good to the Krause brothers and they have emerged with an even stronger point of view than before. Part of their growth was letting go some control and it was to their benefit to bring in strong support in voice talent and sound design. “The Upstate Four” races along at a break neck pace, with main character Mary not even having time to properly mount and ride her bicycle to the big finish. The film frequently goes places other TV cartoons would not even think to tread. I couldn’t tell you the last time I saw a character with a tombstone for a head play checkers or a furry snack scout that, when angry, transforms into a cross hatched pen & ink R. Crumb-like design.

Pen Ward’s “Adventure Time,” might seem like a celebratory parody of adventure story clichés, but it is so much more and so much less at the same time (and I mean both in a good way). The real theme of the film is innocence. One usually thinks of Mr. Warburton’s Code Name: Kids Next Door as being the best example of writing for a kid audience. Still, KND (by its own cleverness) seems very much organized with an adult’s logic. In contrast, Pen Ward is truly floating in outer space. “Adventure Time,” only sprinkles on just enough plot to set their characters into action and relishes in spending all of its energy on character. Design wise, never have I seen such an uncluttered TV pilot, and the characters are so basic and simply drawn that they might be mistaken for preschool if they weren’t so distinctly odd. “Adventure Time,” is unconventional in just about every way.

Taken together, “The Upstate Four” and “Adventure Time” show that there are great things to be done in sponsored film and I give both Cartoon Network and Frederator/Nickelodeon three cheers for recognizing the merits of these filmmakers and letting them lose to make some wonderful cartoons.
Posted by David B. Levy at 7:36 AM

The Krause Brothers' R.Crumb/Wolverton reference (which one is it guys?) was one of my favorite moments on the screen last night! Not to mention Will Krause's fantastic, unique backgrounds in the same short. It's fun to see the snack scout freak-out posted here.

Adventure Time makes me cry. I'm not kidding. I love it that much.

Those two shorts were only two of the several hi-lights of the evening. I think you said it best when you said that it was great that commercial shows can show such innovation and daring.

I especially enjoyed the party afterwards, and meeting so many great people. (This was my first ASIFA fest).

Yet another even I regretfully missed (due to 3 papers I had to write -- yours was already completed ;)).

I would have been a real treat to see "Adventure Time" playing on the big screen. I had seen the short play all around Youtube and on Frederator. The simplicity makes for some characters that seem really easy to move! As for The Krause Brothers' short -- I'm REALLY upset that I didn't make it to see it. I loved Utica Cartoon and I'm sure the latest short was incredible. . .it was actually one of my favorite pilots during high school (when they had the kids vote on cartoon network). The worst part is that I intern at Augenblick and they work there -- I won't have anything to say. :(

As God as my witness, I'm going to these events and getting my membership ASAP! School's over! No excuses! Ha ha.

I guess one good thing to come from it was that I talked to friends about the festival and was able to do my own research on some of the filmmakers. ;) I suppose it would have been better to actually get to meet them in person and see the films amongst fellow animators.

Also, just wanted to make sure all of you know that the winning filmmakers are listed now at:
www.asifaeast.com