Emmy Which Way You Can 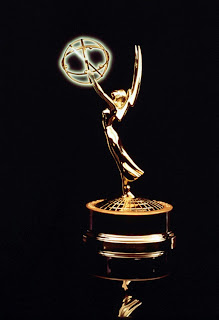 I just had the neat experience of serving on the panel to award Emmys for the individual achievement in animation category for the daytime Emmy. It was a treat to reconnect with fellow panelists such as Dave Palmer, Jason Oliveri, Kari Kim, Tina Moglia, Masako Kanamaya, Lisa Goldman, Stephen Neary, Bob Charde, JoEllyn Marlow, and Biljana Lubovic. It was also an opportunity to make a few new acquaintances; I took an instant liking to Dominie Mahl and Alan Foreman. How lucky are we that there are so many great people in this business? The answer: very, very lucky.

I sat on the sub committee that had to decide on an Emmy for production design. Our group poured over twelve or so entries to search for something that met the prize’s criteria. Production design is how well all the elements weave together. Do the characters pop properly off the backgrounds, while at the same time belonging to the same world? Does each shot read clearly? These are but a couple of the questions we had to ask in order to evaluate the entries. Although some of the productions managed to have successful enough production design, our job was to determine whether or not that meant it was “Emmy worthy.” We felt a responsibility to ensure that the Emmy would mean something.

Such a responsibility makes one think anew about the productions they’ve worked on in the past. In TV animation, each episode gets precious little time on the assembly line and many creative fires are put out along the way. I suppose that an Emmy worthy production wouldn’t show any of those battle scars in the final production. An Emmy for individual achievement in daytime TV animation likely means that this person (and production) went above and beyond the limitations in time and budget to make a truly stellar product. As I tackle my next duties in TV animation, I’ll be reminded of this.

Each committee found that they could tell when the artist was truly inspired by the project or whether they just saw the job as a paycheck. We all noted how stellar preproduction work (including inspirational art, storyboards, layouts, and background keys) had to be at the start due to the inevitable fact that these elements get watered down on the way to the finish line. Perhaps the hardest category to award was the individual achievement for animation. Unfortunately, TV animation is not an animator’s medium. The best productions on TV succeed on the basis of clever writing and sharp design.

The experience serving on this committee reminded me that our work must always stand on its own if its going to considered for excellence. Richard Gorey told my SVA career class, “You are not rewarded for hard work. You are rewarded for outstanding work.” That sounds like the criteria for “Emmy worthy,” to me.
Posted by David B. Levy at 9:52 AM

What about the Dustys?

freelance obligations defeated my ability to make it to the dustys...but, Rich Gorey and I will borrow the Dusty's reel and watch it. Certainly I will post on it on a future animondays.
Congrats to all the SVA students featured in this year's dustys... if any of you would like to send me a link to your film, I'd be thrilled to check it out!