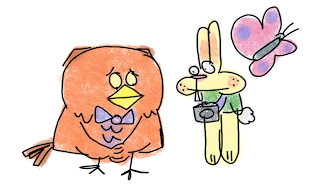 In his latest blog post, Ward Jenkins describes what motivates him forward to create a personal animated film. You can check it out at wardomatic.blogspot.com. He shares what are perhaps the most universal reasons why most independent filmmakers are drawn to make personal films. Ward writes, “I just want to work on something that I can call my own. To create characters in my style, and animate them however I want. To be able to work on something where I don't have to answer to anyone. I'm calling the shots here. No art directors, no producers, no creative directors to answer to! Freedom. Liberation. Joy. And once it's done, there'll be such a feeling of accomplishment you can't even imagine. I look forward to that moment -- it's what will drive me throughout the entire process of making this film.”

At an ASIFA-East event screening Paul Fierlinger’s PBS animated documentary Still Life With Animated Dogs, somebody asked the filmmaker to name his inspiration. “Fear,” he replied. “Fear of not earning a living.” I think Paul’s answer surprised many in the audience. I wasn’t surprised because “fear” has been my constant motivator since SVA.

All of us have natural fear in our lives and careers. I know where my fear comes from. My skills as a filmmaker and animator have never been where I wanted them to be. My original fear was that I would not have the skills or talent to break into this business. Once I did just that, my next concern was a fear of keeping my place in this business.

For me, fear is empowering. It helps me focus my goals and stay motivated. Fear inspired my first independent film, Snow Business. At the time, I was recently away from working at Michael Sporn’s studio, where I learned a whole host of traditional animation production disciplines. I was worried that all of my new found skills would wither and die, so I desperately kept them alive in the form of a personal film. This film allowed me to continue to work through my lessons from the Sporn studio over the next two years. It was a fear of loss channeled into something positive.

I suppose I should point out that fear alone is not enough to act as a catalyst to action. One has to have ambition. One also has to have a driving need to develop their own voice as a filmmaker, since there’s no other way to do that besides making films. I have these additional motivations, but “fear,” is certainly the galvanizing factor.

Ten years after the completion of my first film, fear is still helping to guide my career. Case in point– something petty and small just happened on my latest gig that served as a reminder that this job was not my baby. Although my latest job is a career break-through, it’s still a commercial job for hire. I had a fear I was getting too close to this job. I feared this would make me lose objectivity and prevent the client from getting the best I had to offer. This fear pumped new enthusiasm into my current independent film. As a form of therapy, I dropped everything, and devoted the next three days to push a new scene to completion on my film.

We are very fortunate that we have the ability to balance the commercial and artistic sides of our lives. A healthy dose of fear has been my friend for over a decade. What’s your motivation? Comments welcome below.
Posted by David B. Levy at 6:14 AM

one of the thousands of lines i've stolen from mo willems includes the one about what motivates him to create.

he also has a great joke about urine, but he can keep that one.

For me, it's curiosity. When I'm making a film, or planning one, I usually find a few limitations I want to place on the film: the type of camera angles, the design of the characters, the color choices, what information I withhold to build tension, the frame rate... on and on. I see filmmaking as a series of decisions that build on each other to create a unique finished work. Deciding where those choices need to be made and working within their limitations is the fun part for me.

Just another note: fear, for me, works in the opposite direction (away from independent work). Fear is what motivates me every now and then to look for a job.

My mother would probably like me to be more fearful at times.

I think that apathy has a bigger infuence on most careers than does a healthy application of fear. Fear usually keeps people from achievement. But, it doesn't have to.

I like to tell stories. Run with an idea, see how far I can develop it, think about how characters interact. Sometimes there's just a particular image I can't get out of my head.

But mostly, I make stuff that I would want to watch. getting other people to watch is the hard part.

I like something English composer Gustav Holst said, which was something along the lines of:
When you have the urge to create something, wait. Then when it resurfaces, wait some more. Then wait some more until the idea of not creating the work is unbearable, and you cannot go on otherwise.

As an amateur animator, fear of not finding a job does not motivate me at all to create (after all, there is always McDonalds). Rather, fear of Death motivates me for most of my artistic projects, and fearing that without work that I am proud of creating, my life has little meaning.