PES and the "Trick Film" 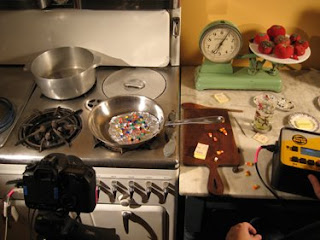 It’s almost embarrassing. How is it that PES, a self-taught filmmaker dabbling in stop motion can teach most traditional animators a thing or two about a thing or two?

Animation history explains the first fantasy films were produced in France by Georges Méliès (1861-1938), and as his special effects techniques improved, Méliès began producing longer fantasy films, and filling his movies with more and more trick film effects. Méliès is a stepping-stone, leading to other things including the art form of special effects and the development of an animation industry. The trick film became a dated novelty, long ago replaced by more sophisticated filmmaking. The only problem is, somebody forgot to tell this to PES.

PES’s latest short, “Western Spaghetti” is featured at the 5th Animation Show, now playing at the IFC center in NYC. As I’m hosting a Q&A with PES following Tuesday night’s 8:20 PM show, the filmmaker has been on my mind. In 2008 we are a hundred years on from the days of Méliès, and it makes it easy to assume that nothing can surprise an audience anymore. Since liquid metal morphed into the terminator and dinosaurs came back to life in Jurassic Park, the novelty of CGI REALITY has worn off. Audiences are now used to seeing anything and everything.

“Western Spaghetti” opens with a close up of a stovetop gas burner. The shot is well composed and beautifully lit. And then a hand enters into the frame turning on the burner, which lights in animated candy corn flames set to a natural gas sound effect. At once its possible to imagine what an audience might have felt watching a Méliès film upon initial release. Forgive an overused phrase, but PES is a master at making the ordinary extraordinary. The premise is simple: the filmmaker cooks spaghetti, substituting familiar ingredients with abstract artifacts of pop culture. Googily eyes become salt, tin foil texture represents oil in a pan, undulating bubble wrap is boiling water, pin cushions are tomatoes, a ball of yarn is a hunk of parmesan cheese, a pack of yellow post it notes is butter, a dollar bill is basil, and etc.

It’s not so much the gimmick of substitution that makes “Western Spaghetti” crackle to life; it's the filmmaker’s slavish devotion to his subject. He stages and lights each composition with the same mastery DP’s used to shoot a close up of a starlet in the golden age of Hollywood. Anyone can create action by shooting an object in a series of frame-by-frame movements, but PES weaves his elements together, putting a new spin on the familiar in a way that we haven’t seen since Warhol worked in soup cans. PES can take a few items from his junk drawer and make a film with a stronger point of view than the average animator toting around Richard Williams’ Animator’s Survival Kit. How can we not be impressed?
Posted by David B. Levy at 3:25 PM

All true. PES is a truly unique artist.

I enjoyed the Q and A last night. It was interesting to hear his thoughts on his work and the animation process.

I have attended several ASIFA events and have been meaning to introduce myself, maybe next time. Anyhow, I animate and teach animation in the NY area. I recently read your book and appreciated hearing about the industry from an insider.

Just wanted to say that I found your book at Barnes & Noble this weekend, bought it and it's fantastic! I'm almost done with it and will, I'm sure start over at the beginning when I'm finished. So many books on career guidance have nothing useful to offer, but yours is really a trove of excellent advice. Thanks so much!

wow, guys.. two nice book reviews in a row!
I really appreciate it and I'm delighted that the book is helpful. I couldn't have written it without the help of a lot of stellar people.

Hope to meet you both soon!

David - I curate a kids film festival here in NYC and wanted to reach you regarding your film "Good Morning." Please email me at: