The Ins and Outs of Indie Animated Features 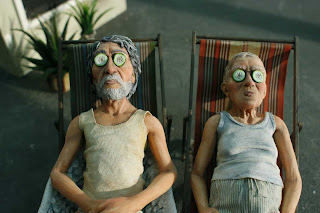 ASIFA-East held a panel on the state of NY independent animated features on September 23, 2008 that was moderated by cartoonbrew’s Amid Amidi and featured panelists Emily Hubley, Dan Kanemoto, Bill Plympton, Michael Sporn, and Tatia Rosenthal. Each panelist has either finished a feature or is in progress on one. The audience was first treated to a two-minute clip of each film before the discussion began. One aspect of making an independent feature dominated the conversation: how to secure funding and distribution. The next day Michael Sporn lamented on his splog how he had wished there had been more questions on the creative side. Nobody asked how a filmmaker used to working in shorts deals with the creative problem of expanding their vision to a feature length medium.

The same lack of creative curiosity goes on at panels on pitching and development for an animated series, where the dominant conversation is always about how to pitch or legally protect ones ideas. My feeling is that in both cases the audience and panelists each believe they already possess the creative chops to make a feature or create an animated series. Of course, they are probably mistaken, as these goals are only realistic for a very small portion of those attending such events.

Forget funding. Forget distribution. At least for a minute. The real issue for me is, “Will there be an audience for my indie feature film?” Persepolis was picked up by Sony Picture Classics, which ensured it a world wide, albeit somewhat limited release. The film didn’t make it to every-town USA but, it did play in artsy theatres in major US cities. That’s probably the best an indie animated film can expect to achieve for now. Tatia Rosenthal’s $9.99 seems well heeled to follow in Persepolis’s footsteps because of its lavish-for-an-indie-animated feature budget of 3 million bucks and a world-wide distribution plan built into that (see image from $9.99 above). To secure such an arrangement, Tatia began with a killer script, a grant from NYU, a place at the Sundance workshop, a willingness to upset her life and move to Australia for the two-year production, and perhaps most important––a willingness to relinquish ownership of the film.

The larger budget and broader partnerships not only showed in Tatia’s film clip, but they also ensure a much more certain future for her film. Her sacrifices (which also include an 8 year production time!) will not only get her film seen but will also nicely set up her career to direct another feature, which she might own and even get to make in the city of her choice.

Sitting somewhere in the audience that night was an indie live action feature producer friend of mine with 18 years experience in the business. She gave me fresh perspective on the event when she explained that while each of the filmmaker’s had a compelling back story about their film, ultimately the audience is not going to care about that. The audience doesn’t see a film because the filmmaker struggled over many years to make it. The film has to be compelling in its own right. Compelling in its subject and in its execution.

We indie animators are used to playing in the safe and small pond world of short animated films. We know how much they cost, how many ideas they can hold, what level of risks we can take with them, and where to get them seen and distributed.

Some ten years ago I attended a script reading of Tatia’s film by professional actors in New York City. Sitting on stools with scripts in hand, they read through the entire feature length screenplay in real time. We, as an audience, were transfixed. I felt as if I’d seen the film that night, it so came alive in my mind.

On the panel Michael Sporn correctly pointed out that Bill Plympton is a pre-sold brand, but (I would point out) this has not proved enough for Bill Plympton to achieve the success in features that he desires. Sporn wisely adapted Edgar Allen Poe's biography along with a few of the author's short stories to frame his feature. Poe IS a pre-sold commodity even if Sporn’s name (outside of animation circles) is not. Dan Kanemoto chose the rich tapestry of WW II stories as his theme, but after being unable to secure the rights to authentic soldier’s stories, made up his own. However, WW II is an evergreen subject and one which upon limitless stories can be told. Emily Hubley seems to have made the most abstract feature on the panel, which explored the familiar themes of her shorter films. Yet, as a master of securing film grants and private funding, she may have the least financial risk on the line of this panel.

The two main business models presented this night were making it/showing it/and it will find distribution VERSUS making it with the financial and distribution partners already committed. Obviously the filmmaker doesn’t always have a choice in the matter. Sometimes one just follows their muse and throws caution to the wind. How lucky for us that so many interesting films are going to see the light of day, even if that light may only show at animation festivals or on the filmmaker’s self-distributed DVDs.
Posted by David B. Levy at 4:43 PM

Dave, as usual, you're right on the money (ahem). As a producer, it's somewhat disheartening to rarely engage with filmmakers who are less interested in discussing filmmaking than dealmaking. "How do you make money in ____ [kids TV, movies, internet, fill in the blank]. (For whatever it's worth, it's only in NY that the issue of "protection" comes up regularly.) We all want to make money, but we won't unless we know what films we're interested in.

Of course, media executives have their own version of this problem. The obsessive interest in "hits" unattached to creative vision dooms their process too.

With both sides limiting themselves to a narrow discussion of the issues, is it any wonder so much of the result is so, so... forgettable?

I had a question I wanted to ask, which I never got to. I wanted to know what the opinions would be of an animation director moving back and forth between independent and commercial features, much along the lines of guys like David Lynch and Steven Soderbergh. Both worlds seem to have their own pros and cons.

I kind of wish there were more questions about the creative process of making a feature. I mean, the feature needs to be be interesting enough to secure funding. I think several of the audience members, including myself, were thinking that a commercial story could be produced just as successfully in an animated feature. I think its possible, and can be done without all the cliches that ruin commercial features. But there should have been more questions about the creative aspect.

Well said, Fred. And, in particular, a first time feature director or series creator needs to put the priority on getting their films made. Most careers are built one logical step at a time and this path is no different. I think your work with Dan Meth is a good example of a producer and a filmmaker finding a way to work together to make something.

Emmett,
Good thoughts... although I'm not totally sure what you are asking me in regards to an animation director moving between indie and commercial features. That sure would sound great to me (or to just about anyone)... but, that's a little like asking, should I be a millionare or a billionare. Either is fine, but not easily achieved. But, neither are impossible either. Set your course and make the right choices along your career to get you there. It could happen!

the way mike and I are sorta approaching things right now is we just pick a project that interests us, that seems within range of our capacity to get a thing done, and then simply stick with it till we really like what we have. all we need is time, not money, since we're doing all the art work. still, money would buy TIME and HELP which are both very important for taking on bigger projects and new creative challenges.

one of the best pieces of advice i ever got came from fran krause: he said "no one will pay you to do what you haven't already done".

Yes, it's difficult to raise money. Yes, it's difficult to sell and market your film. You advise readers to "forget funding and forget distribution. At least for a minute. The real issue for me is, 'Will there be an audience for my indie feature film?'” But that's talking about money again.

My point in my piece was that those in the audience were STUDENTS asking only about money and distribution and marketing. They have access to all the equipment they want for the price of their education; that is the ONLY time they won't have to worry about money. They have to be creative and worry about making a film that is as artistic as possible.

At this point they should only be asking about creative ends, instead they're most interested in making a buck. No wonder so many bad films are out there.

I was looking forward to my first ASIFA event.
The irony is that my work papers arrived and I started my first NYC animation job.
I was busily working away on 25th, merely minutes away...

Michael,
For me, the question: Will there be an audience for my film?, is a creative question. I know it sounds like marketing and such...but, I'm talking about- is my film creatively compelling? Does it relate to the world? Does it say something? That's a creative side of the coin to me. Persepolis does not feature a subject one would call commerical in the US, but it did succeed because there was an audience for it because it met the creative requirements above. I'm not certain I'm making my point as well as I could.

I'm not so certain that the students asking the money questions has all the negative implications you suggest. Students could use a dose of reality. They spend their whole four years with their heads in the clouds. Its good for them to spend one evening thinking about the real world of money and distribution. Knowledge is power.