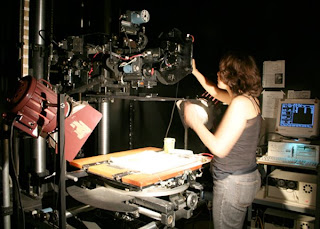 On a floor at NYU’s Tisch School of the Arts sits an Oxberry Camera. The camera is now out of use and serves as a marker of a change in the animation industry. A card explains the camera’s function to passers by, boasting that Mo Willems, Jennifer Oxley, and Michael Dougherty (among others) shot films on this Oxberry.

Back in the day, shooting animation was one of the most expensive parts of the traditional animation process. Artwork would have to be carefully organized and all timing and camera needs had to be clearly marked on exposure sheets for camera men who would toil away into the night. Most animation studios did not own their own Oxberry cameras. The machines were heavy, expensive, and required towering ceilings wherever they might be installed. Still, these devices were essential to the animation process for almost a century. Yet, at the end of their run, schools couldn’t give them away.

We all know that the computer age changed the systems by which traditional animation is produced. Now, making an animated film is cheaper and easier than ever before. Working on a Mac or a PC in Flash or After Effects, one animates and exposes and shoots animation all at the same time. The "camera" (in a virtual sense) is now a part of the animation process and is in the animator’s hands.

The questions are “What was gained?” and “What was lost?” The gain is that one person can create a full-service animation studio with a computer tucked in their living room. I just upgraded to the most powerful Mac pro tower and Wacom Cintiq with enough power and hard drive space to make an entire animated feature in HD. At the very least, it will allow me to fly through freelance work and my short personal films.

The loss has been the decline/shift in the old disciplines of animation craft. Animators used to have work in a more organized and careful manner, diligently prefiguring out camera moves and instructions on exposure sheets. A single mistake could blow a whole shoot, resulting in major losses in time and money. Now, animators work in more freewheelin’ manner, perhaps with nothing more than a rough idea of how a scene may work before animating it and compositing it together in After Effects. Working in this manner, the animator can retime animation, camera moves, and etc in an infinite amount of ways––each just a mouse click and a ram preview away.

At best, this loss is also a gain. My new personal film seeks to make this working method into strength. By using such a freewheelin’ approach to production, I’m hoping this spontaneity will help give my animation added life and interest. By drawing directly onto my Wacom, the roughnesses of my drawings are preserved as they are. I don’t time out the animation in advance. I only draw the drawings I think I’ll need and then allow new accidents and discoveries to happen when timing them out in After Effects. I seldom need to go back to Photoshop to add new drawings. Once I’m happy with the scene’s timing, I return to Photoshop to color the drawings in an imitation crayon style. Again, the looseness and human touch comes into play in the production process.

For me, this age of animation production means neither gains nor loss––it means so much more than that. It means freedom.
Posted by David B. Levy at 7:55 AM

Working on cels was a nightmare.

The technique was great at giving artists obstacles -which sometimes resulted in great innovations to make it a less burdensome process. John Hubley's film are a crowning example of this.

But most of us aren't in the same stadium as Hubley, so the Oxberry process was little more than hard times.

I was visiting Greg Ford Studios last week and they showed me the old Oxberry they still shoot with... it was a childhood fantasy fulfilled!

When I got back into animation a few years ago, I knew that Oxberry's were how animation was shot so I figured I had to buy one and worked on that until my brother managed to convince me it was the wrong idea and to just buy a few computer programs. Greg said a lot of Oxberry's can be bought very cheaply but will cost the purchaser upwards of $5,000 just to move.

I agree that having the freedom computers give you is fantastic but sometimes I wish I was forced to plan my shots better. Instead, I often find myself animating a thing, realizing I could have planned the layout better, and having to use AfterEffects to "make it work". Kinda wish I had the old school discipline AND today's freedom...

I cut my student film on a Steenbeck and enjoyed it a great deal....

Animation that's done on film has a totally different quality than what's done on computers. I agree that computers have helped out a great deal in getting animation done faster.
But the idea that there aren't as many challenges or obstacles is something that has swirled in the back of my head. I wonder if quality is now sacrificed for time and money (although I'm sure that's been the case with many projects). I always liked the idea of computers offering assistance in gaining the results we artistically desire.

It's a shame to see these fine pieces of film making craft go away.

There are some sorts of animation that are better done directly under the camera instead of "simulated" by digital means (clay on glass , oil paint on glass , sand , beads, found objects) and I hope that those types of alternative animation will not disappear now that students and animation departments don't have cameras and camera stands to "play" with .

Don't mistake what I'm saying: I love my digital programs and my Cintiq and I'll be happy if I never have to paint another cel , but I'd hate to see those spontaneous , playful direct-under-the-camera types of animation disappear.

ROC,
I'm with you when it comes to cels. They were the production solution of the time, but a huge hassle in just about every way.

Tim,
You are right about the "make it work" in AfterEffects problem. That's an easy pattern to fall into. But, sometimes it leads to discoveries too. Its not all bad.

Elliot,
I'm glad I got to use steenbeck's and moviolas in school too... but, I'm also glad I never have to touch them again. : D

Emmett,
I think that quality has fallen in animation because of the relative ease of production these days. The old ways acted as a filter keeping out would-be animators who didn't have the passion or money to follow thru on a project. But, for those with the passion today are enjoying all that the computer has to offer.

David,
With frame capturing devices such as lunch box or frame thief people can still do "under the camera" type work today.

Cels WERE a nightmare... but there was a zen to the process that I kinda miss.

Not enough to go back to it, mind you.

Still... I remember having contests with Candy Kugel at Buzzco where we tried to guess the exact number of dried cell paint. She was always DEAD on and able to tell the difference between Cartoon Color rose red 3 and 4. Me? i was always 3 numbers off.

Actually, now that I think about it- I don't miss it at ALL...

I had to doublecheck and make sure that wasn't me in the picture!!! I knew that Oxberry in and out, and then as soon as I graduated, everything went digital. But I appreciate the traditional ways and I'm very glad I learned in the age of film, Oxberrys, Moviolas and Steinbecks. I agree with the feeling of zen, and there was something about the patience it took to get everything painstakingly right...

I wax nostalgic, but yeah, times have moved on and so have I. I still apply all I've learned to my work today.

David - your email inbox appears to be full (so I guess this won't arrive either...).
It's rejecting my emails (although that could just be a personal thing).

I cleared out my inbox.. try again.

While I will never desire working on traditional cel in all its laborious glory, I'll second your thought on the loss of dicipline. An easier process can make for fast, sloppy work, and many younger artists don't hone their draftsmanship. But I do enjoy the gain that lonely me at home can make higher quality work in this fast-paced industry!