Not So Merrie About the Merrie Melodies 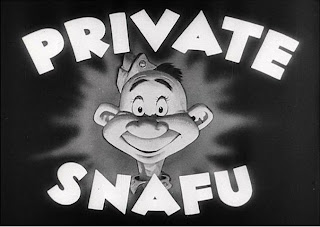 The sixth Loony Tunes 4-DVD set just dropped into stores, and according to a post by Jerry Beck on cartoonbrew.com from a way’s back, it might just be the last. This is as good a time as any to discuss the series’ strengths and weaknesses.


Commentary Tracks:
Pro:
A handful of commentary tracks on each disc (ranging from the very informative Greg Ford and Mark Kausler to genially enthusiastic Jerry Beck and Eric Goldberg to historical musings of Michael Barrier and Daniel Goldmark). For the most part, any commentary is a welcome addition to these sets.

Con:
-Disappointing commentary tracks from voice artists such as June Foray and Stan Freberg due to their lack of fly-on-the-wall insight. After all, they were THERE.
-Hot and cold John K commentaries. He had virtually nothing to say on the brilliant Chuck Jones’ short Waikiki Rabbit, made all the more noticeable by Eddie Fitzgerald’s constant laughter.


Cartoon remastering and restoration:
Pro:
Restored original titles, uncut cartoons, and remastered picture and sound bring these cartoons back to life after decades of mistreatment.


Cartoon selection and distribution:
Con:
-HUGE CON! Why weren’t these shorts presented in chronological order? I wouldn’t even care if they’d skipped Bosco, Foxy, and the other earliest shorts. They could have started with Porky Pig and moved on from there to the very end of Warner’s shorts. Then, there could have been archival releases of what came before. The recent official Fleischer Popeye DVD sets show how chronological collections make the most sense. This way the viewer gets to see the filmmakers and the cartoon stars evolve over time and change as products of their changing times. In the random way these cartoons are spread over these six sets, this is completely impossible to track.


Other special features:
Pro & Con:
-Any special features are automatically welcome, but, bonus cartoons (such as early black and white Harman and Ising era WB cartoons) just make me sad because it leads me to conclude that such cartoons will never be released in a chronological and archival DVD set of their own. Instead of bonus cartoons, these seem like cast offs.


Cover art:
Con:
Again, look to the Popeye collections to see how such covers can be rendered with respect and dignity. The cover art/art direction of these six sets is an absolute abomination to the point where they risk devaluing the shorts contained within.


The WW II theme of the sixth set:
Pro:
We should be grateful that on such a general public release, they finally got around to including these important historical shorts.

Con:
The WW II theme (outside of one disc) is only window dressing. The rest of the set is filled with regular cartoons. A pity that they didn’t make this a release a fully WW II themed set. The 24 Private Snafu cartoons could have been spread over two discs. Instead, Snafu cartoons were spread around as bonus tracks on previous sets. A missed opportunity, indeed.


*** In summary, perhaps Popeye faired much better because its shorts had been out of the public eye for decades. Popeye was geared to the serious collector and it showed in the elegance of its cover art, menu pages, and bonus material. In contrast, the six WB cartoon sets were caught between trying to please the serious cartoon aficionado while also pleasing the general public that was seeking a video babysitter for their children. With such competing interests the films were made to be the losers. These shorts deserved better. But, worst of all? Ask me to find “What’s Opera Doc?” and I’d have no idea which of the six collections houses it. But, I suppose that doesn’t matter to the scores of parents looking for a video babysitter.
Posted by David B. Levy at 5:46 AM

As far as I am concerned, your criticisms of the Looney Tunes Golden Collection DVD series, both positive and negative, are right on the money. In fact, ever since the first set came out, I have thought that the obvious superiority of a chronological collection would lead Warner Bros. to come out with a new Platinum collection series once the Golden collection series ended.

This would be the series for the serious collector, in chronological order and (possibly) with more historically-based extra features. After all, the work to remaster the films is already done; why not sell them twice? (If the studio had any foresight, the films would have been remastered in high-definition, so that it would be effortless to release them on Blueray disks in full HD resolution this time, but I'm quite sure this wasn't done.)

Of course this would cause wide-spread, fully-justified outrage among Warner Bros. cartoon fans, but since when has the studio ever cared about that? And, sad as it may make me seem, if such as series was actually offered, there is a good chance I would buy it (again) ... and I don't think I'm alone.

Great article - I agree completely with everything you have said here.

I really wish they would make a chronological set available. Also, i can't count more than 2 shorts on the whole series with Pepe Le Pew! Where's the love for the skunk?