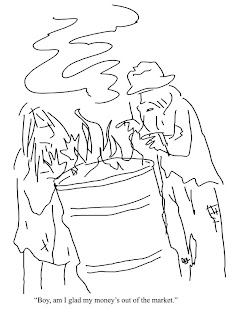 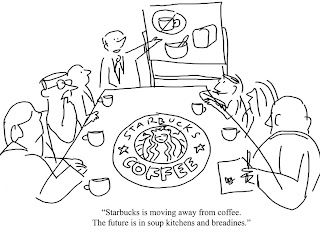 For more than fifteen years I've created and drawn hundreds of one panel gag cartoons, usually revolving around gold fish and their environs. Eight of these gags eventually found a home published in magazines and newspapers across the country. From time to time I would send off a batch of these cartoons to the prestigious New Yorker magazine, but to no avail. This week, through the generosity of a friend, I had the opportunity to present some new non-fish gags to the New Yorker's famed cartoon editor Bob Mankoff. It was quite an experience!

Once I decided to create some new general themed cartoon gags for the New Yorker I had only four or so days in pocket so I had to work fast. A morning trip to the gym proved a handy catalyst to creativity and I found myself with four or five gags to sketch when I got home. I decided to draw the gags directly into photoshop via my wacom tablet. I like the loose feel this imposes on me. My cartoonist friend told me that one needs to present a minimum of seven gags at a shot if they hope to be taken seriously. With such a short window of time available I decided to keep my gag number to seven exactly.

Cartoonists have one hour a week to present gags in person to Bob Mankoff. Visiting the floor where the New Yorker is made was prize enough for me. On my arrival, Mankoff's assistant let me onto the floor and I confessed that it was my first time presenting cartoons. He welcomed me and told me all I had to do was to figure out where the back of the line was. Boy, was he right. There was a sprawl of cartoonists hovering around Mankoff's office. Some had already showed gags. Others were waiting. Complicating matters further was a nearby waiting room that might contain other cartoonists-in-waiting. After ten minutes, it became clear that the last person ahead of me had showed and then it was my turn.

Mankoff welcomed me into his office and asked me about my background. After some small talk he motioned for my small stack of gags. Thumbing through them, he quickly gave me the good advice of avoiding topical political references which might already be dated by the magazine's publication. At least two of my seven gags violated that rule. Moving through the rest of my work, he seemed to initially put two gags on the side for possible consideration. Then he advised me to try a more sophisticated drawing style for my next round of submissions. Getting to the end of my stack, he told me that he had decided not to hold on to any of my gags on the first visit. He asked, "How many more ideas do you have?" I replied that I could do a stack such as this everyday. Best of all, he told me, "You have the mind for this. Come back and show me more."

With that last exchange, I was thoroughly encouraged. However, since nothing is ever a sure thing, I'm making a solemn vow to keep my expectations in check. I got a further does of reality joining the other cartoonists at a lunch that day at a near by restaurant. Among them was a very nice and talented cartoonist who has been submitting gags to the New Yorker for 8 years without making his first sale. Another cartoonist told me that they were submitting cartoons for a year and another had just wrapped up their first month of submissions. They each remained hopeful and inspired to keep trying, although they admitted that they seldom came in on a weekly basis. Everyone acknowledged that paying work and other life commitments make coming in weekly a near-impossible scenario. I doubt I could sustain a weekly submission very long, although I plan to push myself to the (reasonable) limits.

This weekend I took a crack at some new gags based on Bob Mankoff's feedback. I can already see the improvement. Any such creative endeavor returns to us regardless wether or not we make a sale. I'm enjoying taking on this pipe dream because it allows me to better develop as a writer and a cartoonist. And, since animation artists working in the New York area have always relied upon a diverse set of skills and outlets to earn a living, why not add "New Yorker" cartoonist to that list. A fella can dream, can't he?

I love the drawings, David. Personally, I like the simplistic drawing style. . . but that's just me. It's "sophisticated" enough. :)
Congrats on getting the meeting and the advice.


I think it's really cool that you had the meeting with Mankoff in the first place. Not sure if that particular type of cartooning is up my alley, but I can always give it a shot!

Aside from the political references which he told you to stay away from, were there any specific topics he told you to focus on? The New Yorker has a fairly "upper class" audience, so I was curious to know what would fly with him or what wouldn't.

I'm no expert on what they want since I've only gone once and have been unsuccessful at that. A best bet is to read the New Yorker and look at what they do buy. Then, you can see how well you could deliver gags in that vein.

Hey Dave...Keep plugging away. The segment w/ Bob Mankoff on the Charlie Rose show last week was cool, too.