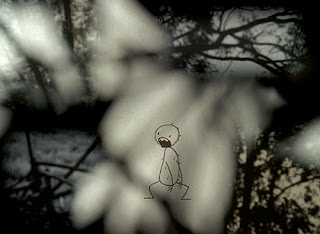 There's a common misconception that the "industry" does something to the animation artist. The idea is that it makes us conform our styles and our independent spirits so that we might hope to be cogs in the wheel at a major animation studio. In reality the industry doesn't do that, animation artists make that choice themselves. Everyone is so busy trying to figure out how Tex Avery timed a gag, Jim Tyer drew, or Mary Blair designed. Sure, we'd have to lack a normal artistic curiosity not to want to figure that out, but to what ends are we prepared to apply that information? What's the end game?

Oddly enough, outsiders to our industry have led the way in making some of the most groundbreaking animation of our era. For the purpose of this discussion, I'm only going to reference TV animation because the incredibly low standards and conformity in that arena. On Nov 19, Don Hertzfeldt came to town for a special set of screenings at the IFC center and the packed houses were treated to a set of unique films by this modern young master of indie animation. During the Q and A, Hertzfeldt revealed he has a TV deal, and one can only assume its for his own pilot or series. The filmmaker now joins a long line of outsiders who have stepped in to create the most original animation on the tube. The list includes Mike Judge (a self taught animator who learned to animate by making the first Beavis and Butthead film in his garage), Matt Stone and Trey Parker (live action film students who dabbled in cut out animation that most animators would scoff at), Matt Groening (the indie cartoonist who's first foray into animation was when he was drafted to dash off short animations for The Tracy Ullman Show), and Tom Snyder (the educational software company owner who devised a show with comedian Jonathan Katz that employed illustrators-not animators to create the series, Dr. Katz).

These outsiders never spent two seconds trying to imitate how Chuck Jones subtly raised an eyebrow, or to discover how Art Babbit broke the joints, or figure what sets apart each of the nine old men. And, they certainly wouldn't care to get into a debate as to the differences between each Pixar release or on how well Lasseter is doing as head of Disney. In contrast, we animation artists define ourselves by those very interests. It's what makes us "animation people." And, it's also what makes us take second place to the trailblazers listed above. They pull their influences out of life experiences as well as from inspirations coming from other mediums such as painting, sculpture, live-action cinema, theatre, etc. Is it any wonder that their creations take OUR medium to places we would dare not dream?

I know there's a degree of over-simplification in this argument. Some industry animation artists also have diverse interests, but I would wager that they tend to keep them out of their animation. This is because we are so busy scrambling to make a living that we give all our effort to our commercial work and leave none of that time or energy to ourselves. With such an equation, how could we be the groundbreakers in our own industry? The outsiders have a further advantage called "ignorance." Since they don't know the "so-called" limitations of our industry, they don't let anything block their creativity. To compete, we in the industry must learn to forget trends, fads, and commercial considerations that hold us back. Its as if we have automatic sensors telling us, "this will never sell," or "this project is too risky to be successful."

The last thirty years has seen the birth and boom of an interest in animation history and its checkered films and filmmakers, rescuing many from obscurity. Some, such as Chuck Jones, were even fortunate enough to live to see it happen and take a well deserved victory lap. I don't suggest we stop searching out our past, nor do I suggest turning a blind eye to where the industry is at today. Instead, I suggest we examine why it is that some of our best contemporary work has come from those who are not saddled by the negative baggage that comes along with being "animation people."

Incidentally, Herzfeldt's latest short, "I Am So Proud of You," (pictured above) is a masterpiece and its mature subject matter and sophisticated construction does animation proud, even though.... at the Q and A with moderator Amid Amidi concluding the screening, Hertzfeldt admitted, "I'm not an animator. I use animation to make films."
Posted by David B. Levy at 4:52 AM

Great post David. What you say is certainly true. I remember reading about how some of the funniest comedians in the US are actually Canadian; the reason being that they as foreigners, they see quirks in the American way of life that American's themselves are oblivious to until it is pointed out to them.

The same goes in any industry, more often than not, the most successful people started their working careers doing something else and 'fell into' what ultimately made them successful.

hey david,
I just wanted to tell you how I appreciate your book "your career in animation" I started my thesis on independent animation a couple of months ago, bill p. told me to check out your book and I am so happy that I took the advice. I can't really say how much it helps me, motivates me and gives me stuff to think about and wrap my head around. thank you. greetz from berlin!
alex

This post seems to be a culmination of what you have been thinking of over the last few weeks. I think within the last couple of weeks (maybe last week) you asked the question, "are we animators who make films, or filmmakers who animate?" it seems to me that with this post, you have hit on the head what aspect is the most important to most of us: FILM-MAKING.

certainly there are a few firms who excel at both (i will say pixar), but great animation alone will never make for a great product (except as 'pure animation'; see below). one can see this at any animation festival. at asifa-east's festival last may, the best-of-show went to a film with animation that consisted of smiley faces: hardly great animation, but an amazing and brilliant final product, and well deserving of best-of-show (i would have picked something else, but i cant complain)!

Thus lies the motivations of the artists that you referenced this week. the style of 'south park' or don hertzfeldt's films lend to making those films great. it is funnier to see construction paper characters with bad animation having sex, than seeing real actors; it's funny to see a stick-figure character crying about his bleeding anus precisely because it is presented in a child's medium (as our culture sees it). artists always work within the confines of a culture. duchamp was a success because he challenged his culture's preconceived notions of where a urinal belongs, and so hertzfeldt and 'south park' (as filmmakers) challenge what cute cartoon characters are supposed to say.

if animators are only concerned with the timing and illustration of a perfect walk-cycle, how can they possibly challenge our culture artistically? i can watch a perfect walk-cycle in any live action film! as i see it, such concerns in animation have more to do with craft than with art. beautiful figure movement was perfected seventy years ago by disney, and it was an artistic statement in 1937. such cannot be an artistic statement in 2008. shouldnt artists move beyond the production of 'great animation'?

one necessary requirement to be a great artist that you touched on, and that was put forward by picasso follows: "it takes four years to learn to paint like raphael, but a lifetime to learn how to paint like a child." another summarized picasso quote relating to this post:

By paring down his characters to stick figures Don simplifies everything - story, emotion, art.
Here, simplifying does not mean making films for only idiots can understand.
It is working towards a purer form of expression, which is a key word here.
As far as I'm concerned, expression is everything.
He has created a situation where he can say what he wants to say without the baggage of trying to be the next Chuck Jones or Milt Kahl or whoever.

What is also often forgotten is that when you are dealing with simple characters like Don's, you have to be very, very smart about getting emotion and feeling out of them.
Folks I think are too quick to equate simple drawings with bad animation, when in many cases it is the opposite.

Hey Alex,
Thanks so much! Hope to meet you some day!
Cheers,
Dave

Hey George,
Interesting points. I think you hit upon something significant. What is animation's role post 1937? Or more importantly, post the Pixar 3D realism revolution? Maybe animation has to develop backwards now, much like drawing and painting changed after the rise of photography.

I don't have any problems with children's animation...(although I did/do struggle with the "un-cool factor" children's films are assigned in the indie world. When was the last time a children's animated film opened in Tribecca? There's a stigma, for sure.

But, I'm completing my third kids film in a row right now..., although its not the only type of film I am moved to make... One should make whatever they are making with honesty and inject more than a nugget of humanity into it.

Good points.. and Don Hertzfeldt said that if his last two films had been animated as realistic CG it would have been a mess. Instead, his approach leaves room for the audience to dream, as he puts it.

"Maybe animation has to develop backwards now, much like drawing and painting changed after the rise of photography. "

I have a friend who suggested a 10 year ban on all animation.
Nobody is allowed to watch, create or think about animation for 10 years - longer would be better.
Then after this absence we all start again from scratch, having hopefully forgotten as much as possible.

You are spot on as usual.
I've been reading and enjoying your posts from the sidelines and always find the your thoughts insightful and inspiring.
Thanks for sharing.

Welcome... very glad to hear you've been dropping by! And, I love your work.. I was in the group that voted to give your show a design Emmy this year! : D