What's Wrong with The Simpsons 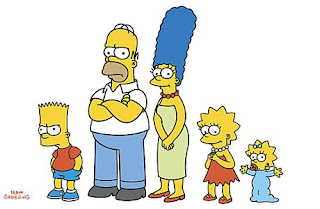 I figured it out. America's favorite yellow family must be vampires. In fact, all of Springfield USA must be vampires too, because nobody has aged a day since season one began in 1989. If time had been a factor, Bart would be around 30 years old today.

Since The Simpsons have been renewed until at least 2013, I think this discussion is long overdue. In theory, it looks like an advantage to have an entertainment medium in which characters remain forever young. However for a show as long-running as The Simpsons, the advantages ended around season 8 or so (and that was back in 1997!).

Once upon a time, The Simpsons WERE set in time. Marge and Homer had an origin story. They had been high school sweethearts in the 1970s. This made sense because Homer was supposed to have been in his mid 30s in 1990. The math checked out. But, nearly two decades of episodes have passed since then and that has not been kind on the reality between The Simpsons' universe and our own.

Live action sitcoms can't ignore their actors getting older. If a family-based sitcom survives long enough, its once cute tots grow up to go to college. Unfortunately, by that point, most sitcoms have long worn out their welcome and try to remedy the situation by adding new tots into the mix. Despite the fact that most sitcoms don't manage to stay as sharp as they once were, there is at least the potential to tell new stories that might reflect the characters' changing lives.

I remember what it felt like to attend junior high for the first time, graduate high school, get a driver's license, go to college, get a job, and how my social world and values changed again and again. Bart and Lisa (and Maggie) are forever stuck in grade school and any attempt to age up their situations would only ring false. That is, unless they were able to grow.

The first deathblow to The Simpsons relevancy occurred with the 1997 debut of South Park on Comedy Central. Before then, Bart Simpson was a role model for underachievers everywhere. He talked back to adults. He got bad grades in school. But, he was really a safe modern-day throw back to Dennis the Mennis, even complete with sling shot in pocket. On the other hand, South Park's Eric Cartman cooked his friends parents and then fed it to him.

The second deathblow was that beyond season 10 (and that's being generous), The Simpsons had said all they had to say and could only repeat themselves with diminishing returns. How telling it was that even the recent Simpsons feature film recycled nearly all its plot elements from earlier TV episode plots. For instance, Homer getting attached to that pig? That was very similar (but less funny) than Homer getting attached to the lobster (Pinchy) from episode "Lisa Gets an 'A'" (the seventh episode of The Simpsons' tenth season. It aired on November 22, 1998.) How about Homer ruining the whole town and making it unlivable? That happened already when Homer made the town a toxic landfill in "Trash of the Titans" (the 22nd episode of The Simpsons' ninth season and the 200th overall. It originally aired on April 26, 1998.) The family losing faith in Homer? Marge and Homer's marriage on the rocks? Lisa dealing with a new love? All tackled in the TV episodes to far better results.

Live action sitcoms debut with their characters being a certain age and (within a season or two) find the balance or blend of qualities that might define that show's voice. As the actors age and grow, the balance changes and eventually every sitcom runs out of juice. The physical transformation of the aging cast makes that change perfectly clear, giving it a visible face. An animated sitcom such as The Simpsons does not show its age so readily. One has to actually watch an episode made between 2001 and 2009 to see the rot just below the surface. By the show's final curtain call, it the bad seasons will far outnumber the good.
Posted by David B. Levy at 5:07 AM

I've heard similar complaints about The Simpsons for the past several years.

Maybe they're accurate, I don't watch enough situation comedies to have a well formed opinion.

What I do know, is the show is still entertaining in its own right. Maybe its not as entertaining as it was 15 years ago -but neither are most of us.

If any other comedy passes my television screen, its gone after 10 seconds. The Simpsons continues to hold attention.

I don't find The Simpsons even watchable by this point. Yet, I continue to appreciate seasons 2 through 6 as solid, near perfect entertainment. Season 1 was enjoyable in a developmental sort of way. Seasons 7 through 10 show the decline that would consume the show as bright talent like Mike Reiss, Brad Bird, and Conan O'Brien (and others) moved on.

The best years blend animated exaggeration with real family-dynamics and a dash of heart. Add to the expert voice work, scoring, and writing. All funny and sharp.

I understand that its rare for a character to age in an animated sitcom and that we expect such characters to remain as they are for all eternity... but, if my premise is that the show has (through shere longevity) outlived its own inventiveness, then the age-stuck characters remain one more reason why the show has sunk into the ground.

None of this is a matter of life or death... of course.. just a musing on why or what happens when a show outlives itself.

You are on Spot, Dave. The Simpsons lost its greatest appeals after Season 8. Those first eight seasons were golden in writing, characterization, and humor. Since then, the show became a parody of itself, with Bart being less interesting, Homer getting more attention, even as his character has simply gotten meaner.
It occurred to me some time that maybe the child characters should age now. It would be a huge dare, but I'd be curious to see what the majority of viewers would think. I think its time for Maggie to start talking (perhaps like Marge's sisters or something).
Now instead of having golden seasons, we have seasons with only a few good episodes. And the humor runs out on them after a few watches. I mean really, how is it funny that Homer likes to strangle Bart for no reason? It was funny when he had some idiotic reason to do so.

The difference of opinions I think can be chalked up to "times have changed."
The newer Simpons episodes do not build on the format that the original generation of viewers understood and enjoyed, which is the executive producer James L. Books-style of humanistic comedy, where character counts just as much as undercutting the treacle with a good joke. We grew up with shows like Taxi, MASH, Newhart, Mary Tyler Moore, Cosby, etc., where shows required a certain amount of heart (I can hear the collective groan at my unironic use of the word).
The Simpsons has changed to reflect the humor that a new generation responds to. The Family Guy, American Dad, et. al., and even South Park (which is saved from mediocrity by a dead-on social commentary that the Seth MacFarland creations lack), all trade on a certain amount of shock, breaking taboos, and pop culture references, without ever having to make the audience feel anything about the characters.
Is anyone worried about Brian when he leaves the family or upset Kenny when he dies, etc.
Of course not. We're not meant to love these characters.
When Lisa has to find and say goodbye to Mr. Bergstrom in "Lisa's Substitute," we do feel for her and we hope she'll be ok.

In anycase, I totally agree with you. As an expert on all things undead, I can safely say that the Simpsons are suffering from the very same deathlessness that makes vampires so inhuman in the fist place.