The Most Important Element In a Pitch 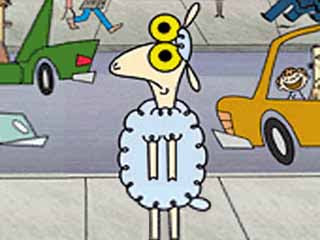 ASIFA-East recently held a pitch workshop event with career coach, packaging agent, entertainment lawyer, and teacher Jim Arnoff. The point of the event was to help would-be creators better sell their creations (not to teach one how to create a winning cartoon pitch itself). The problem with such a discussion is that it may lead some to believe that by following one specific plan, they might reach their goal of having their own series. Don't get me wrong, the event was informative and helpful but, I could tell that most would-be creators in the audience operated under the assumption is that (creatively) they already have it in the bag.

The truth is that most projects pitched are half-baked at best and most creators are not ready for the responsibility of making a winning cartoon should they even get a deal. The most responsible among us try to make themselves ready for the day when they earn a cartoon series. I keep coming back to a wonderful quote by my friend, Fran Krause: "Don't expect anyone to pay you for what you haven't yet done yourself."

No pitch element (shy of making an entire pilot yourself) shows how a creator and his/her team will blend all those ingredients together to guarantee that the end result will live up to the promise of the pitch. Its no wonder that (for a deal to be struck) it often comes down to a creator's reputation and the strength of their relationship with the development executive/network.

Mo Willems is a great case. Cartoon Network didn't wake up one day and decide, "Gee, I need a show where a non-verbal sheep gets chased around by military agents inbetween bursts of sketch comedy." Instead, all they knew was they wanted to make a show with Willems. He had already proved himself with countless films for Sesame Workshop as well as his own Nickelodeon mini-series, The OffBeats. Willems also had a strong friend and champion in Linda Simensky, (who was then a Cartoon Network development exec), ensuring that he was wooed by Cartoon Network much in the way a hot rock band might be wooed by a record label.

The idea he proposed (as clever and fun as it was) might have been the least essential element of his green-light. Willems' track record beyond Sheep only proves how smart Cartoon Network were to gamble on him in the first place. He went on to head write Mr. Warburton's Code Name: Kid's Next Door just before launching into the stratosphere as the most successful children's book author since Dr. Seuss. ***image above from Sheep in the Big City.

Jim Arnoff (speaking as a packaging agent) advises that would-be creators aline themselves with a production company and build a strong team of creative partners before pitching. While I can see the value in that, I believe the danger of such a plan creates a handful of additional gate-keepers to block one's path. Is building such a team the most important ingredient to selling a show? In all fairness, I'm not suggesting that Jim Arnoff believes this is the case. He merely offers a road map by which some projects are sold.

Bill Plympton often tells students not to start their own studio businesses right upon graduation. He argues, they won't have enough contacts and experience to succeed that early on. Instead, he suggests such students first cut their chops working in the industry for at least seven years. I'd argue for similar advice for would-be creators. First work in the industry in a variety of capacities, preferably for episodic animated series. Learn production and see what nuts and bolts come together to build a crew and a production process, and what it takes to make a show delivery. Along the way, its okay to develop and pitch your own productions, but, the key is to understand that the most important thing to develop (towards the goal of selling your animation creation) is yourself.
Posted by David B. Levy at 5:58 PM

The idea that has always stuck out to me in every event I go to on pitching or series creation is that in some ways I wonder if animation artists are putting too much focus on getting a network to accept and agree to fund their projects rather than finding a way to do it themselves. If you have the interest in creating a project, if you really believe in it and it's viability, why not try to make it yourself? Obviously having the power of a network behind you is huge, but it seems to me that having a body of work you independently created would make it easier to establish the kind of unique creative personality and proven track record of success networks are ultimately searching for. Obviously, this can be done in tandem with the kind of job Plympton is talking about (thinking of yourself, Pat Smith, the Krauses as examples). And at the end of the day, what's more critical to success than work ethic?

1)
"I could tell that most would-be creators in the audience operated under the assumption is that (creatively) they already have it in the bag."

I'm not sure I entirely agree with that.
I think most would be creators in the audience felt "Oh god, this is a lot more complicated and corporate sounding than I was hoping".

2)
Tim makes a very valid point here.
Having a project greenlighted represents status and money (two very worthy things) but it also means you are probably not raising the same child you were hoping to adopt.
The flip side - independent film maker - is an incredibly worthy, noble role in which anonymity and pennilessness abound, but in which you can do exactly what you want, keep your own hours and create to your hearts content.

Does hiding at home making your own little films mean you don't think you have the balls to do more, or are too intimidated and weak to step into a corporate arena.

Does the desire to pitch to the networks mean you are creatively walking a comfortable middle ground, never to express yourself fully?

(I actually think it's more complicated than these black and white statements but they're matters I've certainly considered myself).

I have pondered the same thing: Independent films versus pitching. Independent films have given me much deeper satisfaction. For one, there are no gate keepers. The only danger for me was letting commercial influences creep in (or take over) my indie films. Those turned out to be a drag and I learned my lesson from them.

While indie films and pitches seem like two different paths, the indie films help grow a creator's voice which may be applied in the pitching arena if he/she so chooses.

I am not of the belief that pitching is complicated or a mystery. While there are tons of exceptions to any "rule" you may lay down, there remains the one constant truth that you need to develop yourself as the most important pitch element.

Wow. Great blog, David. As much as I agree with you and Plymton about the importance of cutting your teeth, there seems to be a recent trend w/right-out-of school kids, toy designers or graffiti artists with fresh(er) ideas (I suppose) that the "new breed" of development execs salivate for. Frustrating to those of us that have put their networks on the map--but as I pass my tenth year in the industry, passing in and out of favor with the rotation of execs and new network mandates, I wonder what role I'll play, if any, in these new creator's show(s).

Best of luck with your upcoming book!

Building up yourself is a strong idea that many may overlook when creating a pitch. Its easy to get lost in the creative aspects of your pitch project and overlook the Network/investor's point of view from a financial aspect.

An investor will always have to look at you as a whole, when its time to invest the big bucks. David made an analogy to rock stars. When 50 Cent made his first mainstream album, he had already had a ton of music out there on Mix tapes, our equivalent would be independent films.
There has to be no question to the investor that your reliable, so what better way to show that then with a proven track record?