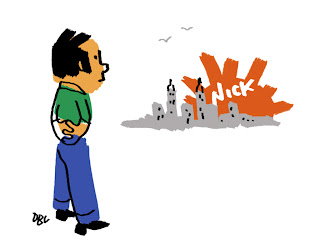 Another sign of a weakened animation industry (and the overall weakened economy) arrived last week when staffers working on the 4th floor of 1633 Broadway were summoned into a meeting where they were told that New York's Nickelodeon Digital Animation Studio would be closing its doors before the end of the year. The largest pool of workers among them were in mid-season production on Nick Jr's Team Umi Zumi, which is a as-of-yet unaired series made completely in-house with Flash, After Effects, and Maya. The workers will be on hiatus for an undetermined amount of time while the producers work to re-establish the series at an independent animation studio to complete the rest of the season order.

New York's Nick Digital Animation studio first sprung up in a few cubicles on the 32nd floor of 1633 Broadway, which was on a floor above it's sister studio, MTV Animation. The maiden project, "Blue's Clues," was a new form of production: full in-house series production via Adobe After Effects, Photoshop, and Power Macs. The studio that grew around the series (adding such productions as Little Bill, Gary the Rat, This Just In, Fridays, and Blue's Room in addition to many pilots) provided my (near- continuous) employment between the years 1997 and 2007. Having been away from the studio for the last year and a half, its semi-abstract to learn that the studio is closing its doors. Even though I didn't work on the studio's final series, it was nice to know that they were employing so many animation artists and support staff. It was nice to know that the studio was there- period.

What role did a large studio like Nickelodeon play in the New York area animation landscape? For one, it paid some of the best salaries in town, and (for the majority of its run) gave its temporary workers full benefits such as health care, dental, and 401k plans. It offered long-term work on high profile projects in a stable work environment with a genuine Human Resources department. When independent studios (such as Curious Pictures) set up their first large scale digital series productions, they followed in Nick's example by providing fair wages and benefits packages.

Whether or not you ever worked at Nick Digital Animation, this event effects you. There is a giant pool of expert workers that will be all looking for work at the same time. There is one less major studio where graduating students might find work. While there are a smattering of new projects rising in the city, so far, no single production will be able to absorb this entire crew. Lean times like this have always thinned out the ranks. Many will drift into other lines of work or move to other parts of the country.

I don't think we need any more examples that our jobs are temporary in this industry. Even accepting a job on a series with a long-term contract is by no means a guarantee that the bottom will not fall out from under you. There is no continuity to be found at any one studio. The continuity has to come from you. Times like this test us to be resourceful, to look after our own fates, and (of course) to value, appreciate, and look after each other.

One might take stock of what got them into this business in the first place. I doubt many of the recently laid off Nick Digital folks would answer, "I always wanted to work in a compartmentalized capacity preforming repetetive tasks on a preschool animated series till the end of time." Chances are, some people wanted to work in features, on music videos, write the great American novel, start a comic strip, create their own content, or build their own studio business.

It should be inspiring that Tatia Rosenthal (a Nick alumni) left the close knit studio a long time ago, forsaking the comfortable path for a chance to make her own stop motion feature. Her feature film, $9.99 opens in Los Angeles on December 12. It was the result of many years of unbelievable sacrifice and it would not have been possible had she stayed at Nickelodeon. In a similar way, those recently let go might just look back at Nick Digital Animation closing its doors as the best thing that ever happened to their career. And, if that's the case it will be because they (like Tatia) made something happen.
Posted by David B. Levy at 7:54 PM

I relate 100% to what you say about this possibly being a great opportunity for the Nick animators.

I left a similarly "comfortable" work environment where I was also performing "repetetive tasks on a preschool animated series" exactly one year ago. I started teaching swimming lessons and managed to push out my first independent film. One year later, I'm nearly done with my second film. Hopefully, these things will make money for me one day, but in the meantime, I'm much happier and more satisfied.

I'm doing what I want when it comes to filmmaking and that'll always be fulfilling whether or not it lines my pockets with gold.

Sorry to hear that about Nick Dig. We got the boot from Word World as well, 2 weeks ago- right in the middle of a (paid for?) production season. And last year, the same at "Nate the (Not-so) Great."
Thanks for the wisdom concerning the impermanence of these jobs. i came out of illustration, where it was a week or two, at best, but somehow, I've always done fine, and been grateful to do the work I do. The worst thing about it can be the worrying- especially when it's past, and you realize you never needed to worry...so don't worry, keep showing up, follow your passion!

One of my new friends (and may I add -- a new found mentor) said the same exact thing! He was always a MAJOR advocate for people creating their own art and perhaps, we can rebuild and become stronger due to these unfortunate times. As you've always said, fear can often times be a great motivator. Looks like this is a great opportunity to see just how brave us NY animators are.

As for the people who called the Nick Digital Animation department their home -- you guys will be in my thoughts and prayers. Granted, we'll all be competing for the same jobs, but we need to stick together more than ever before. I'm a firm believer that unity will keep us strong. :)

Actually, the studio isn't gone. They "closed" the studio in order to rename it as Nickelodeon Creative Advertising.

Wait a second - I found out that Nickelodeon resurructed Nick Digital in mid-2009!