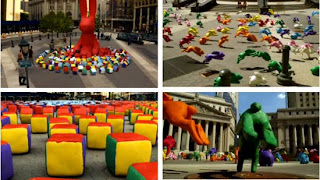 I have been working outside of the "studio system" in NYC animation since 2007. I have not worked in-house at any studio in the last two years, although I've been consistently working as a freelancer from home. I thought I didn't necessarily choose this path, but, then again, maybe I did. Thinking back, I didn't apply for any of the mass studio jobs that employed many of my friends and colleagues in this two-year period. During this time, there were in-house staff jobs to be had on such series as The Venture Brothers, Little Einsteins, Wonder Pets, Third and Bird, Super Jail, Team Umi Zoomi, (the short-lived) Nate the Great, and Word World.

All these series put together created up to 400 jobs for animation artists and I didn't apply for a single one of them. I can't fully explain why that is. Maybe it was time to get out off that path? While I enjoy many of the series listed above, I didn't see myself working on them for a variety of reasons. It just worked out that at the end of my last studio job at Nick digital I got the opportunity to work remotely, directing Assy McGee while working from home.

Nobody has a crystal ball to guide them in their career. Opportunities happen your way, sometimes by chance and sometimes grown from your work/reputation, but, the ones that are the right fit are the ones that you have made yourself ready for. When I began this current period of working from home, I had no way of knowing that the NY animation scene (and the economy itself) was about to be in deep trouble. It turned out that it was a good time to have diverse clients, to not have to depend on NY animation in-house staff positions as the sole source of one's livelihood.

Since 2007, my employers have been based in L.A., San Francisco, Boston, and in New York City. This has been a key component of my survival as the NY animation scene has sunk into a slump. I'm reminded of an animation friend of mine who once declared that he, "would NEVER travel for animation." This friend said this in response to me using valuable paid vacation time (while on a staff job) to travel to festivals such as Ottawa and Annecy. In fact, my friend proved his sincerity when a film he made landed into competition at a major festival and he chose not to go. In contrast, festival travel to me (whether on paid vacation time or not) is something I HAVE to do. I NEED to be around other filmmakers. My friend has long since left the animation business. I think his declaration to not attend animation festivals revealed that his passion was not in this field. Another example of how people weed themselves out of working in animation for the long haul. I don't judge or think negative of these people. Everyone has to find their happiness and I don't presume animation is suited for everybody.

When I started in this business in 1995 I looked at the ASIFA-East community as the ENTIRE WORLD. That was it. If I got a film into the ASIFA-East festival, it meant that I'd offically arrived. These were my heroes and my peers. Acceptance by this NY animation community was EVERYTHING to me. By 2000, my curiosity of the larger world animation community finally got the better of me and I attended my first Ottawa Animation Festival. There I met Cartoon Network executive Khaki Jones for the first time, and (eight years later) she recommended that Carl Adams hire me to direct animation on his Adult Swim series Assy McGee.

Another (more immediate) result happened as a result of attending my first Ottawa festival. At the festival, Fran Krause introduced me to a group of British animators (which included animator Hotessa Laurence) and we all shared some nice times over the course of festival. Months later, these British animators came to NYC and arranged to meet up for a drink with their new animation friends. At the bar was a terrific stop motion animator I had never met before, named Eileen Kohlhepp. Upon our introduction, I assumed she was from out of town, but it turned out she was a New Yawker employed at MTV Animation. Eileen has since become a good friend and we have made it a point to meet for lunch a few times each year to catch up and compare animation war-stories. She's also been a frequent guest lecturer in my SVA career class. We sometimes laugh about how it took British animators that we met in Ottawa to connect us in our own backyard. Sometimes you have to travel far away to make a local connection. (Note: Eileen Kohlhepp was an animator on the incredible Sony Bravia commercial pictured above!)

I think the recent spate of layoffs and studio closing in NYC will remind many to make the time to travel to animation festivals and/or make personal films/pitches/scripts/art. I have already heard stories of some of the former Little Bill/Little Einsteins/Wonder Pets/Team Umi Zoomi artists that are now fully engaged working on personal projects that they had previously long put off.

When times are good it is possible to pack-walk from studio to studio, working at full time in-house staff jobs for years at a time. Nobody has a crystal ball to predict when those days might return, but I can say (with certainty) that it will enrich your life and your life's work to invest in yourself. And, while that may start with making a film, it can also start with buying a plane ticket to Annecy this June, or Ottawa this October. Its a source of wonder to me that my connections to the animation world outside of New York have allowed me to stay working and living in New York.
Posted by David B. Levy at 12:01 AM

Since leaving Australia I've done most of my freelance for countries I've either:
a)Never been to
b)Don't happen to be in at the time.

I should care to make Ottawa this year if the immigration department deems me worthy of a green card (so I can not only leave the United States, but return to it afterwards).

Such a good post, Dave. So much of keeping steady work, I think, is showing that you care about the industry and the people in it and what they're working on. The great fringe benefit is that you get to see some really good films and become inspired just being at these festivals and events. It's win win!

Elliot, I hope you make it to Ottawa. It would be twice as fun with you there!

Great post Dave! It's far too easy nowadays to sit around and feel sorry for yourself when the studio system fails you. This was just the thing I needed to read this morning. It seems your class never ends! Thanks.

Glad the post was helpful to you. A big lesson for me is that studios (big or small) don't and can't provide career-long stability. That has to come from us, in good times and bad. The good years have a way of making us forget that. We get soft and comfortable. But, a nice thing happens after years and years in the biz... you start to see the cycles of ups and downs, and you have benefit of having built a bigger and bigger system of contacts that can serve you well.

really great post Dave the past few weeks I've been thinking about what I'm going to do next in terms of work and travel and well, everything and this post got me pretty pumped to picking up more freelance as well as hopping in my car next fall and traveling to the great white north :D