On Buddy and Bakshi 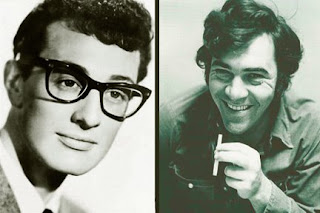 What kind of career would you have if you only had 2 & 1/2 years to make your mark? That's exactly how much time Buddy Holly had from the moment his single "That'll Be The Day" rocketed to number one on the charts. While at SVA, I had the opportunity to take a contemporary music class taught by the Rolling Stone music critic Billy Altman. It helped me meet one of the elective requirements for my Bachelor's degree. One day Altman played us music from a double disc set that turned out to be the Buddy Holly Collection. The next class I came up to him and said, "Your last class cost me 30 bucks." He shot me a puzzled look before I explained that I had no choice but to buy the Buddy Holly Collection on the way home.

As far as I see it, there are two tragedies to the Buddy Holly story: his sudden death and the fact that it has come to define him. Another way to look at his legacy is to examine what he accomplished in so short a time. Nobody has a crystal ball to reveal their fate but, Holly certainly didn't waste the time he was given on this Earth. The body of work he left behind is astonishing in its quality, originality, and durability. How often can we say the same about singer/songwriters that have the gift of decades of time in which to develop their talents? Holly is one of my creative heros as well as a reminder to make every day count, both in life, and in career.

On that note, I seque to a great anecdote told by Ralph Bakshi, as interviewed by Don Duga at SVA in 1998. To a standing room only audience of students and industry professionals, Bakshi shared a story I will never forget. He had recently visited an old High School friend who had long given up on a career in the arts. Bakshi complimented a wonderful painting hanging on his friend's wall, a painting that his friend had created decades ago.

Bakshi said to his friend, "That's a great painting. Did you ever think about making another one?" After this, Bakshi explained to us that its a LONG life and that we should make each day and each year count. Unlike the case of his friend's painting, if we are serious about our art, we should never be finished. Our dreams need not remain hung on the wall and under glass.

Its now ten years later and Bakshi is still not done creating. He paints on a regular basis and rumor has it that he still has animated projects in the works. His long-life legacy was recently celebrated in a terrific coffee-table style book, Unfiltered: The Complete Ralph Baskhi by Jon M. Gibson and Chris McDonnell.

My teacher, Billy Altman, finished off his lesson on Buddy Holly by playing a song called "Learning the Game" from Holly's "apartment tapes." For those not in the know, these were the home recordings found in the singer's Greenwich Village apartment after his untimely death. A short while later, I was able to track down my own bootleg of these recordings, but it was not until a month or so ago that they were officially released as part of two new retrospective sets: Buddy Holly Memorial Collection and Buddy Holly: Down The Line- Rarities.

Its nice to see two of my creative heros recognized with these special career-spanning tributes! I can't think of a better way to re-examine these unique talents. Now, if only someone will erect a statue of John Ritter next to the Lincoln Memorial... I'd be all set.
Posted by David B. Levy at 12:01 AM

Having spent a little time with you over the last few months it is interesting to me that you find so much joy and inspiration in the music of the past.
I feel this music informs your storytelling and art in a very specific positive way.

With few exceptions, I have no nostalgia for music before My Aim Is True, and find classics to be stifling.
Music and animation are practically the same thing, I think, and I know music informs just about every single thing I ever draw.
I am always on the look out for new music and am constantly frustrated.

All film is an extension of music. All performance, in fact, stems from music.

Does that mean that animation has to be akin to gossamer teeny-bopper skiffle?

"Does that mean that animation has to be akin to gossamer teeny-bopper skiffle?"

No, of course not.
For the most part it's fluff, but that's the same of any creative industry (perhaps any industry).
The majority is digestible and the rest is interesting.

Also - it's occurred to me that my post about not having nostalgia for music pre 74 was a little broad.
I'm mostly talking about pop music here.
I'll take honest folk music any day.

The interesting areas for me are those all-too rare moments where great art and commerce are joined together. You see this with The Beatles entire output and lots of Disney animation from 1928 to 1942, just to name but two examples.

And, I know I'm not the only one in animation who draws upon far more than just animators when thinking of heros and influences.

I don't think that any artist only pulls from the field in which she produces. It is easy to see the influence of music in early Disney (obviously in Fantasia), but I am even more interested in his ill-fated collaboration with Salvador Dali. Certainly, musical composers have been pulling material from mythology, literature and religion for at least 1000 years. The same can be said for visual artists.

In spite of Mr. Cowan's ignoring of almost 1000 years of music, there is always something new to be found in the past. (Consider so much American and European art music from the past forty years that is based on taking a new slant on Medieval music).

Hey George - I revisited my comment there, mate.
Perhaps you missed it.

In all of the arts I search for the new new new, but never forget to embrace the genius in the past. Elliot painted his first comment with too broad a stroke.

Bakshi was put down by the animation community when he was at the top of his game. He singlehandedly kept the medium alive in the US. I wish he were doing more today.

Buddy Holly went up like a rocket and came down as fast. I was barely conscious of him at the time - though of course I knew his songs.

I'm just going to reiterate my point here.
Dave's post referred specifically to Buddy Holly - the near beginnings of modern rock/pop.
This period of music, and much that followed, aren't on the whole of much interest or inspiration to me.
Of course I recognise that there are some amazing things from this time which is why I initially said "with few exceptions".
So there.

Why does Elliot hate music?

Is it because he's a foreigner?

I don't hate all music.

I'm just glad to know who was playing all that Buddy Holly last night at ASIFA. It was a pleasant surprise what with me wearing my Buddy Holly pin and all.

You're right. An artist is never truly done with his/her work. They need to leave a legacy for others to appreciate and enjoy, whether it be actual work or inspiring new artists to greater heights. This is just the kind of thing I needed to read. Thank you very much. Long Live Buddy and Bakshi!