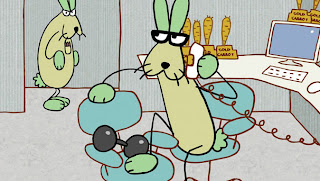 I never know what will touch a nerve in my SVA animation career class. So, I was very pleased when a healthy debate erupted based on the "Desktop Dilemma" section of Chapter 7 in my book, "Your Career in Animation: How to Survive and Thrive." Assuming you have the book (I can dream, can't I?), I'll give you a minute to look that section up. In short, it was a cautionary tale of how an animation artist could damage his reputation by adorning his wall space and desktop computer with swim suit models and scantily clad teen starlets.

Look at any studio's animation cubicles and offices and you'll find personal items such as posters, toys, family photos, doodles, and other decorations at most every workstation. The stuff we surround ourselves with projects an image. Its a public display of our tastes, humor, and personality. But, how much should one share at the workplace? Even when it comes to the creative workspaces in this industry?

In response to the "Desktop Dilemma" story above, one female class member explained that if she sees pictures in the workplace that objectify woman, it feels like a personal attack. It makes her feel as if she is being looked at as a sexual object around the office.

The particulars of office culture comes into play when trying to understand this complicated issue. A preschool series tends to have young children, mothers, child development specialists, and female network executives walking through the office on a regular basis. Its easy to understand why it would not be desirable to have anything potentially offensive on display.

One male student objected and felt that the images described in "Desktop Dilemma" were not offensive to him... and, besides, another studio in town that animates edgy adult swim and comedy central series' had much worse on their walls. The difference, I explained, was that the edgy studio was an independent company, set up to reflect the taste and personality of its owner. For some, that might be reason enough to not want to work there. Not everyone is the right fit for every situation. And, on the male students first point (he did not understand what was offensive about swimsuit pictures), I told him the issue wasn't his personal definition of what was offensive. Instead, the point is to be sensitive that somebody else "might" take offense.

I'm not sure I got this point across either. Later that night (after class), a trusted friend suggested that for men that didn't understand what could be offensive about female swimsuit pictures posted at the office,...maybe they would understand it in other terms that might be offensive to them. There's a long list of potentially offensive material that I wouldn't recommend displaying in the workplace: images that are racist, anti-Semitic, anti-Muslim, anti-Christian, homophobic, etc. Think of the what might offend you and understand that there are some women who might be offended by your sports illustrated swim suit calendar or copies of Maxim magazine.

The bottom line is that the office, desk, chairs, stapler, computers, and walls, are not your property. You are only keeping the seat warm for the length of time you are on a project. You are working in someone else's home in a highly collaborative process staffed by men and women of all kinds.

I tried one last time to reach this male student. I asked him, "Is it worth the risk of harming your reputation to prove a point that you're entitled to express yourself no-matter-what the circumstances? Not quite sure if this was understood either, I asked, "What are your goals on a job? Are you there to conduct a sociological experiment to determine what percent of a staff might be offended by your wall-hangings?...Or, are you there to be an animation artist working in harmony with the rest of the team?
Posted by David B. Levy at 12:01 AM

Agreed Dave. On the positive side, if you can avoid potentially offensive material, the things you have in your workspace are a great way of telling the people you work with more about you.

Artistic influences, favorite directors, favorite characters, favorite actors, favorite shows, favorite music, sense of humor, non-work interests, personal life. If you're new on the job, sharing these things can help people get to know you. It can spark unexpected connections with people you might have thought you had no common ground with. Just starting out? The books, magazines, notes, photos, etc. you surround yourself with can tell your peers AND management a lot about where you want to go, your level of seriousness, and the ways you're preparing yourself for you goals.

I have pictures of Dave Levy in his swimsuit pasted up all over my office.

Well the issue, also, here, is that we're talking about the WORKPLACE. It's not necessarily a bad thing to express yourself in your professional space, but perhaps it's worth investigating why you feel so strongly that you need to.

Still, I agree with Tim, in that it can be a nice efficiency in getting to know the people your working with. But there are lines that are dangerous to cross... political ones, for example. Saves those for the after work get to know you bar fights.

That male student will understand the point when you drop a D- on his report card.

No wonder they call you "The Iron Fist".

Linda, it's me! We're alike in many ways, but me and Tim ARE different people :)

Totally agree on the political line. It's one people seem to cross more than others (at least at places I've worked). Even when I agree with you, I'd rather save those conversations for after hours.

A non-trivial, non-opinion note: the workplace display of "demeaning" pictues of women can lead to very serious trouble for the employer and the employee - it's called sexual harassment. (Hostile work environment.) At a major studio it could lead to immediate and non-appealable termination of employment for the worker posting the pictures. Trust me on that.

Note that pictures that are "demeaning" to other demographic cohorts can also be cause for termination, depending on the employment practices of the particular employer, etc.

It is not wise for employees to think of their workspace as "their" space - it isn't.

While I might debate certain sections in your book, which I thought was excellent overall, the swimsuit section is not one of them.

The real issue here is why did you share your swimsuit photos with Elliot and not with me? Can't I at least get a jpeg?

Mike... how did I mess that up when you name was right there when I wrote my post??? Sheesh. Thank goodness your brother's as cool as you are so it can't be taken as an insult.

Buzz makes a great point on which I wish to elaborate. Not only does it put you and your employer at risk legally, it also puts your producer in the position to have to make a reprimand. It's true that Producers are there to protect you from big, bad, scary departments like Legal and to keep the workplace safe and comfortable for all. But why make more work for them?

To provide balance on the legal issue, say a woman was demoted, or even terminated because the men in her office were offended that she had a swimsuit photo of Daniel Craig on her desktop, does she have a case? (Although in reality, if a woman really had a swimsuit photo like that, many men, far from being offended, would probably find it amusing, and feel encouraged to flirt with her. Yes I know, we're pigs.)

But the message I got from Dave's anecdote was to pick and choose your battles, whether you are committing a social faux pas or not.

This is very much a "common sense" type of issue. It's never a good idea to offend anyone in the workplace if you can avoid it. Won't that always impact us in a negative way? And as Buzz pointed out, there can be very real legal implications for an employee and an employer.

We have our whole lives outside of work to express ourselves. This should be a trap that is easy to avoid.

That kid needs to be told "sex doesn't belong at work; it belongs at home" regardless if he thinks bikini ladies on a computer desktop is offensive to others or not (which, if he doesn't realize that at that age, there's not much hope).

It's true that places that work on material of certain themes and intensities, like Super Jail, have an obvious atmosphere that will definitely have complimentary decor (I mean, if you were working for Playboy, the idea would go along naturally). But there's a vast majority of neutral work places where very specific tastes of life are bad show.

I'm glad this subject was in your book, Dave, though it's too bad some need that common sense reminder for workplace etiquette.

I consider work station decorations points of inspiration (wow...what a sentence!), so when someone has SI Swimsuit Edition themed screen saver at a studio for youth programing...that's inspiration in the wrong place!!

You (and your class) present some very interesting points. It's important to express yourself in the workplace, but I agree that if it makes part of your team uncomfortable, what good are you really doing? Thanks for posting about this. :)