It's a Small World After All 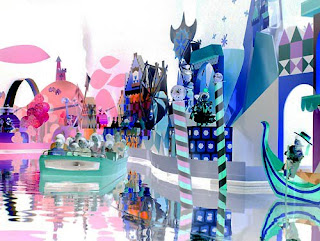 Most of us working in this business are constantly in the state of looking for work. Even when we're working, we know the importance of keeping an ear and an eye out for the next gig. Much of the time, I don't even notice making an effort at this because at some point it just becomes second nature.

The hardest time to look for work is when one is just starting out in his or her career. One has to build their experience, web of contacts, and reputation- all of which (eventually) make the job hunt easier. Although I've logged 15 years in the animation business, I remember those first few attempts to find work as if they were yesterday. Two stories are at the forefront of my memory and I'll think you'll soon see why.

RUDE AWAKENING-
Sometime around Spring of 1994 it dawned on me that I would graduate SVA in a year and an internship might not be the worst idea. One of my classmates did several internships and he had the habit of repainting the back of his jacket to match whatever studio he temporarily called home. He was like a walking billboard. While that was a bit silly, I admired his boldness. I knew an internship might help me make real-world connections at studios and that might make it easier to find a job post graduation.

An SVA instructor gave me the name and phone number of an MTV Animation producer, which I called during a break from my part-time data entry job. The producer did not pick up her phone so I left a short message. A couple of hours later my mom called me to tell me that Linda Simensky had just called our house. I had never heard of Linda Simensky (she'd be my teacher a year later) but, apparently the phone number I had been given was wrong and actually belonged to Linda at Nickelodeon. My mom told me Linda asked that I call her back. Not only was Linda incredibly friendly to a nobody like me, she even gave me the correct phone number of the producer I was looking for at MTV Animation. I never forgot her helpfulness, and it inspired me to return the favor in helping others make their first industry connections.

Imagine my shock when she screamed at me (no exaggeration) when I called back the following week. "Don't call here! Do you understand??!! I'll call you when we're ready! Don't call here again!" she yelled, before hanging up.

It was pretty traumatic. Did she think I was someone else? Maybe. Either way, I didn't call back.

A year later, in Linda Simensky's SVA career class, we took a tour of MTV Animation, which was then still in its first location at Columbus Circle. And, which producer do you guess gave us the tour? The smiling producer was none other than the woman who had treated me so rudely on the phone.

I never said anything to her about it, nor did I mention anything to Linda Simensky. But, I did get the lesson of how small this business is. How foolish this producer was to muddy her reputation. I think one can tell a lot about a person by how they treat the least important people. Certainly I was the least important person in her universe the day I followed her instructions to call her back. Do I still remember her name all these years later? You bet I do. But, luckily we haven't overlapped since, except in periferal social circles.


PHANTOM CELL PAINT-
In the Fall of 1994, I tried a different track to look for work--SVA's job placement office. They had a scant few job listings for animation back then and even less for somebody with as little qualifications as me. One lead, for a cell painting job, seemed promising. I had done cell painting on my own films and thought I had the knack for it. I called the producer who owned his own animation studio downtown and we set up a day and a time for me to come by for an interview. He asked that I bring samples of cells that I'd painted so I decided to spend a few days practicing my technique. By the time of the interview my confidence was up because I had some very clean samples to present.

Imagine my dissapointment when I got to the studio's floor and found its door locked with nobody inside. I waited for an hour to no avail and then I got to a pay phone to call the producer. No answer. I left a message and waited around for another half hour. I called again the next day. No answer and no call back. That was the end of that.... until one day three years later when I was working as a storyboard artist at Nick Jr's Blue's Clues. The creator's of the show were in need of a new producer and (knowing that I knew a lot of people through ASIFA-East) asked me if I knew a certain producer they were considering. Guess who that name was?

I told them about my encounter (or lack of encounter) with this producer and it was all they needed to hear to cross his name off the list. As that ride at Disney World claim's, "It's a Small World After All."

IN CONCLUSION-
I am glad to say that these early encounters didn't at all represent the majority of the people I would come to meet in the animation industry. Most of my experiences have been very positive, but I would suggest that we help set the tone for the experiences we'll have based on our own attitude.
Posted by David B. Levy at 9:48 PM

You learned your lesson well and didn't call in advance when you first came to my studio. Somehow that worked in your favor (as would usually not be the case) since we needed someone desperately at the moment you arrived.
Although you did interrupt my lunch break on that day - and I've remembered it forever after and will get even some day.

I'd watch out for Michael, he bites! Fun to read those stories, they're a good reminder to always be respectful. I had similarly disenchanting interactions with some "big names" as a student, but some of those folks have turned to out to be okay after all.

I doubt most professionals would consider the first producer in an altogether negative light. It may have been a miscommunication regarding who should call whom, and you may have rung up at the worst possible time.

It's only fair to give her some slack in this incident.

Personally, I try to get back to everyone and make time. But I'm no Linda Simensky and there are probably occasions when I'm impolite to young artists.

And for the second story, while it sounds like shady dealing -it also reiterates the stereotype that Nickelodeon was an insular and incestuous studio which would make important hiring decisions based on a single personal anecdote.

Blue's Clues was a Nickelodeon production, but we who made it were not Nick employees and that story I shared doesn't represent Nick corporate culture. I would also argue that we should assume it was not a single anecdote that made that decision, but that it might have helped make the decision that the producers were already leaning to make.

What you suggest is insular and incestuous, I would defend as a very normal moment in any production.
People give recommendations and pass judgments this way every single day and over our careers we are on all different sides of this equation. Sometimes we are asked our opinion, sometimes someone is asking about us.

As for the first producer, anyone can be on their best behavior when talking to a client or the press or whatever, but it speaks volumes about how they treat the least important people at any random moment. That's where the real person appears. I agree that some slack should be given that producer, but I only give that slack on the mistake they made assuming that I was someone else. So, if that was the case, the worst thing the producer was is unorganized, impatient, and careless. Hmmm... still not good qualities for a producer to have.

When I first met with Richard O' he was laying around in his garters smoking crack.

I'm actually someone that is currently in your shoes back in those early years; although, unlike you, I was unsuccessful in finding a placement, but that was many years back.

I have also received some negative treatment from some of my contacts for my master’s dissertation. So, when that day comes to meeting those contacts in person, I hope that they might be treating me with some more importance then they did back then- I'm now currently doing some freelance work for a company from a design agency.

Thanks for sharing those lovely memoirs about your first attempts at looking for work. You have given someone like me the hope to keep trying in the hope of finding some work. Maybe one day I'll be sharing my first 'gigs' on my blog in the distant future.

so true dave, in Montreal after I left the triplettes, I went to animate on a few commercials in town and eventually onto cinar , my first and only "big" studio experience. It shocked me quite frankly, I consider myself to be a pretty friendly guy but encountered a handful of quite xenophobic
workers, who had been there for years. Two years later I was the supervising animator at a small shop called sardine- and who were dropping off portfolios for me to review when cinar layed off almost anyone? You guessed it - not that it completely nullifies their chances, but when you create a team you have to factor in personality.
I know that the supervisor / director / artist role is always flip flopping , so that person who you hand that scene to clean up or inbetween may be asking you to do the same one day. Plain and simply everyone is as important than the next, in and out of animation, so be respectful!

Thanks for sharing your experiences David.

I will be graduating from my Animation School very soon, and these kind of encounters(however scant among the positive ones) can be surely very helpful to at least understand that a lot of people go thru the grind before getting that first elusive break!

hey Dave, what's the beautiful image on the top of this post (pink/blue negative image?)