Survival Is Not a Dirty Word 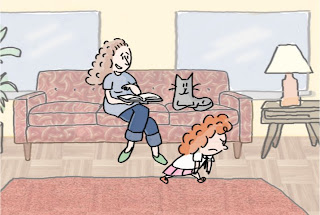 ***Note: Above image from a pilot I just finished for a local production company

There is something undeniably romantic about the animation artist going into business for his or herself, forming a studio business, and taking control of their own destiny. The alternative is to become an aging artist forever drifting in the freelance pool. But, the problem with that idea is that a day rate doesn't necessarily go up from year to year or from job to job, and there's an ever-restoring crop of new blood coming in that can best the aging worker by working cheaper and for longer hours.

I few years back I took on some freelance animation work from a series that needed help. It was high focus work that often took up to ten hours a day just to keep on schedule. Happily, I thought the pay was very good and reflected the difficulty of the work. A small studio in town was also helping in the same role. A few weeks into the job I had a conversation with a partner in that studio and was surprised to hear him complain about the low pay. We compared rates and found that we were making the same amount of money. As a studio, they had to bring in someone to work the job, split the profits between three partners, as well as having to cover the cost of studio rent, electric bill, etc. As an at-home freelancer, I had far less overhead to worry about and, as an individual, found that the pay was more than fair.

The above story combined with my subsequent adventures working from home for the last three years have me wondering how the small studio is able to survive now-a-days. As an individual artist working in my living room, I've won bids to directed three pilots, three series, and a handful of other individual spots or promos. The work has been enough to sustain me and I've been able to hire other artists on a project-to-project basis. Recently I secured another large gig that is large enough to bring on an assistant for two months and still bring the job to completion on budget and on schedule. And, while the pay is fair for me as an individual, I don't know if a studio could have taken on the same job and made any profit. More likely they would have done the job as means of paying Manhattan rent for two months. I do want to point out that, while no two budgets are the same for any studio or individual, I am not underbidding based on working from home. I think that would be a dangerous practice that has potential to damage the whole industry. I always bid for a fair market price, although obviously sometimes we can misjudge the amount of work or aggravation that goes along with it.

Some small studios have been able to survive in this town because they wisely avoid over expansion. When they have a big job, they bring in temporary help. They maintain just enough workstations in-house, and have the option of allowing some freelancers to work at home. As an at-home freelancer, its no different for me, except that I have minimized the risk even further by not having any additional rent or utilities to pay. Perhaps most importantly, I'm not responsible for a single persons livelihood other than myself.

When my first book, Your Career in Animation: How to Survive and Thrive was published in 2006, I was working at Nickelodeon and, somehow, I got the nutty idea to send a copy of my book (through inter-office mail) to Viacom super medial mogul Sumner Redstone. He e-mailed me a personal thank you to all of us who had helped delivery Blue's Clues to such success. Then sent me a signed copy of his auto biography.

I had never read a book on a business figure before, but I was happy to find that the book was thoroughly engaging. Redstone is a fascinating man, beginning his career as a scholar turned military code-breaker in WW II. After which, he built an amusements company with his father, becoming a leading force in drive-in theaters across the nation. Redstone had made sure that his company always owned the land occupying the drive-in theaters so when trends changed the business to indoor multiplex theaters, he could rebuild on his own land. There's lots of interesting stuff in the book. Much failure and mistakes mixed in with all the success.

The point I got out of the book was that a real business person like Redstone, puts in a 7 day work week. And, this is no different than many of the founders of small animation studios in this town. The difference is that Redstone's business is BUSINESS. He's in the business of profit through media empire. The small animation studio exists to enable its founders to enjoy some degree of independence. They control what jobs they are willing to take on, the ones that might mesh with their style or aesthetic, and that can be achieved with their available resources. It's like being a traveling minstrel in earlier centuries. I don't think many of them got rich, but they enjoyed a lifetime earning a living through their talents and craft. The struggle of staying afloat amid month-to-month unknowns goes with the territory and each acquired job is like an extension--keeping the dream alive that much longer. The model of the small studio and my own adventures working from home remind me that SURVIVAL is a noble success in and of itself.
Posted by David B. Levy at 7:13 AM

You're right about the seven-day work week for us moguls. Happy Memorial Day (on a short work break at my PC).

I'm sure Sumner's at work, too.

Hey - Was working over the weekend and just now saw this - great blog Dave ! Will try to add to it more tomorrow. . .

I think its funny that you both commented in with proof that you were working a 7 day week! I was too!

I remember something that Karl Lagerfeld said. It was to the effect that he loves his job, and as such, doesn't take vacation time; vacation time (or time off) is consolation for people who don't love what they do.

As you meet more and more people you start to realize that to work in one's chosen field is a real rare blessing. Talent, ability to recognize opportunities, and LUCK, all factor into it. Even when outside influences suck, I still consider myself and anyone who's working a day to day existence in a chosen realm, mighty lucky !

Don't take this the wrong way but I didn't even realize until now that you wrote that awesome Career in Animation book! I refer to it often! Thanks!

I'm so glad you enjoyed the book! My next book is due out Sept 8. You can check it out now at amazon.
It's very much written in the same spirit of the last book, but with a singular focus this time.