The Trouble with Ambition 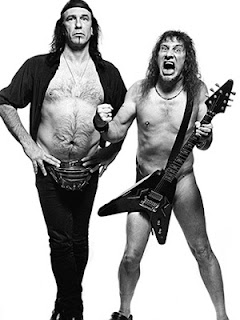 I'll never forget a quote I heard from a famous actor who said, "Acting is the only career where if you make only $60,000 a year, you are considered a failure." I think this applies to anyone in the entertainment industry. Instead of acknowledging the success of one simply working in one's chosen field, they are measured against what they have not yet achieved: an oscar, a $20 million film, house-hold name status, etc.

Most animation artists are not trying to be J-Lo. We chose to work in a very difficult industry where to simply be able to pay your bills for the year might be a sign of success.

I've been thinking about this topic after going to see the new documentary ANVIL! The Story of Anvil, which is all about a sad-sack pioneering heavy metal band from Toronto that never achieved the success it was after. The film is very entertaining and the band, in particular its leader named Lips, come across very sympathetic. Yes, the whole real-life story takes on a very This Is Spinal Tap-feel (and the filmmaker plays up that angle often), but at the heart of this story are a pair of 50-something rockers that have not yet given up on their dream.

Other members of the movie audience howled with laughter at the band's many misfortunes on the road and in their career. It was as if this band existed just to be laughed at. A band-members' sister seemed to echo this with her point that its sad for the band to still be trying for success. She thought it was clearly over and she painted them as losers. I sat there wondering what she had achieved in her life. What ambitions had she pursued over a thirty year period? What was her passion? When a butcher works cutting meat for thirty years, does this make him a loser? What is wrong with a working rock band that is still pursuing their dream thirty years later?

ANVIL! The Story of Anvil was a funny film, but it was also full of hope. The message was that dreams are ageless and have the power to outlast naysayers of all stripes (including family members, industry executives, and members of the movie's audience that were laughing a bit too loud and a bit too often.)
Posted by David B. Levy at 10:00 AM

Thanks to your heads up on this film, I ran out and saw it myself and really loved it.

I think there was a great deal of humor in some of those onscreen failures and for me that was part of the charm of the film. Seeing Lips spin out of control with his closest friend only to come back and admit how badly he needs that mans friendship was humorous. Still, his ability to admit mistakes and remain dedicated to family and friends are the backbone of the story, the uplifting message that avoids being schmaltzy because it comes with such heavy doses of humor and never takes it's self too seriously.

Your comments and that film remind me of the book "Working" by Studs Terkel. It's a fascinating collection of stories from gas-meter readers, professional football coaches, plumbers, taxi drivers, sex workers and more: their struggles with monotony, human dignity, ambition and everything in between.

sounds like "american movie." one of my favorite docs of all time. Same idea, but with an underdog filmmaker.

By the end of the film you're really cheering for the protagonist, despite his many shortcomings (lack of money, talent, social skills).

It's the voyeur in all of us that wants to see these people try, fail, succeed--to at least do something we'd never dream of trying.

you've just got to admire sisyphus.

Amen. To be working and surviving is the first step of the goal and sd be appreciated for yourself and others.

Why is superstardom, rich and famous the only measurement in some cases? If so, I've failed at everything!

Actually, at this point, I really don't want that.

I've read a lot about this film but have yet to see it.

To me, the real trouble with ambition is that even when you have achieved stardom, quantifiable success, or some small personal triumph you are likely to STILL be unsatisfied...to want more. It can be surprisingly difficult to enjoy and be pleased with life's successes large and small, without quickly wondering what's next. It keeps you motivated, but sometimes you've got to remind yourself of what you have accomplished— family, work, etc.

You are so right. I have to remind myself to enjoy or appreciate whatever successes I've had. I tend to focus forward, always trying to move to the next thing. My problem is compounded by that being a necessary thing just to scrape by these days. We have to make things happen in this biz.

But, its also a natural and healthy thing to be creatively restless. Satisfaction is the kiss of death for an artist, no?

I loved this movie - yeah, it really makes you think about all of those big questions about pursuing your dream.

Similarly, I'd recommend the book "Like a Rolling Stone" by Steve Kurutz, where the author follows around a Rolling Stones tribute band for a year. It's got a slightly different twist, since you can only get so popular playing other people's music.

"I'd recommend the book "Like a Rolling Stone" by Steve Kurutz, where the author follows around a Rolling Stones tribute band for a year. It's got a slightly different twist, since you can only get so popular playing other people's music."====

I think that says a lot about the notion of what it means to be famous or considered a "star" in pop culture terms, because on the other hand there are many successful (even "famous") classical musicians and jazz musicians who are famous precisely because of how they play other people's music (Bach, Mozart, Duke Ellington, etc.)

I hadn't heard of the film before reading your post, Dave. (living under a rock?!)... -haha

So, I journeyed over to youtube to check out the trailer... Wow!

Looks amazing!... even that 1 min and 30 secs packed a lot of power, humor and emotion... I cannot WAIT to see this flick!

That level of passion and dedication!... and I love how you drew the parallel from the music world to our own lives in animation.

It's really all about truly loving to do that one thing, and essentially being unable and unwilling to do anything else with your life. Amen. :)