Note: above image was the logo from my first pitch to score a network deal.

We're mad as hell and we're not going to take it anymore! That was the original title for my new book, but the publisher convinced me it might be a good idea to have the word "animation" in the title, and so it became "Animation Development: From Pitch to Production." And, since the book hits shelves on Tuesday September 8, it's much too late to change our minds.

In all seriousness, is there anyone among us who doesn't believe the system for pitching and development is seriously flawed? Even the development executives interviewed for my book know this is so, admitting that the way networks green light and develop animated ideas into pilots and series is too slow. Well, that's a start, but its certainly not the only problem. Not only is the process by which networks review and develop projects slow, it's also often expensive, wasteful, and rife with the wrong people in charge––giving the wrong notes, making the wrong decisions, and otherwise getting in the way of the process in any number of ways. Oy!

So what is the appeal? Why should anyone want to stick their head into the network lion's mouth and pitch a project? In the world of pitching and development, even the best scenario is filled with potential pitfalls. In 2007, I landed my first development deal for a preschool project I created called "Fiona Finds Out." It was sort of a preschool "Myth-busters," allowing the home viewer to learn and play along as Fiona (a pint-sized Owl with an inquisitive mind) and her friend Buster (a flighty bat who believes if it looks like a duck it's a duck, without waiting to see if it walks like a duck or sounds like a duck) debunked preschool sized myths such as: Is there a monster under my bed? Will I grow a watermelon in my stomach if I swallow a watermelon seed? Etc...

Despite what I thought was a no-brainer of a creation, the first pitch went terrible. Imagine my surprise when I saw that one of the development execs at the meeting was someone who had also created a pilot that year. Knowing how the network did business, this meant that if she were to green light my project it would put me in direct competition with her own pilot's chance to go to series. And sure enough, she worked hard to poke holes in my pitch during the meeting. Outside of her response, the rest of the execs weren't that warm to the project either. The pitch went over like a lead balloon.

For a couple of months the pitch just sat on the shelf, until I thought to show it another network. I emailed that network's development exec but was shocked to read her response. "I don't want to look at another network's rejects. I don't like being second banana. Why didn't you come to me first?" she asked.

As Charlie Brown might say, "Good grief!" I thought the exec was acting a touch irrational so I decided to write her back some words of reason: "I went to the other network first because I had a long term relationship with them. They rejected my project because they have very specific needs and I had created something outside of that box. I don't believe your network is second banana to anyone. Your network is the one that set the standard all the others follow. I hope you reconsider taking a look at my project. I'd love to show it to you."

Surprisingly, she wrote back immediately: "You're right. Sorry about that. Yes, I'd love to see your project."

I decided to email her all my pitch elements instead of sitting through another bad pitch meeting. A few weeks later she read my materials while on a flight and wrote, "I like this... a lot." She wanted to show it to her network president when he was in town later that month. I asked if she wanted me to be there for that meeting but she felt more comfortable just casually showing the project to the president on her own. I trusted her judgement.

Two weeks later she emailed with the great news that they were offering me a deal and wanted to put my project into shorts (or interstitial development) with the goal of making six shorts that could be aired in-between other programming, a sort of mini series that could test out the viability of my series. I was delighted and quickly engaged the services of a lawyer to negotiate the deal.

While we were waiting for the contract to appear I got a call from the network's L.A. office, where a different exec wanted to speak to me about my project. "I really like this and think it could be great."

"But," (she didn't disappoint) it's a pass because we already have something like it going to series this Fall."

Very calmly I explained that I was confused because at this very moment a contract was being drawn up and my project had been green-lighted by a NY exec under the guidance of the network president. I could see her face grow scarlet even over the phone. "Oh, I'm so sorry. Please ignore this call. My mistake."

The NY-based exec (the one who had green lighted my deal) left me a voice mail apologizing up and down about the misunderstanding with the L.A. office. She assured me that we were still on and that a contract was underway. And, indeed it was. But, what a reminder about the trappings of development in the mean time! A creator's first lesson is to manage his own expectations, to proceed with each stage knowing that it's only real when it's real.

My lawyer negotiated a great deal for me and over the year-long first option period, I wrote all six scripts which were met with approval. My exec called on a Friday and asked me to start contacting some local studios so we could start getting bids on the shorts. We were going to start production soon. But, by Monday (as it so often happens) the wind changed and the same exec called with the bad news that they weren't going to make my shorts after all because the network didn't want a science-based series right now.

The roller coaster ride of this project was over and I appreciate it for what it was. For a year the network paid me very generously to further develop my project and write six scripts. Not a bad thing by any standard. And shortly after they axed my project, the same exec brought me in as a head writer to develop a subsequent series at a giant media company. Even when a project dies, there's still value to the experience––new career notches for the resume.

"Fiona Finds Out" was squashed before pilot but, it was but one opportunity. I'm not naive enough to believe that one day the networks' development processes will be foolproof. The entertainment business has always had its share of short sighted people, more afraid of losing their jobs by making waves than they are passionate to champion what might be the next big thing. But, so what? Somebody is going to breakthrough with the next "SpongeBob," "SouthPark," or "Simpsons," and that someone won't have been scared off by the seeming futility of it all. That someone could be you, and it is the key goal of my book to increase all our chances for a direct hit.

As long winded as this post has been, it's merely the tip of the ice berg on the subject. To expand the conversation, I invite you to join us on September 15, Tuesday at 7 PM at SVA, 209 E. 23rd Street, 3rd Floor amphitheater for a special panel discussion/book signing to mark the release of "Animation Development: From Pitch to Production," featuring panelists: Carl W. Adams (co-creator of Assy McGee), Amid Amidi (cartoonbrew.com), Janice Burgess (creator of Backyardigans), Fran Krause (creator), and Debra Solomon (creator). Hope to see you there! 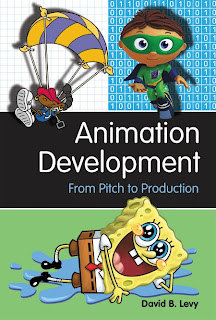 I'll be getting my copy!

Thanks for all of this information

I look forward to reading the new book Dave. If it is full of nuggets of wisdom like this blog entry, it will be great.

Have you considered animating Fiona Finds Out in your spare time and putting it on the web?

I think that's a very good idea. Thanks!

I am looking forward to the book, amigo. Wise words, as always.

Great post Dave! I ordered my copy and am looking forward to tearing thru it and learning a thing or two. :)
Hope all is well!

Hey Dave, It was great meeting you the other day at the panel. I'm already flying through the new book. I like your casual style of writing, it makes for an easy and fun read. Thanks for putting all of this info together! Hopefully I'll run into you tomorrow at 2 Art and grab a beer after.