Not Drinking the Kool-Aid 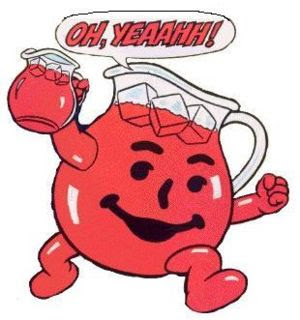 I went to a lecture given by a present day Disney animator whom, in response to a student asking him what he thought of Jeffrey Katzenberg and Michael Eisner's claims that 2D animation was dead, answered, "2D didn't die. It just went underground." The audience (of mostly students) seemed to eat that up. Isn't it a tad bit funny that the animator answered one absurd statement with another? Underground is such an odd term. It makes me feel like a fugitive on the lamb. At any moments the cops could close in and declare me irrelevant. After all, my work is not up there on the silver screen. How dare I even exist?

Okay, okay... I'm getting a little carried away. But, let's accept (for a moment) the premise that any animation outside of Disney 2D feature animation is underground. That makes Disney the establishment. And it ain't never been cool to be that. Just ask a 1950's beatnik.

Secondly, Disney is in the nostalgia business. Creatively they are a dog chasing its tail––self-referencing up the yin yang. But what should it mean that animators are back at work making 2D Disney features? And, besides Walt's signature logo, what connection does the new film have to the company that lost its visionary leader in 1966?

The real power and excitement behind a new 2D Disney film is legacy––the illusion of continuity to something we loved. For a moment we could kid ourselves and imagine what it must have been like to be around in 1941, attending the premiere of Dumbo. That's the magic we want for our ticket money and that's impossible for today's Disney to deliver. But, they have the talent to deliver something new if only they were allowed to.

I don't agree with the misguided comments of Katzenberger, Eisner, nor the Disney animator that declared that 2D animation had gone underground. Instead, I'm with Ralph Bakshi who has said that Disney perpetuated a con on the animation world by suggesting that they were the only ones who knew how to make an animated feature––that it had to be done the Disney way. And, at the very least we can forgive the original company for holding that attitude. They earned that right through an amazing period of artistry and innovation. But, that doesn't mean that I have to drink their Kool-Aid and give that same regard to today's Disney. However, I'm happy they have jobs and are making films. I wish them even bigger success than they enjoyed in the 1990s, all the while knowing that some of them couldn't care a fig about what was going on in animation outside their gates. See my point? They sure are hard to root for...

In the years between "Brother Bear," and "Princess and the Frog," despite 2D animation going underground, I didn't loose inspiration––thank you very much. And I don't measure my self-worth (or even the worth of the medium in which I work) based on what Disney is doing or how well they are doing it. I'm too busy trying to build something of my own, as are many of my NYC animation friends and heroes.
Posted by David B. Levy at 9:13 AM

I agree with everything you say here except the first paragraph.
I love the notion of danger and malcontent associated with "underground" (even if it's a complete fantasy).

Great post.
I get the impression that here in the UK, 2D animation was never quite so strongly associated with Disney that anyone had thought it died or even gone 'underground' once Disney stopped doing it.
But I'd really like their new 2D feature to do well regardless, if only to help more large-scale 2D projects be given the go-ahead.

I'd be real nice if another company was able to step it up and fill Disney's shoes besides Pixar. The underground bit does make me feel inferior. Independents just don't get any recognition among main stream.. Tis by luck I found out Mystery Team by Derrick Comedy, who is a Youtube spectacle had made their own movie was playing in select theaters. I never Rolled-on-the-Floor-Laughing so much!

underground or above ground, Disney or not, it's great that '2d' is still around but even the term 2d is changing- a friend of mine animated special fx on the princess and the frog in toon boom harmony using a cintiq tablet. I'm glad that people are still drawing wether it be with a digital pen or a col erase- although I will admit I do miss the days of getting a nasty paper cut, paper ball wars- having worked in the digital end of 2d the last few years.

James,
I think British animation through the ages proves you right. From Animal Farm to Yellow Submarine, Monty Python (purists will chastise me because Terry Gilliam is American) to Bob Godfrey, Watership Down to Aardman, England really has its own special animation history and tradition.

I just wanted to send a personal thank you for all that you have done. I would have sent this in a snail mail, but all I can do is send this through a comment in your blog, but I feel this needs to be said

When I mean all that you have done, I mean all the nuggets of wisdom you drop off to us students. I'm still working on my my AA and (hopefully) finishing at SVA, so I really have no idea of the industry I'm dedicating myself to. That can get daunting, heck, even frightening sometimes looking at all the goals I have to complete in order to get to were I want to be, but then I hit up your blog

You have the most helpful blog posts I've ever read. You give a good insight into what I have to look forward to in my career, and unlike some artists on the internet (Not naming names!) you provide calm, collected, and funny stories about your work, instead of taking small jabs at other artists in your posts

I just wanted to thank you for all the great posts and I can't wait for more!

I'm not sure why there's all this anti-Disney commentary here. The animation in Princess and the Frog is often gloriously rich. There aren't too many places that we can see that done anymore and too few people who can actually do it. Any step in the direction of full animation has to be applauded - even if we aren't doing it and even if the "Disney" name is attached. The medium's in its death throes, and a more impartial judging is necessary by all of us. That means actually seeing the film before criticizing it. Otherwise it's negativity for the sake of negativity.

Hi Michael,
I can't speak for the commentators to this post, but I applaud the idea of full animation and that Disney is doing it again. But, I don't buy the attitudes that sometimes go with it, especially when it makes everything else compared to full animation or Disney animation a second class citizen.

Did not the best innovations in the medium always happen when we looked forward? That's how Loony Toons was created. They couldn't ape Disney so they did their own thing. I wish Disney gave themselves permission to do that...to redefine where the 2D feature could be today. Maybe when I see Frog I'll think they did just that. I'll keep an open enough mind to find out...

Maybe Disney needs another division (like they had with Touchstone pictures) where they can take chances to innovate. That would be the kind of self referencing that would honor Walt's company most of all... the idea to push the envelope.

Thanks very much for the kind words. Glad the blog is of help to you! Hope to see you at an ASIFA-East event sometime. Be sure and say hello!