Being Your Own Advocate 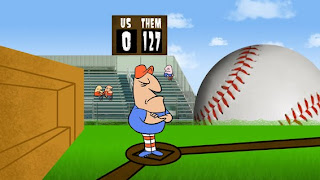 *above art and design by Elliot Cowan for one of my 2009 Electric Company spots.

It's 2010 and the local animation "industry" has many of us (hopefully) scratching out a living (typically) by freelancing for a variety of employers during the course of a year. Think of it as high-stakes musical chairs with animation artists leaping from one gig to the next, sometimes working at home, sometimes in a studio. This reality makes me think of a cautionary tale, one that might help somebody navigate this challenging situation.

At the start of this story, a young animator is working at a new studio on a six-week animated pilot production. At the conclusion of the pilot, the studio chief tells the animator he'd like him to come back in four months to start on a two-year project. Good news indeed, but this animator took the "we want you to come back in four months," to be a firm contracted obligation. In his eyes, it was an official start date.

The following week, a different studio contacts this same animator and offers him a five month contract to animate on a series––starting immediately. Over the phone the animator tries to accept the new offer, but decides to honor the other studio by mentioning that he can only work up to four months (not the full five) because he's due to return to the other studio. On learning of this, the person trying to hire him reneges the offer. After all, why hire someone who plans to leave a job early when you can find someone who will stay the whole run? When someone leaves early it causes problems on a production. It means finding a replacement at the eleventh hour, someone that has to be trained from scratch.

So, instead of this animator having a job to report to until his two-year contract comes up, he has nothing. Shortly after this experience, another studio tries to hire this same animator to work from home on a series. It is a seven month job, but just as in the other story, the animator turns it down because of his "start date" on the two-year contract.

With hindsight, we can see that this animator turned down two real jobs while he waited eight months for a job that was supposed last two years, but that only ended up lasting one month. Nobody has a crystal ball, but the lesson is that, especially (in times such as these) where jobs are precious, we have to be our own advocates.

This animator's mistakes were many. One, he took a far off job offer as being a firm commitment, not realizing that it was a one-sided commitment. When that studio had to keep changing the start date, they did. It didn't bother them to know that they had originally told this animator four months. That had just been an estimate. It was not a written contract. The studio, as a business, did what it had to do. Second, when the next studio tried to offer him a five month contract, he could have taken it. He never needed to mention the two-year job's start date, especially since he had no reason to believe that date would stay firm. He could have started the seven month job in good faith, with the plan to give them at least two weeks notice if the two-year job started as planned.

Third, he could have taken the seven month job offer after the mistake was made losing the five month job. And, although the salary and span of that job still didn't compare to the two-year gig, the project was for an older audience––so taking on the job would have given the animator important new samples for his reel, which was full of only preschool series samples.

Don't get me wrong. I respect that the animator was trying to do the right thing in honoring his original employment offer. He had good intentions and was bending over backwards to be honest. My message is that someone can be honest to a fault. Besides, you can't really be honest by holding true to a start date by which you have no control over. Experience in this industry shows the opposite––that start dates almost always get pushed by two weeks or more. A bird in the hand is worth more than a two-year job in the bush. These are tough times for this industry, but we can make it even tougher on ourselves if we choose.
Posted by David B. Levy at 9:12 AM

Complicated stuff.
I've had to turn down work this year (because I already had work on) not knowing if it was the right thing to do, or if I should have taken it on in the evenings or what exactly I should have done.
It's worked out well for the most part.

Whoever this young animator is, I feel for them.
I probably would have done the same thing 15 years ago.
It takes experience to grow some balls working in the media.

As we've discussed before, I'm sure, this complex habit of studios booking you months in advance is a tricky one and a bad habit when it's a tentative booking.
Personally, I always suggest a booking and cancellation fee although nobody has taken me up on it yet*

Elliot,
One thing I have done with long term booking is to tell that employer, Yes, with the caveat of, "let's reconfirm as we get closer. Hope the timing works out."

That way I'm dealing with reality and not an unrealistic burden of staying available. My bottom line is that studios do what is best for them and the individual should operate under the same understanding. But, always in a professional way, of course.

This is something that has always existed for the freeleancer.

Back in the early 80's Rankin-Bass offered me a job overseas supervising one of their action-adventure series. (I think it was Silverhawks.) While thinking about it, I was offered Dr. DeSoto by Weston Woods. I gave up the big money in Taiwan, and chose to stay in NY. The decision brought me an Oscar nomination and a completely different future.