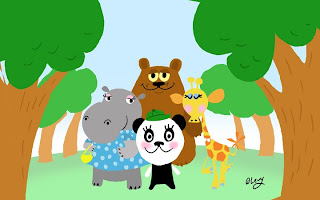 A life in animation brings certain realities. On the negative side it's an often-unstable living. On the positive side is the privilege of a life spent doing something you love. If you want animation to do more for you, like give you the ability to buy a house, have a family, take a vactation once in a while, then you have to do MORE in animation. You have to network, keep your skills up, work and play well with others, and grow your talents outside of the realm of a paycheck. The less you do in all those areas, the more brilliant you'd better be to make up for those deficiencies.

As for me and my weaknesses? Where should I start? I'm the guy that Howard Beckerman, a wise and dear friend of mine, used to refer to as "someone who can't draw well but has great ideas." And, you know what? He got the "can't draw well" part right, and hopefully I'll still prove myself on the "great ideas" part. If Howard could see my weakness, so could others, including (most importantly) myself. On the first day of my first full-time job in the industry, at Michael Sporn's studio, I was so ashamed at my inability to draw a simple character in a few poses that I covered up my surviving drawings (the ones that didn't get crumpled into the garbage) with blank paper. All the studio's employees had to pass by my desk on the way to the lunch table and they each uncovered my drawings a little further until all my shame was exposed clear as day. Nobody offered a high five and there was no, "Hey! This guy can draw!" compliments.

These were all artists I respected and I wasn't fit to breathe their air. After the trauma of sitting through that experience the studio's affable production manager at the time, Robert Marianetti, gently asked me, "What did you show to get hired here?" The message was clear to me. I was in trouble. And, whether or not my job was truly on the line, it was important that I BELIEVED it was. I took home the model sheet, drew the characters every night until 3 AM, studied the storyboard for the pilot we were working on, and emerssed myself in the seemingly endless hours of animation that Michael's studio had completed in previous years. Little by little, I clawed my way out of the abyss and it was hard not to get emotional two weeks later when Michael promoted me to work in the studio full-time, hiring someone else to do my previous duties as studio runner/messenger.

I don't share this story to show that one can make up for a critical deficiency within two weeks. The point is that ANY day you start is where you begin. For me it was owning all the hard work that I HADN'T done up till that point and doing something about it. It's a good many years later and I'm still on that mission, to overcome my weaknesses, to try to make a contribution to this industry, and to simply keep my place in it. I would have never guessed, before my career began, that owning my weakness could prove so motivating. It's become the cornerstone of my philosophy.
Posted by David B. Levy at 5:13 AM

David, thank you so much for such a timely article. Drawing has been the bane of my career and it's something that has held me back for years. While I have compensated by focusing on the technical side (and made a good living at it), my inability to draw competently has prevented me from bringing my own personal projects to life on the screen. After crashing through a mental block during an ten-week figure drawing course last winter, I've decided to redouble my efforts and (re)learn how to draw and draw well in 2010--no matter how much time or effort it takes. Thank you for the encouragement to face my fears and become a more well rounded animator!

I still remember to this day some words of wisdom Faith Hubley, my storyboard professor at the time, told us on our first day of class. She told us that anyone can draw. From day one in kindergarten, we are told how to draw and if it we draw it wrong, we are told how to draw it right. If the house or the stick figure does not fit into society's preconceived notion of what a drawing should look like, then we were drawing it wrong. And so kids grow up into adults who think they cannot draw. Faith's films weren't traditional by any means, but I would never say she could not draw. Beauty is in the eye of the beholder. To this day, when people here that I am an animator, some of the first words out of their mouth are that they wished they could draw, or that they can't draw for @##$T@. And always when I hear that, I pass along Faith's words of wisdom.

I think that advice from Emily Hubley is the other side of the coin, but I would caution it with: if one wants to work in a commercial capacity with their art, as I was trying to do at Sporn's (in my story), than I need to have the chops/skills to draw commercial. I need to be able to have traditional drawing skills. In that context how I like to draw a house is not why I'm there. My job is to be able to work to assignment. Emily's advice is very encouraging and appropriate to the individual looking to blaze their own trail. But, I think it is important to know which is appropriate for which.

great little post David...
You've dispensed lots of good info here... makes me think about some of the untapped potential in all us as artists...

This post and the class you are teaching me and my classmates is throwing into sharp reality the fact that I need to get my act together and do some self-motivated practice/work...especially in the area of drawing. I used to love to draw and did moderately well at it...then the Wilson's hit and I haven't drawn since. I am happy to say that this entire course has encouraged me to start up again! And once I get the cobwebs out I think I shall regain and -dare I say it- surpass my former glory. Thanks!

Excellent article - as an animator just setting out on my professional life and looking for that all-important first gig, this couldn't have come at a better time.

Ive been stuck and down in a rut with my drawings for the past couple of months. I almost given up and slowly it just gets a little "bit" better, and this post really lifted me up and if anything justified my effort.

Thanks for sharing this story.

David, thank you for sharing such a poignant moment. I've really been struggling with my acting and blocking choices this semester. My profs are these incredible animators from Pixar and I felt that shame when they saw the progress on my shot last night and felt such doubt in my abilities afterward. Your article has given me the just the right dose of encouragement. I’m ready to own up and start again.