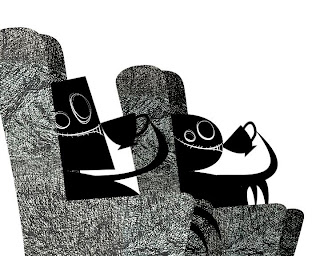 Elliot Cowan is one of my favorite animation artists working today as well as a good friend of mine. I was recently privileged to sit on an animation development panel with him, moderated by the industry savvy Terence Gray (the Executive Director and founder of The New York Television Festival), on the subject of animation development on April 20, 2010 at the nifty Showbiz Center Cafe on W. 21st Street in NYC.

Long before I wrote a book on pitching and development for animation, I had attended many such panel events and no matter which city or country they're in, the same audience questions keep coming up. Some of the most commonly asked questions have to be, "Why can't there be more adult animation on TV? And, will my adult animated project have a chance?"

The meaning of "adult" in this context is the inclusion of violence, sex, and other sophisticated adult themes, much like you might see in a typical episode of original television on HBO. And, it could imply the inclusion of a season wide story arc that gradually unfolds over many episodic outings, even if the episodes themselves can be otherwise self-contained.

In North America, mainstream animation on TV and in theaters tends to be family or kid oriented. That's the biggest market where the most money can be made. Other avenues such as animation on Comedy Central, Cartoon Network's Adult Swim, and prime time animation on Fox cater to a more adult crowd but focus primarily on comedy. So, does this mean that there is no place for "adult" animation as described above?

My go to answer for this oft-repeated question is, "Who was clamoring for an X-rated cartoon showing cats in compromising situations back in 1972? One that was based on an underground character with little mainstream public recognition? None of that mattered to Ralph Bakshi who, through sheer force of his will, got that project sold, made, and distributed to profit and acclaim. To top it off, Bakshi had never made a feature before. He was not a household name nor a major name in the entertainment industry. What part of that was easy, or even probable? Just as Bakshi did––it is your job to figure it out if you want to break ground and make something nobody has seen before.

Another audience member made a short film (intending it as a series pilot) but wasn't sure who his audience was. Elliot asked him some sharp questions:

Elliot: "Who did you make it for?"
Audience member: "Kids, but I want their parents to enjoy it too."

Elliot: "So, your audience is PG."
Audience member: "Yeah, but somebody told me that my stuff was too violent. I don't think it is. At one point I have a kid hit another kid over the head with a bat. But, that's nothing. Elmer Fudd shoots Bugs Bunny in the face. And, that's for kids."

In our hour long panel discussion, Elliot and I didn't always have time to carry each answer to its full conclusion, but there was a lot to say on this topic. I'm not sure if the audience member was aware that the Looney Tunes example was made seventy years ago. Seventy years ago there was no man on the moon, Russia didn't have the bomb, and the hula hoop craze was just a gleam in some entrepreneur's eye. The world has changed in 70 years. And, along with it––the standards for what is appropriate for children to watch. The important thing is WE DON'T HAVE TO AGREE WITH IT.

A key part of the puzzle is that the Bugs Bunny shorts (and all that great golden age stuff) was made for general audiences that may or may not have included kids. Lots of adults watched those cartoons so they had to play well for a diverse audience. Second, a talking rabbit encountering a hunter is a FANTASY situation. A kid hitting another kid over the had with a bat is a real situation that can be repeated by kids anywhere, right in their own backyard. I personally believe that most kids know the difference between fantasy and reality.

But, again, my point is not that you have to AGREE that you shouldn't be allowed to have a kid hit another kid with a bat in your cartoon, but, if you you're making a cartoon pitch for TV, some executive is probably going to object to that. That's the reality. If you don't want to make the compromise, make a Webtoon and host it on your site or on youtube. The web makes a great place for your uncensored vision.

Another memorable part of the panel for me was another conversation between Elliot and an audience member. Elliot has the ability to be honest, blunt, supportive, and informative at the same time. One audience member started to describe his own pitch-in-the-making in a very apologetic manner. "They won't like it cause its pornographic and violent, etc." And, each time the would-be creator put his own work in a negative light, Elliot kept gently interrupting him by telling him, "This is a terrible way to pitch, mate. Don't point out what's shit about it." Good advice, indeed.

It was a well attended evening with questions and answers flying back and forth. We all had a blast. Thanks a bunch to Terence Gray and the New York Television festival for putting this together.
Posted by David B. Levy at 3:23 PM

I wouldn't trust a thing that Elliot guy says.

More often than not when people say "adult" cartoons they mean "juvenile". Like Spike TV's block of atrocities.

Even great "adult" shows -the usual suspects -rely heavily on schoolboy humor. Even so, these have been the absolute best comedies on television in the past two decades.

I strongly suspect that there have been very few animated series developed that rise to level of "Six Feet Under" or "Deadwood" or "The X Files" or any of the dramatic programming adults go out of their way to watch.

The process of animation can do a great job carrying the same themes and narrative structures of these shows (a lot of anime approaches).

Here's the rub -TV is a writer/producer driven medium. Animation development is done by animators and executives. The only thing holding back "adult animation" is the people trying to create it.

I'd suggest that another element holding back "adult animation" is that too many animation artists/creators believe that it's about an idea...When it is, in fact, about point of view in storytelling, a personal vision with a universal message, the ability to execute, and the ability to make and sustain the relationships required to get a break in the first place.

By obsessing over the idea as the most important element, animation artists have created a self-defeating myth that has helped hold back the natural growth of our medium.

Hi David, I agree with what you said in response! The point of view in story telling makes all the difference, it seems, even at this point.

Awesome I got quoted!!!!

Yes, Elliot is very honest, blunt, supportive, and informative but don't forget Austrailian! LOL. I absolutely loved his bad pitch comments! I also think my work is great....just not for everyone. When you get the time shoot me a message with your thoughts on the site. And thanks again, that night and your new book is terrific!

Hi Rob,
So glad you are enjoying the book. And, glad you enjoyed the evening too.

roconnor: Can I recommend a Japanese series called Paranoia Agent? In every episode a lost individual gets brought to the edge of a breakdown, only to be saved by being savagely attacked by a mysterious phantom boy with a golden bat. The mystery deepens as various characters join links between the steadily growing savagery of the attacks and 'Shonen Batto' becomes a figure of public hysteria.
Thanks for the fascinating discussion! I love the sentiments being explored and I am currently making a short with adult themes for adult audiences.

I think there is a market for an animated series whose premise & mood are more along the lines of 'The Sopranos" so long as the story & characters are engaging.

I have a collection of the 'Ghost in the Shell' TV series that I think was popular in Japan. These are definitely 'adult' in content, but they aren't comedies.

If you wanted to sell an animated series like the ones I described above, who would you go to?

Corey - try going to Japan.
They love that stuff.

Corey, Elliot's answer is correct. In short, sell where they buyers are. But, the other aspect of this is "where was the market in 1972 for a XXX animated feature staring a cat few had heard of and directed by an animator few had heard of? In other words, there was no market for that. There was no demand for it. Instead, there was the desire by Bakshi to make what he wanted to make. In short, that was an extraordinary thing to accomplish. So, if you want to be a trailblazer to make a similar wave on TV animation, you must move mountains as Bakshi did.