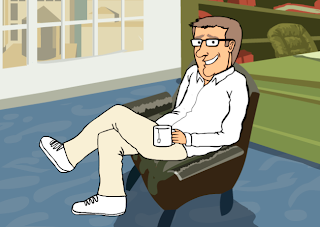 If I stacked all the TV scripts and pitch bibles I've written on the floor it would be taller than a foot stool but shorter than a dwarf giraffe. And, it would smell like chocolate. Okay, that last part makes no sense, but you get the idea. Frederator president and executive producer Fred Seibert and I don't agree on everything, but one bit of wisdom I got from him is the idea that animators have a lot of trouble writing scripts because they haven't written enough.

"How many drawings have you made in your life?" he'd ask an artist pitching him a project. "Now, how many scripts have you written?" Obviously most artists spend more time drawing than writing, accounting for the weak writing and the lack of a engaging storytelling in many pitches (many of mine included!). Fred's premise is that a typical would-be pitcher has to get a lot of bad writing out of the way before they can produce quality scripts--just like the artist has to spend many years making bad drawings as part of the his/her development.

Writing scripts for my pitch bibles has helped me develop as a writer. Like most self-development, it happened on my dime and schedule, and there was a long slog where I wasn't sure if it was getting me anywhere. But, then something interesting happened with my development deal at Disney in 2007: I became a paid TV writer! In all I turned in five short scripts for the project. Right on the heals of my Disney deal (the "House of Mouse" did not option my project beyond one year), that same executive parlayed me onto writing for another internal project. In a way that meant even more than the opportunity to write the scripts for my own deal because when it's your creation, nobody knows it better than you. So to be trusted to write for someone else on their project seemed like a major victory.

Since then, I've written paid treatments for two more properties. One was for a famous children's clothing empire, and the other was for Mr. Magoo! As a lifelong UPA fan, I considered the Magoo job a dream come true. The opportunity came after a casual cup of coffee with a producer on the series, which is being produced in France for French public television. When I turned in the treatment for the series, it was accepted without a single change, but I have to assume that the resulting series could go in a very different direction.

My latest TV writing gig concluded last week. A major kids channel, producing a few pilots to a set educational curriculum, reached out to established studios to secure pitches. One of the studios enlisted me as a part of their core creative team, and I ended up taking on the main writing duties as well as some art direction and overall project guidance. As this was speculative work for a pitch, it was six weeks of unpaid time, but I'm connected to the project should it go forward, and very proud of the creation our team turned in. Tackling the writing duties on this project felt like a culmination of all those years of scripts and pitches. Not only did all that writing time logged in help snag me this opportunity, it also gave me the confidence to write with conviction and trust my instincts.

I never took a creative writing class, so my own scripts and pitches have been my boot camp. The same opportunity is open to everyone. I know this concluding thought is beating a dead horse (particularly if you've read my other posts and books), but whatever we hope to achieve in this industry is based on the work we ourselves do. Nobody else has the power to make us anything or deny us anything... I find that this awareness also smells like chocolate.

While we all know that we can't get better at something without practice, the tricky part is that we don't usually make ourselves practice. It takes a willingness to go through a "bad writing" stage. You have to give your self permission to fail many times. Besides, learning how to handle failure is good practice too.
Posted by David B. Levy at 11:09 AM

Great post! I would also suggest hiring a writer if you someone isn't up to snuff.

I totally agree, Chris. And, I've done that once or twice. I worked with Allan Neuwirth, who is a real pro writer and a great guy.

My reluctance to do that other times was a blessing and a curse. It forced me to learn the hard way over a long period of time, but it probably held me back in the short term.

I was recently recommended by Mario's wife to read the book, "Story" by Robert McKee.

They called it the Screen writer's bible. (like animator's survival kit is our bible)

I just started reading it. It's a huge book covering a lot of script writing details, from good script to bad script.

Don't know if you got that book in your collection yet?