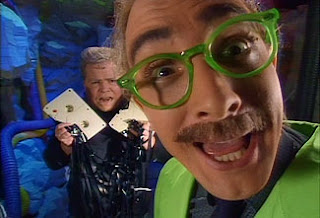 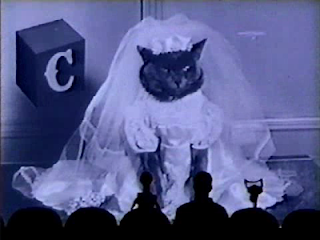 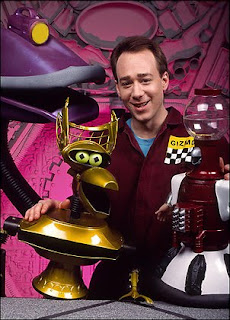 *above images from MST3K

When I first saw this Mystery Science Theatre 3000 in 1995, it had already been on air for five or so years. In 1995 I was still living at home and since we never had cable TV I had missed out on the quirky series, until my boss, Michael Sporn, asked if I wanted to apartment sit for him and watch his cat. This meant a week in neat railroad apartment in Brooklyn, just one stop away from Manhattan.

Knowing that my first evening of cable TV awaited me, Robert Marianetti, the studio's production manager, told me to watch a new episode of MST3K that night. It was one of his favorite shows. Others in the studio talked it up as well––so my anticipation was mounting. That night, I watched 10 minutes of the show before concluding that the whole thing had been a practical joke. This was the program everyone was so excited about? I honestly didn't know what to make of it. Was it a puppet show? Or a spoof on bad movies? I should have just hunkered down and gave it a chance, but there was a whole gaggle of other cable channels to check out!

Eight years later I met my future wife, Debbie, who (along with her brother) were die-hard original fans of MST3K.

As a slow adopter, it was another six years before I was completely hooked on the show. Besides its entertainment value, the show's origin story is inspirational too. First created by writer/comedian Joel Hogsdon as a public access series in Minnesota, it went to achieve cult success during its 11-year cable TV run, starting out on Comedy Central and finishing on The Sci-fi Network.

You can check out the Wiki entry on MST3K if you're curious for more information.

The genius of MST3K is that it presents bad (sometimes otherwise unwatchable) movies in a new context, throwing high-brow and low-brow riffs on what's happening and not happening on the screen. What seemed so slow paced to me at first, I see now a densely layered show with jokes that hold up and pay off on multiple viewings. The puns, one liners, and pop culture references are delivered in a more relaxed Mid-Western manner than I was used to seeing on a TV screen so dominated by NY and LA productions.

For me it's a good reminder to try to take in some new influences, to be open to experiencing something outside my tried and true favorites. A big problem in the growth of animation as a medium is that so many of today's generation of artists have tastes freeze-dried in adolescence. While there's nothing wrong with being nostalgic for The Transformers, G.I. Joe, and Star Wars, MST3K shows that you can throw jokes about Harold Pinter and Federico Fellini in alongside them.

MST3K was chock full of obscure references and inside-jokes but, as Joel Hogsdon explained (in a doc about the series), "We never ask, 'Well who's going to get this?' We know the right people will." No doubt a good mantra for all creative people to remember–– that you don't have to cater to the lowest common denominator.
Posted by David B. Levy at 6:30 AM

Someone else grew up without cable! I'm not alone :)

I definitely agree that it's essential for creators of animation to have influences outside of our medium. The most original ideas come when worlds collide.

Hi Dave. I just got done reading your new book. It was a great read and very informative. I have a couple questions that I hope you could answer for me. I am starting a two sheet to send out but my animation has about 15 characters. So should I include all of them in my two sheet seeing that it would take more than 2 sheets to define them? Secondly, I wondered who should I contact at the network or what would the persons title be to send my 2 sheet to. Thanks for your time. Great work by the way

Thanks for the kind words, and so glad to hear that you enjoyed the book.

Development Executive is usually the title of the people that take pitches at the networks.

On your question about how to handle the 15 characters in a two-sheet, think about weather all 15 are needed to understand the show. Is it truly an ensemble with 15 characters each getting equal time? Or are there a small handful of main characters that are really what the show is about? Answer that and you'll have your question answered.

Thanks for your timely response Dave. I appreciate it. The animation is kind of set up like the Justice League, but there is one character that to me is the main character so I will take your advice and just use him. Thanks again Dave I will be reading your blog every Monday.