RISD and The Slacker New Wave 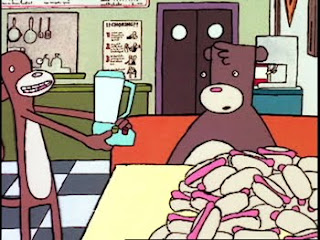 Above still from The Fran and Will Krause Cartoon Network pilot, Utica Cartoon, which is an example of how RISD's Slacker New Wave broke through to the mainstream over a ten year period to put a stamp on today's TV animation era.

Adventure Time, Regular Show, and Super Jail, all offbeat creator-driven series on current TV, on a network (CN) that had its first successes 15 years ago with a pack of very different shows, the most successful of which (Power Puff Girls and Dexter's Laboratory), followed the early 1990s wave that revived the thick-and-thin graphic style associated with UPA, by way of Cal Arts.

You might disagree with me, but my generation of animation artists that were in school in the first half of the 1990s had very little in the way of personal point of view. There were a handful of students obsessed with Disney's then-current hit streak of Little Mermaid to The Lion King. And just like any modern era, there was the usual amount of students inspired by anime. Other influences were The Simpsons, the sick and twisted world of Spike and Mike, and the underachieving graphics of MTV's Beavis and Butt-Head. But, I didn't see my generation of students (me included) pulling all of this together and doing anything with it. Sure, we might show bits and pieces of this stew of animation in our work, but we weren't serious about truly studying it and distilling it into something of our own.

But, the students (I've met) that went to school in the second half of the 90s seem to have had a far more distinct point of view, pooling together diverse influences such as The Simpsons, golden age animation know-how, Estonian animation otherworldlyness, and stripped-down (almost-Gary Larson-style) drawing skills, but with a modern post-grunge indie twist. Out of this school of animators came Fran and Will Krause, Jesse Schmal, Alan Foreman, Sean McBride, Christy Karacas, Mike Overbeck, and many more. Not only did these students have eclectic interests, more importantly, they had passion for animation and filmmaking. Their popular thesis films launched their careers and helped set animation on a new course that we are still seeing on today's Cartoon Network. It just goes to show how long these trends take to break through to the mainstream.

I like to call this The Slacker New Wave, because these filmmakers have such laid back personalities that showed through in their art. They mixed casual and quiet pacing with random and spontaneous stream of consciencenous ideas. Nobody could mistake Pen Ward's 2005 pilot for Adventure Time for what it was: a breakthrough in current animation development. But that was more a breakthrough in terms of development executives finally recognizing the next trend. Not to take anything away from Ward's achievement, but the style and point of view that he utilized had already been around and winning film festival prizes around the world for ten years. Ward carried it to the next step.

I think the hardest thing is to take in 100 years of animation, film, art, writing, music, and literature and put your stamp on it, and create something new from the air we all breathe. I think, the new trend of TV animation as evidenced by Adventure Time, Regular Show, and Super Jail (and others) was something that began in the mid to late 90s, possibly from one single school!

While there's hundreds of animated films being made every year, made in a myriad of styles, very few of them actually end up influencing the direction of what comes to define the next era in cartoons (of course, nor do they need to, but that's besides the point). Of those names listed above, only Sean McBride wasn't a RISD grad. Could it be that this school largely known for it's individual and non commercial approach has had the biggest influence on commercial animated product in recent years? The amazing trick is that the RISD films also stand alone as strong personal works of art. Note that the RISD student reel has won top honors (or at least runner up status) at the last three Ottawa festivals in a row. Kudos to RISD animation head Amy Kravitz and her teaching staff!

One thing is for certain, RISD organizes its thesis students differently than the four animation schools in New York City. While the big apple schools favor a system with students working as individuals reporting to a single advisor, RISD has thesis students report to each other as a class in weekly open critiques. The results of the RISD system speak for themselves. Now if I can only figure out what it means that Seth MacFarlane also came out of RISD in the mid 90s.
Posted by David B. Levy at 8:35 AM

Will Krause didn't go to RISD, if I recall correctly, but the point is taken.

The success of these artists is, in part, cyclical.

The hard-line, neo-retro advocated by CalArts was bound to have a counter trend. The Krause-style (when I see Adventuretime and similar films, it like a xerox to me) is a perfect antidote to cool precision the early 90s styles.

That 90s style is still fairly prominent in production. It was also boosted by being a simpler thing to reproduce in Flash.

I agree that RISD does a great job of producing diverse students and nurturing their talents as artists.

University of Arts (McBride's alma mater) does this too, though I'd rank their output a grade or two below.

as we say at the hockey games: "Go Nads!"

Yeah, that will definitely throw a wrench into your theory, Dave! :)

I think RISD produces some fine talent, to be sure. They are certainly doing something right up there!

Always dug the vibe and aesthetic often associated with that school and the people coming out of that school... But, I do know enough people who have passed through those halls to say that there IS quite a bit of stylistic diversity that came and that still comes out of that school. Also, diversity in content, etc.

Plus, I hafta say, on the whole it always looked to me like they REALLY teach people how to ANIMATE up there... Can't say that for a ton of schools in the US.

I'd still rank RISD in the top 5 for US schools with an animation curriculum, definitely.

... Is that totally getting off the subject?
-haha

In any event, BIG fan of this wave of animators/ animation artists!

I think I should forward this to Amy (and I am doing it...right now)

ROC,
Good catch on Will Krause not having gone to RISD. I do consider him "of the RISD school" in terms of his animation. And, he was a part of that scene, working on Fran's films and collaborating with the other students, even though he wasn't a student there.

Also, for more on how the RISD animation program works, seek out the Dec 2010 issue of Animation Magazine, which features an article spotlighting the school, Amy Kravitz, and the recent graduating class. Good stuff!

I believe the RISD people are made to take drawing classes along with their animation classes. This isn't true of NYU or even SVA, that I know of. It makes a difference. (By the way, I may be wrong about this. If I am, please let me know.)

Good point, Michael. I'm not positive on NYU, but at SVA, there are foundation classes that require various drawing classes of the animators––life drawing and anatomy are among them.

In terms of drawing teachers....At RISD we end up getting an eclectic range of drawing teachers during our first year. In the end, you could end up having a more "traditional" instructor or even a more "experimental" one; it ends up being "chance" who you end up with...

I have mulled over this for a day now, and I realized that I should have mentioned Bryan Papciak at Handcranked Productions.(silly me for not rembering earlier) My two years with Amy was further enriched with him; he was the complementary partner (especially in times of confusion) who I would also never forget.

Yeah for Amy AND Bryan!

The RISD FAV program does not offer drawing or sketching courses within our animation program. The skilled draftsmen in our department tend to feed their drawing needs on their own time or by taking their out-of-major requirements in the illustration department. That was the common trend from what I saw with the 2D animators in our program. Others would maybe take sculpture, painting, digital media, or even design courses depending on the type of animation path they were aiming for. Or just to have fun and learn something new.

And I will also mention there were many students in our department who chose just live action, or did a double focus on both live action and animation.

In addition to that, our freshman year is dedicated to developing a foundation of skills. We are required to take two semesters of drawing, 2D Design, and 3D design.

Animators studying "live action" is, I think, essential if they are interested in being film makers.
You'll learn more about cutting there than you will in any animation course.