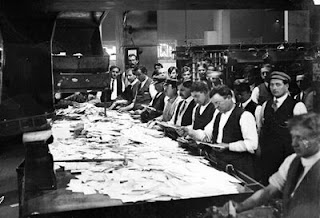 I should get my computer back early this week, so my apologies for another week's delay in the posting of part II of the Rob Renzetti interview. For this post I cooked up something else.

When animation graduates first embark on their careers, many of them don't have much (or any) animation work experience to list on their resumes. I had a small handful of animation freelance jobs when I completed my degree at SVA, but, the majority of my work history was in non-animation related industries. As an employer myself, these days, I see any work history as being a major plus. You can learn so much working at any job, whether it's folding clothes, standing at a cash register, taking tickets at a movie theater, etc. The people that never had any working experience are the people I'd be adverse to hiring. Without a work history, there would be no proof that someone could hold down a job and understand what it means to be responsible for delivering a service (on deadline) for pay. And, without a work history, there would be no references for an employer to follow up on.

I also appreciate the lessons I learned by working outside the animation industry. People skills translate across all businesses, so I'm especially grateful that I had a lot of varied experiences that taught me all kinds of things. Here's a short round up of what I'm talking about:

Phone Soliciting
For 6 months I worked for a chimney cleaning company who's main method of landing new business was through cold calls to the unsuspecting public. The hourly wage was minimal, but the real money was to made in sales-based bonuses. All new employees were given a 10 day grace period to get the hang of salesmanship, but if they had no sales after that, they were let go. I had zero sales for my first 9 days, and as I started the final day my boss reminded me what was at stake. But, instead of getting increasingly nervous, for some reason, I got calm. Working the phones in a relaxed state for the first time in two weeks I must have projected something different because that day I made five sales. The company average for a decent salesperson was 3 sales a day, so my boss was pretty shocked at my recovery.

The lessons learned? Calm is better than a state of panic, and you have to get comfortable with yourself before you could become a convincing salesperson.

Data Entry
My dad's college buddy had a small Ad Agency which he launched with an account executive partner. On the side, to help pay the bills, they provided data entry services for a client that held a sweepstake. For a small hourly wage they had someone entering customer contest data on a spare computer. Before they hired me, they had a parade of untrustworthy people who stole from them before getting fired. Plus they were all slow as molasses at entering the data. I was fast at my job and trustworthy enough to also handle company bank deposits as a side duty. After four months of working for them for two days a week, I decided to ask for a raise.

The response? "You'd have to go even faster to earn a raise."

Knowing I was their fastest employee already, that sounded silly to me.

I asked, "But, what about the additional things I do around here, such as the bank deposits?"

That didn't sway their opinion either, and they simply stopped asking me to do the bank deposits after that. I finished the job, logging in two more months before there was no more data to enter.

The lesson learned? The most likely raises are the ones you don't have to ask for. Since then most of the raises I've had in animation were when I was promoted, which is a production's way of giving a reward for hard work and acknowledging an increase in responsibility. In contrast, the data entry job already paid me to the point they were comfortable paying, regardless of how fast or trusted I was. Still, it felt good asking. It doesn't hurt to ask if you have a case to be made.

Publisher's Clearing House
By my junior and senior years at school, homework kept me so busy that I only worked part time jobs in the winter and summer breaks. Publisher's Clearing House had a large operation to sort mail (sweep stakes and subscription services) not too far from where I lived on Long Island, and since they liked hiring people for work periods as short as four weeks, it was a good fit all round. The only hiccup happened when a silly payroll mistake (on their end) resulted in my second, and third checks not being issued. Not only did they not pay me two weeks in a row, they seemed very cavalier about fixing it. So, I after I complained to every manager in the place, I told them that they could find me in the cafeteria reading a book on company time. After about two hours, someone managed to draft up a check, and I returned to work.

The lesson learned? When the powers that be don't pay you and don't seem to care, get creative in return. Now, as a producer/virtual studio operator, sometimes the missing money effects not only me, but my crew. Thank goodness I don't usually experience such issues, but twice in the last two years I had to speak up about payment interruptions. While you don't want to risk hurting the relationships that get you work, getting paid in a reasonable amount of time is part of the exchange of work for pay. That said, I try to be reasonable in my response even when dealing with the worst case scenario. "Try" is the key word.
Posted by David B. Levy at 11:33 AM

So are you now forever ineligible to win the Publishers' Clearinghouse Sweepstakes due to your summer employment? That's a tough break.

A worthwhile person picks up "life lessons" from just about every experience, jobs included.

Non-film/art jobs are more interesting to me when looking for a staff employee. For a project based artist, it's less important. Of course, project based hires generally have a longer track record of industry work.

So I guess I'm pretty much adding an opinion of agreement. Someone who worked their way through school or their summers is definitely more appealing than someone with equal or slightly greater talent who doesn't have that record.

"Calm is better than a state of panic, and you have to get comfortable with yourself before you could become a convincing salesperson." ... both very true. That first part (calm is better) can be hard to remember under the pressure of deadlines, creative push and pull, and the various personalities you have to deal with, but it's the best state to be in no matter what.