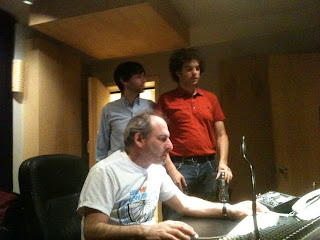 Standing are my co-creators, Stephen Levinson and Joel Moss Levinson, with Peter Levin at the controls, as we record an actor at NYC's Splash Studios. Photo taken by me.

How many Levites does it take to create a self-funded and self-produced animated pilot? It turns out, the answer is three. In the summer of 2010 I was on a animation development panel for the NYTVF and sitting in the audience was a very alert Stephen Levinson. A comedy writer working by day on Comedy Central's Website, Stephen had been producing animated cartoons (with his brother Joel) for a Jewish online magazine called Tablet.

After the panel, Stephen got in touch with me to show me a pilot he and his brother had created for pitching purposes. Featuring the voice talent of comedian Jonathan Katz along with the brothers sharp writing, I thought the project was terrific. But, while the brothers were in the process of pitching it around, they began to get antsy to develop another project. Over Skype (Joel lives in Los Angeles) we brainstormed a raw idea and very quickly started to see its potential. There and then we agreed to work together to not just develop this germ into a pitch, but to focus our energies on making our own pilot film.

Making a film as pitching tool is a double edged sword. On the negative column it's sometimes better to let execs imagine how great your project can be instead of showing something tangible that doesn't live up to the expectation. Additionally, it takes a ton of time and effort to make a finished film, so going down this path ensures you won't quickly get to market. But, on the plus side, in this day of viral video, a film can be posted online and grow its own fan base. To put it in other words, nobody is logging on to the internet to read pitch bibles. A pitch bible is not alive. Films are. A pitch bible tries to hint at execution, while a film is execution. Not only that, a hot viral video proves itself in "hit" counts, something that can be a valuable asset to generate interest with a network. Lastly, making a film is simply fun, exciting, and satisfying. Not only will our film by alive, it will exist in three ways: a pitch tool at meetings, a viral video, and a festival film (probably only in children's film festivals or specific categories, but nonetheless).

We started our pilot in ernest on December 2010. Stephen did the lion's share of the script writing, Joel (a gifted singer/songwriter) wrote 3 original songs and provided sound design, and I designed the characters and their world. But, while we each had a clear role, we all had a say in improving each other's work. Once we had a lock on the script, voice records began on both coasts. Among our stellar cast are two terrific and well-known comedians from TV and movies, both of whom worked for spec. After ironing out all the character designs, I enlisted the animation veteran Otis Brayboy to make story sketches from which it would make my job easier to create a storyboard/animatic. My friend and frequent collaborator, Adrian Urquidez, painted all the backgrounds.

Our 8-minute film was animated by three of my favorite animators: Dale Clowdis, Mike Sanchez, and Dayna Gonzalez. As the animation director, I didn't do the animation myself, but I did the next best thing by designing all the puppeted pieces to make up each character rotation. While we're employing puppeted-style animation, all the art was drawn by hand, giving it a lot more warmth and looseness than a typical "Flash-based" children's show. The animators did a terrific job, going well beyond our expectations.

Less than a year after starting from scratch, we're now a week away from finishing the animation! We can't wait to take it on the road and post it online. Between the three of us we have a lot of network connections and we aim to work just as hard to sell our series as we did to make this film. Stephen, Joel, and I each brought our A-game, and I believe we brought it out in each other. It was the perfect collaboration because each of us had a key area of expertise, helping to define our respective roles. That's a good way to choose partners. Each should bring a major element to the table that the other is lacking.

The world of pitching can truly suck (for lack of a better word). Anyone who has a pitched a project even one time knows what I mean. But, the magic part is that through your efforts you're giving yourself permission to develop your talents, create freely, and earn your seat at the table. Ironically, the negative side to pitching is also a positive, in how it tests your passion, commitment, and skill sets.

Stay tuned for the final product, coming soon!
Posted by David B. Levy at 9:46 AM

Love that you all are self-producing a pilot. "Show, don't Tell" is such a powerful rule that sometimes we forget it applies to not just filmmaking but pitching series as well.

"Don't tell me about how great your project will be, show me how great it is."

I can't wait to see the finished pilot. Good luck to y'all. :)

You nailed it exactly. "Showing" is the way to go. Of course by no means does any strategy ensure success. But, I know what I'm doing a great deal more than when I last tried this route almost ten years ago, and my co-creators and collaborators are top notch. Looking forward to sharing with you!

It's been kind of fun secreting away time on this project over the last year (during evenings and weekends), but, now we're all getting antsy to share it...

Congrats to you and the team!

The act of pitching is way overrated. It has been done into the ground during the past decade or so. Showing what you bring is the way to go.

I think I know what you mean, anonymous. I think people do make too much on the "art of pitching." My best successes have been when I've emailed a pitch and just let it speak for itself.