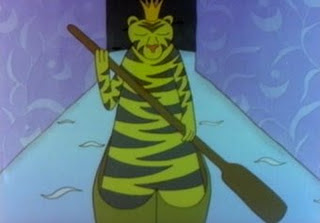 Above image from Signe Baumane's film, "The Gold of the Tigers."

Last week I presented part I of my interview with indie animator/director Signe Baumane. Today I'm pleased to share the 2nd and final installment in which Signe explains what sets indie animation apart from commercial animation, the difficulty she's had directing animators, and the painful (yet educational) act of sharing your work with an audience.

Notice how she honestly critiques her work in the answers below. I think that's an important thing to be able to do if one wants to grow as an artist. Not that one should act as their own reviewer, but not being satisfied with one's previous works, and understanding why, allows the artist to push forward and keep creating/exploring.

1-What part of directing animation gives you the most satisfaction?
Nothing, really, It is a lot of hard work, and I have no patience to see how drop by drop the bathtub gets full. I am not cut out for working in animation. I hate to work, but in animation all you get is work, work, work. Ironically, I am always in a rush to finish a film, because I want it finished yesterday, but once it's done, I immediately start a new film. Why? I think I should get my head examined.

Ok, there is one part of the process that makes it worthwhile––the excitement of conceiving the idea, having hopes that this is going to be the best project ever, living with my vision for months and months. Or years. But, inevitably, when it's done, it is a disappointment. It never is the best film ever. Maybe I work too fast? Maybe I don't invest enough time in thinking through minuscule details? But I can't. Working on something for too long kills me.

2-What methods have been the most effective in giving notes and feedback to your animators (assuming you do this)? And, what has not worked so well, and why?
I am not very good with working with animators. When I give them the task, we act the scene out, we play with it, have a great time and then the animator goes to work and when she comes back there is nothing left of what we acted out. The animators that I worked with always try to do some short cuts, give themselves slack and I dont know how to push them to work harder.

There were about 4 occasions in my experience of work with animators when an animator truly gave me her best. It was like flying, like sex. We experienced great unity, intimacy and feeling of conspiracy. Those were the cases when animators wanted to prove something, to me or to themselves or to a producer. Mainly, the animators I worked with, regard me either as a cash machine (they want me to accept the scene so that they get paid) or their adversary (because at times they don't believe in my vision and think my ideas suck). Then I feel very lonely, deserted, and can only trust that my concept will carry the story and I edit the shit out of the mediocre footage I got. Meaning, editing and timing the scenes is also part of the work of a director. Am I too hard on my animators? : )

It's all probably my fault...

3-Where did you learn your sense of timing, acting, staging, and storytelling that is so essential in directing animation?
I definitely was not born with it. I was very sloppy with timing, and ignorant, too. The day I watched my first film "The Witch and the Cow" with an audience, I was in pain, what a horrible film, what a torture to sit through those 2 minutes 40 seconds!

I decided to be better with my next film, but "Tiny Shoes" was too fast at times, too loaded with imagery for audience to understand everything I was trying to say. The next film "The Gold of the Tigers" was a directorial disaster, although I am still fond of the story. In short, constantly making a new film and watching it with an audience has been a great education for me.

But please note, I havent made a perfect film yet. It's surprising, because some people get it with their first film, but not me.
I have made about 14 or more short films and still am guessing how to do this right. 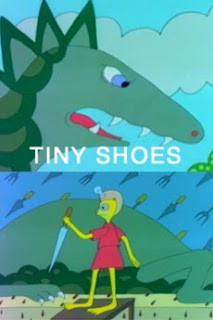 4- What has watching your films play to audience taught you, that you would not have discovered otherwise?
An audience can teach you a LOT. It's intuitive, visceral knowledge/learning that I can't quite describe.

It's not the laughs am going for, it's a reaction, "Veterinarian" sometimes got a very emotional reaction from an audience,
at times––indifferent, and at times––bored, restless. Even with such a different reaction I can see where I failed to communicate the emotion, the message, and where I've succeeded. The mistake that some of us, indie animators make, is
that we think if audience doesnt laugh they are bored. So, just like standup comedians, we work for laughs every 10 seconds
in fear of boring the audience.

But a laugh is only one kind of reaction and if you make them laugh every 10 seconds you might forget about building a character, making your story more meaningful, connecting with your audience in a different way. Not making them laugh every 10 seconds is taking a risk. With "Veterinarian" and "Birth" I took that risk, and YES it's painful for me to sit though those films with an audience, because I am never sure how they are going to react, they get very quiet sometimes and I am not sure if it is a good quiet or bad bored quiet. But each time I sit with the audience, I learn so much about filmmaking, my own filmmaking,
that I could never learn anywhere else. Education is painful.

The audience rules. Unlike some filmmakers who claim that the audience doesn't matter to them, I make films to connect with people (imagine you are telling a good story or a joke in an empty room, what's the purpose of that?). 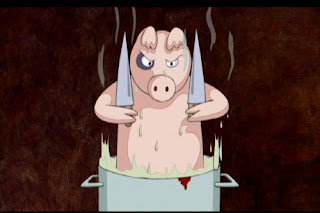 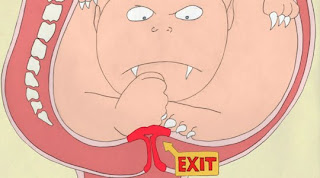 Above images from "Birth," and "Veterinarian."

5-What advice do you have for someone just starting out in animation with ambitions to make their own indie animated films?
Low overhead is the key for a successful career as an independent artist, be that an animator or a painter. People who buy cars or houses or have demanding girlfriends (they demand diamonds, you know) or have expensive habits (like heroin, fancy restaurants, etc.) have a hard time staying independent. Be modest with your budget. On the other hand, dont be modest about your ambition, goals and dreams. Dream BIG. But preserve your resources.

6- What is your secret to sticking with an indie film through to completion?
Passion. The story I want to tell. Ambition. The need to have a project. The irritation of something hanging around not finished.
DRIVE.

It is a kind of character I have. I see that other people have other kinds of character and they dont have a burning need to finish anything. It's not good or bad. It's just the way we are.

7-What indie animation blogs do you visit most often and why?
I don't, really. Cartoon Brew probably is the most visited site by me and that's once in 4 months. ASIFA-East site and blogs - once in 5 months. AWN - once in 6 months. I am just too busy, juggling work for money, sending my films to festivals, trying to work on my next project, seeing work of other people, replying to emails, staying informed about animation, politics, keeping up with my personal life and friends, I have to shower sometimes and eat, too.

I dont have time for Facebook, Twitter or other excitements, I am basically overwhelmed the moment I wake up and open my emails.

8-How do you develop an original voice as an indie animation director in a world where your influences are all around you?
I think, one must have to have bad memory. My memory is so bad, I cant remember anything, so when I create something, it's coming from inside of me rather than from something I've seen. I also never studied animation nor art, so I dont know how to do things correctly, by the book. That is a HUGE help in staying original.

Another thing -develop yourself as a person, find out who you really are and what interests you. That involves reading a lot of books (on philosophy and politics), and thinking about things that are around you, form an opinion about anything you see or observe. Originality comes from inside, it cant be taught in school, it takes developing yourself, working on your Eternal Soul.

9- What is it about the properties of animation that are unique to this medium and how should those be utilized when making an indie animated film?
Animation is a very condensed medium, you can tell a story in 1 minute that in live action would take an hour. Animation is a perfect medium for expressing abstract ideas, to play with meaning of words, cultural references, and many other things. Animation doesnt require a language (dialogue, voiceover) to communicate an idea or a story.

The way that TV or feature animation uses animation as a medium is a little bit realistic and dialogue driven. Indie animation, on the other hand, if it doesnt try to imitate TV or features, tends to use animation for what it is best at - expressing one's soul, unique artistic vision, abstract ideas, and pure fun of doing things that are not possible in live action.
Posted by David B. Levy at 6:41 AM

Great interview. It wasn't the questions so much as the unexpected responses. It's nice to see someone so fresh and original.

I agree. Signe went well beyond the basic questions. Really interesting answers, so much food for thought. Glad you enjoyed, Michael!