He Played it by Ear 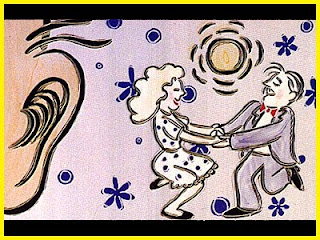 A still from "The Ballad of Archie Foley - he played it by ear," a 1995 film co-directed by Candy Kugel & Vincent Cafarelli.

I was very sorry to hear that Buzzco Associates, inc. co-founder Vincent Cafarelli died last week. Vinnie was one of those people that you assume will always be around. Passing away at the age of 81, his career spanned from the days of the theatrical short (Famous Studios) through the golden age of NY animated commercials in the 1950s and 60s, and concluding in the present era's botique studio of the Hubley's model.

I met Vinnie so many times over the years, going back to when I first attended an ASIFA-East board meeting at Buzzco in 1995. Vinnie didn't stick around for the meetings, but as he was heading out the door we always exchanged a few pleasant words. I was aware of his talent and reputation and I admired his warm and gentle disposition. In 1996 when I was on a layoff from Michael Sporn's studio, I officially interviewed at Buzzco where Vinnie and his studio partner, the friendly Candy Kugel, sat me down to check out my work. At the end of the interview, I asked if I could stick around to watch all their films, which they had compiled on a single video tape.

I had already seen at least two of their films at ASIFA festivals, but this was the first chance I had to see the full body of their work. I was blown away by the variety and quality of the shorts. I particularly loved the films "A Warm Reception in L.A." and "We Love It," both of which were tongue-in-cheek looks at what it's like being an artist working in a commercial field.

After the meeting, they invited me to stay for lunch and eat with their crew. For someone newish to the industry who was currently out of work, sitting down to a meal with the Buzzco family made me feel a little more hopeful, and a little less lonely before returning to my apartment to face the rest of my layoff. That was the shop that Vinnie and Candy built. A family atmosphere that happened to be professional animation folks churning out award-winning indie films and top-notch commercial assignments.

I had the pleasure of seeing Vinnie only two weeks ago at an Academy screening, where we chatted about Brooklyn. Vinnie lived in Cobble Hill near my wife's Aunt. I told Vinnie I was living in Brooklyn too and that my dad was from Brownsville and my mother from Canarsie. Vinnie said to Candy, who standing near by, "We have another Brooklyn boy here."

After I heard the news of Vinnie's passing, I kept thinking about Buzzco's 1995 film, "The Ballad of Archie Foley," which depicts the life of a gentle man who spent his days in the entertainment biz, albeit in the largely uncelebrated role of foley sound recording. How apt a metaphor for animation people who similarly toil behind the scenes in anonymity. Still, I think the majority of us wouldn't have it any other way. We speak through our drawings and our films, and through the people left behind that absorb that work and it's lessons.

Vincent Cafarelli has left behind a rich legacy and we are richer for having had him a part of NY Animation all these years. For a more detailed account of Vinnie's career be sure to visit Michael Sporn's post. My thoughts are with Vinnie's family, Buzzco's extended family, and with his partners' Candy Kugel and Marilyn Kraemer.
Posted by David B. Levy at 2:55 PM