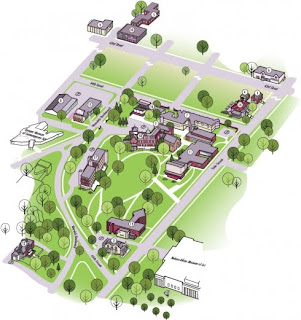 This past Thursday/Friday I was invited to speak at the Kansas City Art Institute by it's affable animation chair Doug Hudson. Doug, who has an MFA degree in Experimental Animation at Cal Arts where he was mentored by the late great Jules Engel, is also a multimedia artist and musician. He established the Student Academy Award-winning animation department for the Kansas City Art Institute in 2004. Past guest lecturers to the KCAI animation program have included John Canemaker, Suzan Pitt, Joanna Priestley, and Phil Mulloy.

Upon arrival to the school, Doug took me out to dinner with two of his esteemed faculty: John Baker (Digital Media and Animation teacher) and Christoph Steger (assistant professor and documentary animation filmmaker). Besides comparing notes as fellow animation instructors, the friendly bunch filled me with tales of local history, such as the plethora of underground railroad tunnels dug before the Civil War. 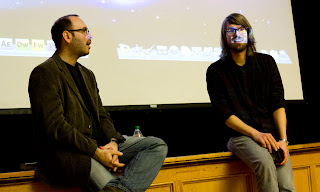 Pre-lecture I enjoyed a relaxing chat with Christoph Steger (pictured right), where he told me he recently worked on an hour-long animated documentary made in the UK. (photo by John Baker).

My Thursday night lecture was a two-hour version of my SVA career class. My spiel is based on 14 key lessons I've learned from my time in the industry. Each lesson feels as personal to me as the films I've been making as of late. When I'm reliving each story in front of the students it feels like one part confession, one part motivational speech and one part the ravings of an animation Rabbi. What all that adds up to I have no idea, but I think everyone had a good time. 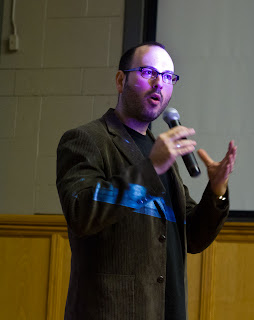 Captured in the moment by John Baker, surely reliving some industry trauma or hard-lesson learned.

The second day was a more informal chat with Doug's nine-member senior class. Knee-deep into their thesis films, some of them got up and presented animation tests, snippets of music or sound, and color studies from their works in process. The KCIA animation thesis track reminded me of RISD in the blend of experimental and narrative films on display. In addition, some students were working on projects that were part gallery installations.

After a lunch consisting of the greatest Rueben Sandwich in recorded history (great recommendation, Doug!!), I spent the rest of the afternoon having one-on-one chats with the students as they labored in a large studio space that would make cramped NYC animation students green with envy.

There are a lot of talented students in this program, and their passion to make it in this industry was undeniable. But, there was also a lot of humbleness in the air. Is that a Midwestern thing? Whatever the reason, it was refreshing to see.

The students had an acute awareness that upon graduation they needed to move to either NYC or LA. While it's true that animation artists can live anywhere today, it's important to first spend some amount of years working in an industry hub city, building up a reputation, and making contacts. After that, working from home (from anywhere) becomes a viable option. I can see some graduates of this program going out into the world and bringing those skills back to Kansas City and growing the local industry. Until then, as the students venture into this art/craft/business, I hope that they could somehow hold onto their wonderment of animation, their unassuming natures, and their obvious affection and support for each other.
Posted by David B. Levy at 8:44 AM

Your visit as well as your books left a great impression on my son, who is one of the 9 seniors in the animation dept. He appreciated the real life stories and how to get started in the industry.

It was my pleasure! A great animation program and a great bunch of students.

Dave, that looks like a great campus! Sometimes I forget that there are a number of amazing schools around the country with 'art institute' in their names that date back to before the 'art institutes international' appeared.
It's interesting that Disney started out there, I think even taking classes at the KCAI but then had to move out to LA and a century later, these students have to do the same thing. I wonder if the changing nature of the medium and the movie industry will ever allow a place like Kansas city to become an animation hub.

Sounds like we may be seeing some of these guys and gals in NYC. :)

The animation program out there sounds like a really good one.

Really nice to hear promising things from schools that are a little more 'below the radar' than the wonderful programs at Ringling, Cal-Arts, NYU and RISD.