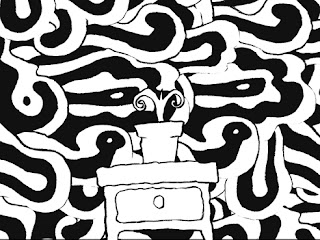 One sign of the poor quality of animation critique is the lack of serious writing about the animated films of the most renowned independent filmmaker in the world, Bill Plympton. Yet, I have mixed feelings about writing about Bill Plympton when there are so many unsung animation filmmakers in the New York Area. However, one of the benefits of having a weekly blog is that with each Monday entry, there’s more than enough love to go around. Outside of the obvious quality and quantity of Bill’s work, there is also his generosity of spirit beckoning me to feature him in today’s entry. Bill has carved a very visible role in the New York area community and is a regular presence at ASIFA-East screenings and events. Bill has championed other films and filmmakers and I don’t think he gets enough credit for it.

I first became aware of Bill Plympton’s work while I was still in high school. I remember traveling in from Long Island to see Bill’s animation as part of an animation tourney that played at a (now) long-gone Bleeker Street Cinema. There I saw Bill’s seminal works such as “One of Those Days” (1988), and “How to Kiss” (1989). As an amazing illustrator working in animation, Bill’s films were living and breathing with the artist’s hand present in every frame. For someone who came to animation fairly late in his career, Bill emerged as a fully formed idiosyncratic filmmaker. His films quickly found festival success, TV play, and even an Oscar nomination for 1987’s “Your Face.” Animation enthusiasts all over the world very quickly became familiar with Bill’s blend of black out gags, adult themes/humor, colored pencil technique, deft draftsmanship, and a tendency to time animation on 4s, 6s, and 8s.

In my opinion, Bill hit a recent creative peak in 2004 and 2005 with a pair of very different films. “Guard Dog” was Bill’s most sophisticated use of animated cinematography since “One of Those Days.” The titular character bounced through the film in walk cycle so stylized that it was virtually made up of only key poses. Most action in the film is depicted in the same fashion. A martial arts sequence preformed by an animal in a tree, pops from pose to pose in much of the same way. Bill’s choice is not an animated short cut. He’s displaying the confidence of a master. The result was nothing short of thrilling and hilarious. There are also terrific jump cuts in the dog’s journey through the park that emphasize the growing mania and impending danger. With “Guard Dog,” Bill came dangerously close to animating a character as a character and not as a comic prop. We see the guard dog react to its surroundings and later to the consequence of it’s actions. The short’s subject of an overly protective canine, ready to protect it’s master at any cost, is a one note joke, but a perfect one to explore over a short film.

Bill followed this short with the excellent “The Fan and the Flower,” a poetic love story between the title characters. The film is elegant in it’s use of silhouettes and sparse scenics. I preferred the first version of the film with its original narrator before Bill swapped that out for the Oscar-bate voice of Paul Giamatti. Perhaps because the film was written and produced by Dan O’Shannon, Bill had to stay faithful to the story and put a limit to the creative indulgences that mark some of his other work. I find that rules can force creative people out of their comfort zone. Wasn’t John K’s original Nickelodeon version of Ren and Stimpy so much more fun when it flirted on the edge of good taste instead of clubbing you over the head in its later Adult Party incarnation on Spike TV? In such a way, I’m a believer that Bill’s best work is not found in his (anything goes) “Sex and Violence” series of shorts. Bill’s most recent short, “Shuteye Hotel” showed that Bill might be in agreement. It’s a beautiful looking film, with lots of great murder mystery noir touches.

For someone primarily thought of as an indendepent animator, Bill has made many TV commercials over the years as well as a handful of TV pilots. I don’t think the TV pilots (to date) have captured the best of Bill’s work the way his shorts so often do. For Bill’s best TV work to come through it may take collaboration, which is the lifeblood of all good TV pilots and series. I suspect that the networks that gave Bill pilot deals largely tried to stay out of his way in attempts to imitate the creative freedom that power his best shorts. I don’t think either party benefited by such a plan.

Short films remain Bill’s bread and butter. The problem is that Bill has been so prolific and successful with his shorts that its an area where few challenges remain. Bill is currently putting the finishing touches on his fifth feature film and its tempting to speculate that he continues to make shorts if only to pay for his experiments in features. In features, the stakes are higher. They take longer to make, are more expensive, and have far greater demands in the writing department. The juice that powers a great film like “Guard Dog,” doesn’t cut it for a longer format. With features, Bill enjoys the challenge that he may have felt long ago when he tackled shorts for the first time. Bill’s quest to make a great feature film has allowed this most celebrated of animators to stay hungry.
Posted by David B. Levy at 5:51 AM

Great write up on Plympton.

He truly does have his own unique place in animation history. I am suprised that HAIR HIGH didn't do too much on the independent circuit (or any circuit for that matter). I thought it had some of his best work, and for a feature, was quite accessible.

I have had (and still have) Bill Plympton pegged as an illustrator who animates, as opposed to a pure animator or filmmaker who animates. However, his recent work has shown him to be making more filmmaker based decisions, which is giving some freshness to his current work.