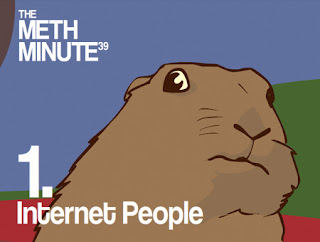 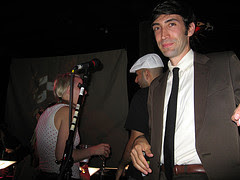 Many creators owe their start in the biz to Mr. Fred Seibert who has spawned oodles of opportunities for pitchers through his initiatives at Cartoon Network/Hanna Barbera (What-A-Cartoon!) and Frederator (Oh-Yeah! Cartoons and Random Cartoons). Dan Meth arrived on the scene in 1999 and gradually made a name for himself through his internet cartoons. Fred hired Dan Meth in March of 2006, and they both began to search for ways to work with one another on original content. Eventually they came up a groundbreaking idea; the creation of 39 shorts called The Meth Minute, conceived and directed by Meth, to be posted consecutively over 39 weeks.

They unveiled their series with a certified phenomenon called, Internet People. It was a very shrewd beginning for the series because it basically summed up the history of pop culture as spread on the internet while at the same time placing the Meth Minute within that context. The short got millions of hits and lots of attention on various media. As a film, Internet People owes a lot of its success to Meth’s catchy little song and lyrics. Animating to a song lends an advantage to a filmmaker because it provides a tight little structure on which to base a film around. I wondered if all of Meth’s shorts would be musical and I looked forward to finding out.

The next Meth Minute film, Sex Machine, was a James Brown spoof and, in part, also utilized a song as a key component. With this second film I understood was Meth was trying to do. The Meth Minute strives to be the internet equivalent of SNL’s cartoons by Robert Smigel. The strength and weaknesses of Meth’s films will be determined, not by his skill (he’s consistently a technically capable and confident filmmaker), but by how well he chooses his pop culture targets and how often his writing is able to carry it beyond an inspired title.

For example, the latest Meth Minute is called, Mike Tyson’s Brunch Out. Anyone of my generation (I’m a couple of years older than Meth) will immediately recognize the pun on the popular 1980s video game, Mike Tyson’s Punch-Out! I think Meth tried to create a deliberately disjointed short that gives one the feeling of picking up a little bit of conversation from each table at a busy restaurant. So, on one hand, the film makes a point about brunchers who are lost in their own worlds, while on the other hand, it’s simply illustrating the joke: here’s Mike Tyson placed out of context, eating brunch and spouting out Tysonisms on demand. For my taste, the dueling concepts compete with each other, and sap strength out of the whole. It’s interesting to see how many ideas a short film can or can't hold and that’s part of the adventure of this whole enterprise. Over 39 films, they’ll win some and lose some.. and that seems about right.

The Meth Minute is a bold experiment and it’s well worth all of our support and encouragement. Besides, this is a NY production. Show some love! Check out the Meth Minute at www.frederator.com and www.channelfrederator.com.
Posted by David B. Levy at 6:39 PM

Thanks for the kind shout out Dave.