Time to make your appointment to see Dr. Katz 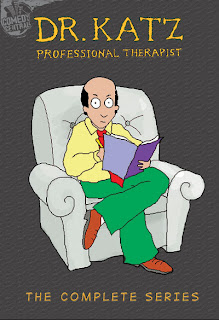 Is it just me, or is Dr. Katz one of the most brilliant TV shows in recent times? I think the case for this quirky show is pretty simple. Beavis and Butthead succeeded in part because it combined memorable characters segments with economic repurposing of old and current music videos. Dr. Katz did the same thing with well worn stand up routines from a veritable who’s who of top comedians. In the guise of “therapy” the comics would run through their material which were then depicted in producer Tom Snyder’s patented squiggle vision. Book ending the comedy bits were brilliantly written story segments with a lean cast of characters: Dr. Katz, his deadbeat son, Ben, the surly secretary, Laura, and two of Dr. Katz’s pals at the local watering hole. Dr. Katz plays as a sort of animated companion to Seinfeld, finding character gold by exploring and reveling in moments of “nothing.”

Not since J.Ward’s Adventures of Rocky and Bullwinkle, has there been an animated series that did so much with so little. Dr. Katz is deceptively simple however. Sure, there is little to no actual on-screen movement. No walk cycles, matches on action, or even transitions from pose to pose. On Dr. Katz, all of that happens between the scenes or cuts. It’s an implied movement. The scene layouts, held poses/expressions, and editing are so strong, that it all works! The show fascinates me because it puts such an additional burden on the editing where even changes in expression can only really happen on scene cuts. I can’t think of any other TV show or movie where this is the case (besides other productions by the Dr. Katz crew, of course).

I’ve always felt that TV’s bad reputation for animation was unjustified. TV allowed a breath of fresh air to arrive in the form of the art of the soundtrack. Sure, soundtracks in the theatrical cartoon could be incredibly inventive and sensitive, but for television, soundtracks had to do even more of the heavy lifting. This was artistic necessity, as well as an economic need. Dr. Katz features such strong audio that the show would work even as a radio play, but when combined with the great layouts, designs, and clever cutting, the visuals end up being the most radical and groundbreaking aspect of the show. Who would have thunk it? If you’ve already dismissed Dr. Katz and it’s squiggly non-animation, it might be time for another look.

Luckily, season one and two are already available on DVD, and this Tuesday an exhaustive 13 disc box set arrives (just in time for the holidays), collecting all six seasons of the series! Take the plunge and a let a little animated therapy into your life.
Posted by David B. Levy at 6:09 AM