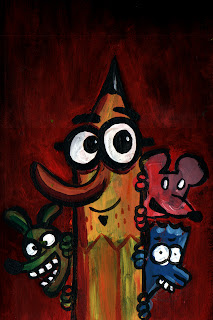 What is the supposed rivalry between animators and writers? The best answer I can muster is the fact that producers don’t often consider animation artists for writer positions. Mo Willems remains one of the shining examples of someone who has bridged both worlds with success. Sure, most animation artists that make independent films are writers of sorts. The writing that I’m talking about, that mostly excludes animation artists, is script writing for TV series. Even Blue’s Clues, a series that offered its staff many diverse opportunities, drew the line at writing. Once or twice they opened the door to script contributions from the whole staff, but it never led to an artist penning a script.

There’s an attitude that writing is writing and art is art. The irony is that the wall preventing animation artists from writing scripts does not keep “front office” staffers from similarly contributing. In the world of preschool TV, I have seen scripts written by producers, coordinators, live action directors, actors, and child development research specialists. We can’t assume that all these people are automatically qualified or gifted writers. So, why are they getting this opportunity? My feeling is that this happens because those filling these positions work with the script as their sole document. Everything they do revolves around the script, unlike animation artists, which translate and then discard the script as they convert it to a visual medium. In most TV or commercial animation, artists interpret and writers write.

If an animation artist wishes to write or be considered a writer in a studio setting, they had better write some samples on their own time. I love writing scripts. My pitch projects have given me the excuse to write dozens of scripts over the years. I first developed my writing by contributing articles to the ASIFA-East newsletter (Hint! Hint!), and next by authoring the book, Your Career in Animation. This year I’ve been in development with a TV idea of my own creation and I was gratified to function as the writer on the project and not exclusively as the artist. Six years prior, I didn’t sign my first development deal with Nickelodeon (partly) because they pigeon holed me as the artist. At that point, I had no samples to prove I was a writer and it hurt my case. Today, my current deal has already led to another deal writing a series overview and bible for a new animated property, where my role will be, among other things, head writer/story editor.

Again, I ask, what is the supposed rivalry between animators and writers? My theory is nobody can block our path but, ourselves. Only we have that power. Perhaps this could be the catalyst for a new year’s resolution?
Posted by David B. Levy at 8:32 AM