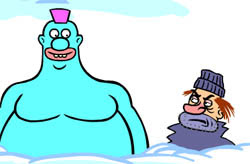 Xeth Feinberg, one of the today’s top talents, recently unveiled a string of new “Papu” shorts on line. Xeth is a one-man animation machine turning out terrific independent cartoons all within the confines of his home studio. I’ve admired Xeth’s work since discovering it at an Asifa-East jury screening in the mid-1990s. Some independent animators are content to make film after film that are similar in tone, structure, and subject. Xeth's body of work is unique in that he's made successful dialogue driven-toons (Papu), black and white pantomime surrealistic films (Bulbo), and one-shot narratives (The Old Country). Unifying the filmmaker's work is his distinct style, which seems like a mixture of Hanna/Barbera, indy comics, and the pie-eyed designs of the 1930s.

Xeth’s body of work has not gone unnoticed. Not long ago, Blue Sky recruited him for their story department, where he helped write jokes and plan content for Ice Age and Robots. More recently, Xeth directed Queer Duck, the motion picture, based on a series of shorts he designed and directed for IceBox.com/Showtime. Xeth, like Pat Smith, sets up his own studio boutique style, bringing in help as needed per commercial assignment, and spending the rest of the time entertaining his own whims making art and films. Unlike Pat Smith, who labors on each film for about a year and a half, Xeth cranks out films at a rate of one per week.

Xeth’s films are short, simple, and fast productions, and I think such a system encourages greater experimentation in form and content. Xeth’s work never comes across as precious or fussed over. His strengths lay in his wiseacre vision, which is ironic, spontaneous, intellectual, and lowbrow all at once. I wonder if Papu, a blue goon perpetually swinging a mighty hammer at both friends and foes alike, is Xeth’s answer to the trials and tribulations of the world of animation development. In that area, Xeth and I are kindred spirits, both pitching ideas to the same executives, and usually spending most of our time waiting for an answer.

In a cartoon pitch, all relationships between characters must be clear and purposeful. Papu’s very description, which reads, “An Inexplicable Force of Nature,” takes a jab at these conventions. Pen Ward’s recent short, “Adventure Time,” (Frederator) did a similar thing, by delightfully breezing it’s characters through an anti-story. In the Papu universe, characters are thrown together into relationships just to score a laugh (not a bad reason, in such a short format!). Papu is rarely without his randomly chosen companions; a generic small boy and a drunken long-shore man. This trio is as inexplicable as the big blue guy himself. Dispensing of the usual rules of a character driven cartoon, Xeth is free to spend his shorts any way he pleases.

In “Papu Family Values,” we come close to learning more about Papu, by meeting his seemingly normal brother. The brother coaxes Papu to accept a job in his law firm, but Papu quickly smashes that notion right on it’s head, helping to uncover his brother’s own “Papuish,” nature. In a similar way, Xeth prolifically churns out cartoons; aiming to win a broader audience and also court future career opportunities. Each toon becomes one more conk on the head, and I mean that in the best possible way. Go Xeth! Get your Papu-on at www.mishmashmedia.com
Posted by David B. Levy at 6:03 PM

When Xeth Feinberg walks down the street, I shout, "Out of the way, you swine! A Cartoonist is coming!"

I think I've walked behind you walking behind xeth feinberg. Now it all makes sense.
: D

I was the swine that got out of the way.

the circle is complete