Anatomy of a Director 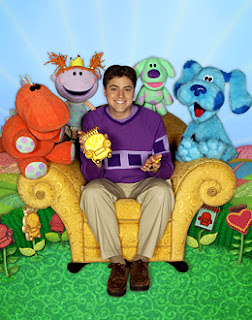 An animation director is a very rewarding position on an animated project. Often, the animation director’s duties may include shaping the production process or pipeline, creating the schedule, staffing the production, and managing the workflow while maintaining the crew's morale. All this in addition to the main responsibility of a director: creatively directing the entire process from storyboards to final delivery of animation. Whew! As an animation director, I’ve made just about every mistake possible, and perhaps I even invented some new ones.

Ironically, the best directing lesson I ever learned was from a live action director! The director was Rick Fernandes, and I was able to work with him during the live action shoot for several episodes of Blue’s Room. As the animation director, I had to be present for the whole shoot to make sure all animation’s needs for post would be met. Much of the footage we were shooting of puppets/actors (some against practical sets and some against green screen) would later feature an animated element, effect, or character added in post-production by my team of animators.

In addition to Rick, there were at least four other live action directors that season, each of them capable and skilled in their own right. However, when Rick stepped up to direct his first scene I noticed something astoundingly different. All the other directors had directed from behind the barrier of a director’s station. This seven foot high station was equipped with monitors, clipboards, water, paperclips, etc. From this vantage point, directors never made eye contact with the puppeteers, camera persons, and technical personnel. Before each new set up was shot, the directors would summarize their plan to the puppeteers and then step back, directing from behind their station as the shot was recorded.

This director’s station was close by to the back table where the executive producers and network executives sat. Most often, even after one take on a set up, the executive producers would call the directors over and start giving them notes. These might be notes on puppeteer acting, scene blocking, technical issues, and so on. All this from just one take. Often, these directors, after one take, might even seek out these notes, leaning back or stepping over to the table and fishing for notes from the uppers. With this directing style, shots took many takes before we were able to move on. Often, this lead to overtime situations, which eventually strained the budget and tired out the crew, as well as the puppeteers.

Rick was altogether different. Just like the other directors, Rick worked out a scene with the crew and puppeteers before trying a take. The difference was that once the camera started to roll, Rick didn’t retreat behind the protective cocoon of the director’s station. Instead he did something else entirely: HE STAYED WITH THE PUPPETEERS! With one eye on the puppeteer floor monitors to see what the camera was seeing, and one eye on the actual performers/space itself, Rick put himself where the action was. He saw what the puppeteers were dealing with. If one of them had difficulty getting around a piece of the set, he noticed it first hand, instead of having to shoot four wasted takes from behind the director’s station before realizing it. Rick was there for the actors and the crew. He was one of them. And, his method ensured that he (and the show) got what it needed.

There was one more method to Rick’s technique or style that really impressed me. Because he wasn’t directing from behind a station so close to the producer table, Rick gave himself more room to create and solve problems without needing to have everything spoon fed to him or weighed in on. I heard Rick explain his process to the producers just before shooting his first episode: “Let me have two takes to try to work things through. If you still have notes after that, we can go over them.” I sat close to the producer table and as Rick set up his first shot, the producers murmured concerns to each other about the lighting, acting, storytelling, scene blocking, etc. All stuff that Rick was seeing too and fixing/adjusting over his two takes. Often, by the end of the second take, the shot was in the can and we were able to move on to a new set up. To his credit, Rick always checked with the producers to make sure they got what they needed, and he was always open to any further feedback they might offer. Needless to say, with Rick at the wheel, the shoot never required over time.

This experience has stuck with me and certainly has improved my skills as a director. I try to keep close by my animators, attempting to make sure they have all their needs met and all obstacles removed so they may do their best work. There are animation directors that like to close themselves off from a production, hiding behind an office door. For example, I worked on one project where the director not only kept their door closed, they insisted on communicating with a whole in-house staff via AOL’s Instant Messenger! On a similar note, I recently spoke to some young animators working on a series here in town that didn’t even know their director’s name because (although working on the project for several months) had still never met the guy! This is sad stuff on a human level, and obviously bad for the process and the product.
Posted by David B. Levy at 1:03 PM

Hi, Dave. Thanks for a really useful, insightful post. Do you have any thoughts about how a director strikes the balance between how Rick worked, and being too involved with work done by actors, animators, etc.? I imagine that in the same way he needed space from the executive producers, the puppeteers needed a healthy space to create and do their job. Thanks.

Hi Mike,
It is a delicate balancing act, trying to be "there" for the animators and also giving them the room and freedom they need.

I like to create a reasonable schedule and give the animator only the key check points that they need to hit in terms of storytelling/acting/scene blocking...

Too much freedom is no good. For instance, one director I've heard of, gives direction like, "have fun with it." That's way too vague and will rarely result in a good piece of animation. I don't suggest that today's director working in digital animation give the animator every blink or nuance to put in, but there needs to be enough of a skeleton provided that the animator could then hang the meat on.

I think in Rick's case, the puppeteers were very happy because they didn't have to bog down and do 10 takes on every set up. Imagine having to hold your arm up with a sweaty/heavy puppet and angle your head so it's out of the shot while giving it your all for 10 consecutive takes. Rick's efficiency kept things moving, and I think he got nice spontaneous performances from the puppeteers as a result.