The Good, the Bad, and the Appealingly Ugly: 3 Types of Modern Animation Design

Design is not a topic I often write about. Yet, from my humble vantage point, I notice three camps of design in the world of modern animation. I’m speaking purely on character design, by the way. ASIFA-East just had the pleasure of screening the 2007 Best of Ottawa program and some of it’s contents seamed to back up this argument: The three types of character design in modern animation are: appealing, grotesque, and appealingly (or beautifully) grotesque. Each design type listed below is illustrated by an example from the 2007 Best of Ottawa program. Please note: no disrespect is intended towards the films or filmmakers. 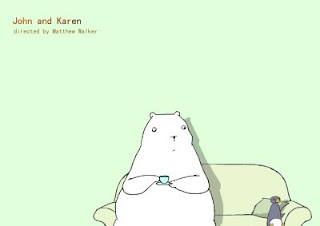 While seemingly unconventionally-appealing in design, Walker’s design represents a rapidly growing school of design that can almost now be called conventional. It’s a simple design, rooted in classic appeal but, with just enough modern quirks to give it a little edge. In short, small facial features and wide-set eyes working hard to off-set what are essential cute characters. Think of this as today’s version of Preston Blair’s guide to drawing cute or appealing characters. Animators working in this style tend to have a lot of fun moving their characters around in interesting ways. The simplicity of the design almost begs the animator to do so, not only to communicate a particular action, but also to generate visual interest in the action itself. Also, going hand-in-hand with this design aesthetic seems to be playfulness in story construction, maybe revealing an attempt to overcompensate for the simplistic graphics. The results often make for interesting filmmaking and are a breath of fresh air against the many formulas in modern 2D & 3D mainstream animation. This movement’s artists often blend both mainstream and independent careers: Fran and Will Krause, Sean McBride, Pen Ward, Mike Overbeck, David Chai, Tim Rauch, among others. 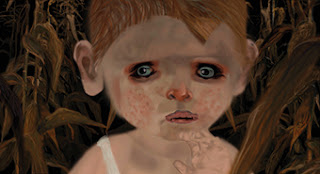 Filmmaker’s working in grotesque design styles try to repel the audience from their creations while at the same time pulling them in. It’s a big risk and requires a greater reliance on story and soundtrack to overcome the grotesque liability. Too often, films in this category are more obtuse then brilliant and only succeed in creating a mood experience. On one hand, grotesque design can seem all the more authentic and sincere in an independent film because this design style is decidedly un-commercial. However, since films like “Milk Teeth” are tailor made to play well at film festivals, perhaps they are commercial creations within the confines of the festival world. These are good ponies to bet on at a typical animation festival, whether or not the films themselves have any merit. Grotesque Design seems to have it’s roots in European art and seems all the more alien to these American eyes. I’m reminded of the message in many classic RKO films from producer Val Letwon: Americans don’t know how to grieve. In short, as a people, we haven’t suffered the way Europe has suffered over the centuries. Grotesque design is filled with the potentially rich cocktail of misery, grief, loneliness, and isolation. This movement’s artists are these darlings of the independent film festival circuit: JJ. Villard, Signe Baumane, Priit Parn, Igor Kovalyov, Phil Mulloy, Marv Newland, among others. 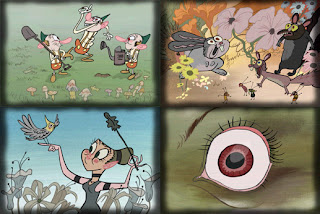 Filmmaker’s working in appealing grotesque design styles try to take the best of both worlds of design and stitch them together. Nick Cross’s film is a great one to analyze because it does this movement credit in showing that perhaps it takes a master to find the beauty in ugliness, and vice versa. “The Waif of Persephone” also shows an advanced filmic sensibility that goes far beyond the typical cartoon form. Drawing and composition seems be the most important asset in a film such as this. Here, the director even has the confidence to let many scenes in the film stand naked as still images held on the screen for long periods of time. In this film, director Nick Cross pays homage to a former employer, John K, and it’s hard to miss the influence. There are others that have explored appealingly grotesque design, but, none more so successful than John K. His “The New Adventures of Mighty Mouse” and original “Ren and Stimpy” remain the holy grail of this movement. Similar to the first group on this list, this movement’s members are also interested in moving their characters around in unusual ways. The problem is this style (itself a revival of some attributes of golden age animation) is now twenty years old. Yesterday’s ground-breaking art becomes today’s establishment and that’s one way to view the artists working in this style. Character animation in this movement follows it’s own formulas, however free it may appear. The main concern seems to be in exploring ways to freeze and unfreeze a character. In such a way, the cartoony-ness of these films becomes center stage. I don’t offer this as a plus or minus, just as an observation. Besides John K, other obvious heroes of this group are Bob Clampett and Jim Tyer, both known for their wild bursts of movement and rebellious lack of concern for staying too close to a model design. I have to take my hats off to this group, because of the three types of designers in this list; this group is the most able of draftsman and the most adaptable to work in any style. Perhaps the only negative is a tendency for these artists to give themselves too wholeheartedly to the movement, even at the risk of their own individuality. Still, nobody can deny this movement’s artists are some of today’s top industry talents: Stephen Hillenburg, Jared Deal, Phil Rynda, C.H.Greenblatt, Bill Wray, Teddy Newton, Gary Baseman, John R. Dilworth, among others.


Of course, it’s impossible to really categorize all design and all designers into these three boxes. I realize this list is overly general. Artists will never cease to find new ways to create their own particular blend out of all the possible elements. Design is an interesting thing to ponder, in part, because whatever strokes you make are at the exclusion of all others…that is, at least, until the next line, which brings yet another choice.

Thanks for another insightful post! I was a bit surprised and very flattered to see my name mentioned as part of the first group. I took the opportunity to explore the elements of "Appealing Design" as you describe it and relate them to what I am trying to do with the films I am currently working on. Let me offer up my full response posted over at my blog here.

Are you really sure about Signe Baumane being grotesque? I always thought she was somewhere else on her own, between simple design and grotesque action.

Mr. Levy, I am assuming these design categories are only relevent to the present day in animation.
It's a nice breakdown, however, and very clear. I guess I am all for the appealingly grotesque design, because of its flexibility. John Dilworth and John K. exemplify it beautifully.

Wouldn't you say there is a category for artists like Bill Plympton, Patrick Smith, Joanna Quinn, or Peter Chung. I always thought of their designs (fine arts/realistic influenced) as remaining part of modern design?

Thanks, Tim! I'll check out your site now.

Emmett, I agree it's hard to pin down anybody to a list like this. Certainly, Signe is a great artist with a good range. I love her illustration work, in particular. I think she's incredible. I think her design belongs in this category, but I appreciate your point that she might better belong between category one and two. A grey zone, perhaps?

The second part of your question is interesting too. I think those four filmmakers are stylists, working in one main style that comes out just as clear in some of their commercial work too. All great artists that seem to put the main emphasis on drawing, itself...and they are not afraid to have a drawing look like a drawing! You gotta respect that.

Emmet pokes at the big hole in Dave's argument. Not everything can be summed up into tidy categories, nor should it. Some artists are just so unique (PES, Plympton, Quinn) there aren't too many people who look like them. They have extraordinary individuality and really aren't so easy to speak of as being part of a "type". I want to be like that when I grow up!

Still, I think Dave has identified three groups which appear consistently in the world of animation. It's just not an all-inclusive list, which Dave admitted to in that last paragraph.

I do want to remind all that the original point here was to describe 3 movements of design you see a lot in modern animation. Yes, there are things that fall outside of this, that are more difficult to categorize.

However some styles/filmmakers seem to be part of a larger movement of design and that was my point. Food for thought.