How I learned to Stop Worrying and Love Kids Films 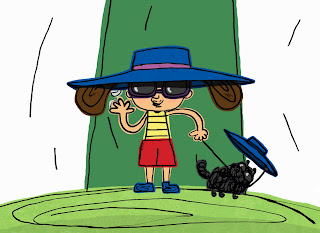 This weekend, my film, Good Morning, was featured at the BAMKids festival. This festival, now going on 10 years, is an offshoot of the Chicago International Children’s Film Festival. My little film (clocking in at barely over a minute), played to four sold-out screenings spread over the weekend. Each screening was followed by a Q and A, featuring Bob Charde (Good Morning’s composer), and my ol’ Nickelodeon-era animation pals Jen Oxley and Eric Weil, whose film, “Janie and Jerome in “Light’s Out,” was also featured.

The children’s film festival circuit is a curious affair. First off, it’s amazing to have your film shown to an audience anywhere. The curious part is when you realize the audience is mostly young parents with tiny tots in tow. Try saying that five times. Lurking among the family audience are a handful of industry people, including some network development executives and other international festival directors.

No rules always seemed like a trap to me. I like creative rules on which to build a film’s structure; something that I can push up against or break through at will. Maybe this is why I respond to children’s films or why I have utmost respect for the medium. A great children’s film transcends the label, “children’s film,” and simply stands as great film, period. Immediately coming to mind is Gil Alkabetz “A Sunny Day,” (see picture above. The film's craft is near perfection; great concept & story, great timing/posing/animation, imaginative layouts/continuity, attractive design/color styling, tight pacing/storytelling, bursting with charm/humor, and featuring a killer score/sound design. For more on this film/filmmaker, go to: www.sunny.alkabetz.com

We all know animation is a stepchild to the larger film and entertainment industry. Yet, within this stepchild are other subdivisions. All too many of them are self-imposed. One obvious stepchild is the respectability (or lack of) in the area of children’s films. It ain’t never been cool to make films for kids. How ironic that unlike any other genre of independent animated film, only the “children’s film” has the potential to reach everybody in the audience.
Posted by David B. Levy at 7:41 PM

Ha! That's a good point. I think that even if one makes a children's film and enters it in a children's festival, it doesn't quite hit home that you've really made a "children's film" until you are sitting amidst the audience of 2-5 years olds. Until then, it's more abstract. At least, that's how I've felt.

I think I've been damaged into believing that you've got to be in competition in Ottawa or Annecy to have really made an impact with a film. I'm retraining my thought process over time...

It's nice that there are so many fests these days that cater to all the different audiences out there.

Hi, Dave! Thanks for the thoughtful shout-out. It was a blast sharing the screenings and q&a's with you.

One virtue of the kids' festival circuit is that you know where you stand with your audience right away. In the adult world, sometimes an ostensible compliment like 'good' really means 'adequate,' 'forgettable,' 'noxious' or even worse. In these cases, you need to hear superlative praise from the grown-up before you have any confidence that they found your work, well, good.

It's so refreshing to receive a compliment or applause from a young kid, because you can actually take it at face value. There were a lot of well-deserved compliments in the audience for Gil's film, Dave and Bob's piece and several others. Sometimes even the palpable sense that the kids focused on your film throughout (i.e. the all-to-rare silence during a kids' screening) is high praise from this crowd, because although they are young and a little unpolished in their behavior, they tend to be incredibly SMART.

And the intelligence of kids is a trait that far too few grown-ups-- including some who are programmers of kids' tv-- seem willing to acknowledge.

Hi Eric,
Well said. You're right about kids, too. I heard a lot of kids speak their minds right after each film. Talk about a focus group test! I was amazed that more preschool development executives didn't make it out to the screenings...

Maybe they were still exhausted from kidScreen.