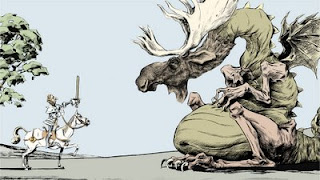 It’s been called the Tribeca of Children’s Film Festivals, and after spending a weekend at The New York International Children’s Film Festival (NYICFF), I’m inclined to agree. I was blown away by the sold out screenings, lines of people down the block (hoping to purchase a ticket) and the amazingly attentive audience comprised of mostly parents with young children.

I’m getting to be a bit of a festival hound and it’s fun to be able to compare and contrast the festivals. Most indy animators make films with one eye on Annecy or Ottawa. These are the sexy festivals with a large concentration of filmmakers and industry execs in attendance. In fact, many who attend these aforementioned festivals go more for the social mixing than they do for the screenings. The emphasis is on networking. At a festival such as NYICFF, the equation is flipped on it’s ear. At NYICFF, it’s about the films. Maybe I’m a little out of step, but that’s a pretty sexy idea to me.

Here’s how NYICFF describes itself (posted at www.gkids.com):
"NYICFF was founded in 1997 to promote intelligent, passionate, provocative cinematic works for ages 3-18 and to help define a more compelling film for kids. Since its launch, the event has grown to become the largest festival for children and teens in North America, with a paid audience of over 20,000 attending the most recent event. Since 2000, all screenings have sold out in advance.

Each year NYICFF presents a highly selective slate of the best animation, live action, documentary and experimental film from around the world. The next annual, city-wide festival will take place March 2008. The three week festival will present 100 new films in competition plus gala premieres, retrospectives, filmmaker Q&As. workshops, receptions, and the NYICFF Awards Ceremony. NYICFF also presents screenings and premieres throughout the year at the IFC Center and other locations."

Before I contrast NYICFF with Ottawa or Annecy I should point out that there were several indy heavy hitters represented this past weekend. NY’s PES had “Dogs of War” and “Game Over.” Russia’s Konstantin Bronzit had “Lavatory-Love Story.”
Also featured were, Georges Schwizgebe’s “Jeu,” Claude Clouteir’s “Sleeping Betty” (see image above!), and my favorite film, Oleg Uzinov’s “Zhiharka.” I’m happy to add that my film, “Good Morning,” was also in the mix, but I figured you might have guessed that already. Note: You can watch Good Morning by visiting: www.youtube.com/watch?v=4yUV4DJGvRc My amazing composer, Bob Charde, was kind enough to make this link. Thanks, Bob!

I understand that “film selection-wise,” a festival such as Ottawa looks to serve an undernourished need. Through the guidance of Chris Robinson, you get a lot of experimental films, and the narrative films tend to be abstract or non-linear. After five days of Ottawa screenings I find myself yearning for something a bit more satisfying and my cravings are usually satisfied by Ottawa’s films for children category. However, Ottawa can only program one such screening, and they are surprisingly conservative when picking children’s films. In contrast, NYICFF, is able to offer children’s films, sometimes so bold, that they blur the line, erasing the definition of what it might mean to be a children’s film. Over the weekend, I watched films with themes on homosexuality (“Donkey Girl”), eating disorders (“Ice Floe”), as well as one hell of a grown up take on dance competitions in Australia (“Razzle Dazzle”).

As I watched the range of these so-called, “kids films,” I couldn’t help but think that Pat Smith, Bill Plympton, and Andy and Carolyn London (among many other top indys) often produce films that would play well at this festival. There was another phenomenon that should not go unreported. My film played in the same category as Mo Willem’s “Knuffle Bunny,” which was directed by Maciek Albrecht. Before the films even played, the audience was abuzz with parent’s whispering, “Knuffle Bunny” to each other. Mo has found incredible success with today’s parents and children with his wonderful run of children’s books. I, for one, appreciate that Mo helps show how children’s films can be hip and cool, while at the same time satisfying a general audience.

The lesson here is that NYICFF is redefining what might be considered a children’s film. Isn’t it about time us filmmaker’s followed suit?
Posted by David B. Levy at 7:55 AM

Thanks for posting about the festival, Dave. I couldn't make it this weekend, but I remember having a similar feeling last year, that it was an unusually strong and diverse group of films. Another good reason to be a New Yorker!

my pleasure.. and least I forget to mention, next week is the BAMKids festival in Brooklyn! Another chance to see some cool films.

I went to see the shorts for tots at the NYICFF and I can't get your film out of mind, it was excellent. My daughter loved it, especially the song. Is there a way to get the song?

Hi Laura,
Thanks so much for the kind words! Try contacting the composer of Good Morning, Robert M. Charde. Click on his youtube link in this blog post and it should have his contact info. Let me know if you have any trouble.