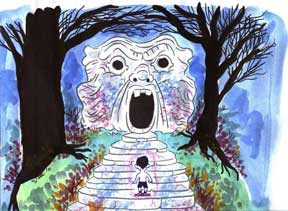 On March 11, ASIFA-East held a jury screening for the student category of our 39th annual animation festival. At our festival, the entire community of ASIFA-East members (that come out to vote) make up the jury. Not only does this make our festival the most democratic and fair animation festival in the world, it’s also the only one that opens up its selection process to the general public. Perhaps, most notably of all, there are often a handful of the filmmakers present, suffering through a special kind of hell that only a filmmaker in competition can understand.

The first reality we dealt with at our student jury screening was that we were at least a half hour shy of enough time to watch every single entry all the way through. Even with such a restriction, we were still committed to watching over 2 and 1/2 hours of student films. Perhaps most positively, the films we stop prematurely will let us watch the more worthy films all the way through and keep the audience from getting overly fatigued. Still, it’s hard to NOT to think of your film being stopped as a traumatic event. In total, we called time on 7 films this evening. More than once there were murmurs in the audience reflecting a dissenting opinion. At ASIFA-East, we require one person to motion stopping a film (by shouting out, “TIME”) and then at least one more individual coming forward to second that motion. Instead of that scenario, usually the first uttered “time,” unleashes an echo of support from dozens of jurists too shy to have spoken first. We have our consensus, the film is halted, we vote, and we move on.

The good news is that, over the years, several films that have been stopped early have gone on to win a prize at our festival. If we stop a film, it doesn’t necessarily mean that the whole audience hates the film. It does mean that the jury has seen enough of the film so to evaluate it on the ballots.

At the end of the screening, one ASIFA-East jurist came up to me and said that it was a shame to stop any films early because for some of these filmmakers it might be the only chance to get their film screened. I see that point. However, we proudly offer one open screening per year in which everyone may present a film in a safe, supportive and non-competitive atmosphere. When it comes to our jury screenings, we’re supposed to be critical, separating the wheat from the chaff. If any filmmakers feel that they were denied their one chance at a screening, I would offer that they should make more films, better films, and spend more energy towards getting them screened and into festivals.

At a jury screening, films must quickly earn even their first few seconds of screen time. I personally begin to watch each film with a middle average score in my head and what I first see and hear immediately starts accumulating points positive or negative. Production values, quality of craft, ability to convey an idea or technique, all come across in those first few seconds. In this generation of youtube living room animators cranking out films, we filmmakers entering films at the ASIFA-East festival and squirming through a critical screening of our own film have an opportunity to learn and grow from the audience response that is virtually unparalleled anywhere else.

As democratic as we are, I don’t always personally agree we every film we honor or deny (nor should I.) We are a community of voices choosing what makes it into our festival. I can’t help but recall a jury screening two years ago that included John Canemaker’s “The Moon and the Sun,” (pictured above). The very personal film played all the way through to it’s half hour conclusion without the audience calling time, but clearly some in the audience might have wished too, which I find very perplexing and disheartening. “The Moon and the Sun” didn't place at the festival that year, but went on to win the academy award for best short subject at the 2006 Academy Awards ceremony. No single jury’s taste, however how big the jury, represents the final word on a film or a filmmaker.
Posted by David B. Levy at 10:38 AM

as a student filmmaker, I find the entire open jury process completely terrifying. Seriously terrifying. But it's good to remember that the same process goes on internally at any festival--it's just on a smaller scale and much less public.

And having a large open audience to watch the films isn't always a bad thing, either. Laughs can feed other laughs, heighten tension, and completely transform the viewing experience for an audience.

Stephen,
Not only is the jury process smaller at other festivals, it's also far less democratic. At a festival like Ottawa, you have a handful of people who select films (a selection committee) and then the festival director Chris Robinson makes the final choices. With ASIFA-East, its the voting members choosing (which could 75 jurists in some categories) and then an independent accountant tells us the results. That's our festival in a nut shell. The only one like it in the world.

The MPAcademy has a similar process in selecting Oscar nominees. Their qualifying screenings can go on for more than 5 hours. I know that my film, The Marzipan Pig, (one of the favorites of all my films) was the last film on a long program. It's a half hour film. The audience stopped it a minute in. They'd had enough to watch that day, and my film was bumped.

I'm glad I wasn't there that day, but I understand how film makers might feel. The NY chapter of the Academy watches the films all the way through no matter how dreadful or long.

However, I still agree with this procedure of stopping films. It's part of the film making process.

Marzipan Pig is such a great film and it really builds it message over the half hour. It's a shame that the voters didn't stay with it.

Where a film falls in the screening can end up making a difference in how that film is recieved. Sometimes its in our favor, other times not.

Over time, good work is recognized one way or another, awards or not.