Is Imitation really the Greatest Form of Flattery?

It didn’t turn out so well for Dr. Frankenstein and it doesn’t work so well for animation. There was a recent dog pile of praise for Pixar’s new short, Presto, by some commentators on cartoonbrew. http://www.cartoonbrew.com/shorts/presto-on-itunes#comments
In general, the commentators’ premise is that if something conjures up a Tex Avery-like approach, it must be good, and therefore a good direction for Pixar to explore. I guess their idea is that animation has nothing to say today, so we can only advance by making inferior copies of the styles and techniques of yesterday. I too, noticed that Pixar’s Presto was a love letter to Tex Avery. Yet, this didn’t automatically lead me to believe a Tex Avery influence equals a good film. The film still has to stand on its own two legs (or four paws). The newish Goofy short, How to Hook Up Your Home Theatre, was similarly well received by the animation community. But did we need another Goofy short from the “How to” series which ended in the 1940s? Is the ‘act of imitation’ what we celebrate now-a-days?

There are rare moments where something genuinely new comes along and advances the artform. The above two examples ain’t it. Isn’t it funny that the same people who argue that animation has the potential to be the greatest of all mediums are often the one’s wishing to restrict it to the land of Disney’s 9 Old Men, Chuck Jones, and Tex Avery? As brilliant as these founding fathers of our industry were, they offer us a creative straight jacket if we try to follow in their exact footsteps. Thank goodness Bob Balser and George Dunning didn’t hold that belief when they gave us The Yellow Submarine. And lucky for us, Yuri Norstein didn’t get the memo that he too needed to live in the past. Otherwise, how could he have created Tale of Tales? Note: both pictured below: 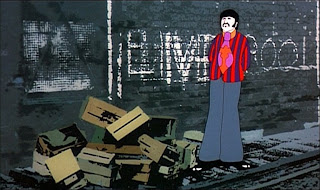 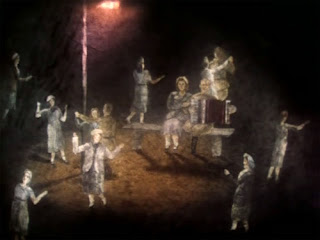 Is the golden age of animation great? You betcha! Did it provide a foundation for the art and industry of all that followed? Heck, yeah! But do we do honor to these heroes and their innovation by mirroring them, OR, by continuing to blaze a few trails of our own? The greatness of the golden age of animation lives on, not in Pixar’s Presto or in Disney’s new Goofy short, but in the work of animators like Paul Fierlinger whose work has the power to make us laugh, think, and cry with as much power as the best work by The 9 Old Men, Chuck Jones, and Tex Avery in their prime. Fierlinger does this, not by mimicking the styles of the past, but by honoring his own artistic vision. Today, animation’s past legacy lives on, but not where most people are looking for it.
Note: still from Fierlinger's Drawn From Memory pictured below: 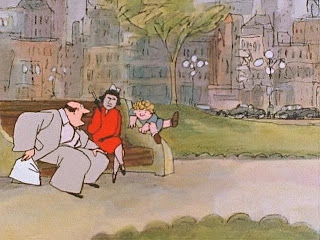 An interesting and necessary analysis David. I think the challenge is proving to studios that new directions, while having slightly more risk, can often bring enormous benefits, if done correctly. Unfortunately, Hollywood seems to have settled into a comfortable loop of scavenging anything they can from the past that has a known commercial value.

The animation industry has been largely spared this, and with a large pool of very talented people, it would be a shame for it to fall into complacency and simply mimic the greats in the hope that some of the magic will rub off, much like The Simpsons has done for laughs in recent years.

A homage is best served subtly, in a way that does not distract or detract too much from the film. Hopefully there will not be a shift in the wrong direction that could stifle creative talent.

Thanks for the comment Charles. I don't assume that commercial projects will always breakground, but what worries me is how so many of those artists that work in this industry can only recognize something that is replicates the past (as if that's all any project needs to do.)

This is what can make us truly creatively bankrupt––if we, the artists––decide that we have nothing to say but reflect former glories.

I remember sitting through that Goofy short and squirming. "Haven't I seen this before? Isn't this one of those shorts I hated when I was a kid (and completely turned me off the Disney product)?"

Animators have this obsession with nostalgia that leads to a fetishizing of past generations. How else can you explain all the toy collectors and coaster enthusiasts?

That is an excellent piece of theory for budding filmmakers to think about. I'm currently working on some animation for my dissertation, and I maybe influenced by the stuff from the Golden Age of animation, but I am not trying to emulate that classic animation style by presenting my own style and approach to my animation- I am currently developing a showreel of both past and present work, which means I have to showcase my work to the highest standard for employers to have a look at.

A good piece of writing, as usual, and I was happy to see the Fierlinger. I was just watching that film the other night! Can't wait to see his latest when it's finished.

This is a great analysis, Mr. Levy.

I can't say that I feel all animation has to say something, but I do understand the need to see something totally different and original. I see how stuff gets mimicked and it harms the wholeness of a piece. However, if you are totally focused on the story, character or overall idea, you realize you need to do what works best for that, not just any style.

I just saw Presto for the second time. Someone compared it to a short film I did with a similar premise. Regardless, Presto is very charming and beautifully crafted. I saw more of a Donald Duck influence in it, than of Tex Avery, although I could see a few parts of influence. Pixar is more original than most of the other 3D studios. And everytime Pixar has a new idea, someone else tries to pull off a so-called "homage" to Pixar.

uh oh. I'll say upfront, I liked presto. To me, the short is successful for showing that old-school techniques are still very much applicable today.

I think we've got to consider what it means to make a short at a large studio. spending millions of dollars on something that won't make any money whatsoever.

shorts are made as exercises in technique, to train new talent and use new skills. And if the studio is fortunate, they wind up with something entertaining that maintains their brand image, something good enough to put in front of their film on the big screen after 20 minutes of bad commercials and lame previews.

It's all very different from making a short as an independent or at a small studio, where the way to make money (if at all) is by keeping the overhead ridiculously low and doing it because you love the work.

Hi All,
Stephen, I love that Pixar and Disney are making shorts to train their staff up and so on... I hope those techniques won't be learned in vain to serve future work that just simply looks backwards.

At the same time, I don't expect Pixar of Disney to be cutting edge or different. I do get dissapointed to see so many animation artists jump on the bandwagon and look on this work as the cat's pajamas.

Picasso wouldn't have gotten anywhere if he spent his whole career trying to be Rembrandt. Animation needs to grow up, big time.

Amen to that, Levy.

Great commentary here. There's absolutely nothing wrong with paying homage to the animation greats of the past -- that 'golden age' was intrumental in inspiring hundreds of thousands of artists to get into the biz of animation -- so of course we're going to have plenty of imitations out there. But when it looks like someone's aping past work, then there's a problem. However, I don't see that in Presto or the Goofy short. Those two cartoons allowed the past a platform to spring off from. Both are highly entertaining to me.

But I love seeing vanguard artists give us new and exciting ways of looking at our world as well. That's why animation festivals are fascinating to me -- to experience artists and animation from across the globe. I love the new.

Oh, and I should say that even Picasso started out emulating his heroes, like Goya. It was through this knowledge of history that helped him achieve the iconoclastic nature that he was so well known for. The same can be said for all of the iconoclasts in animation as well.

Hi Ward,
Thanks for stopping by! I enjoy your blog very much. And, I hope to reconnect with you in Ottawa, if you're going.

My feeling is Presto and the new Goofy short don't have anything to contribute outside of, "look, we can do this too." Maybe that is enough, especially in a commercial short for mass consumption. But, I don't find much value in it.

I don't suggest not honoring or not studying the legacy of the past, but I don't think we do the past justice if all we have to offer is a regurgitation of their exact point of view.