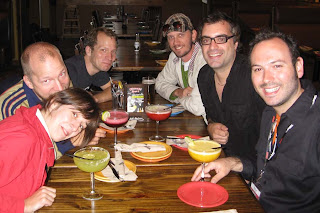 I just flew back from the Ottawa International Animation Festival and boy are my arms tired, eh? By throwing the word, “eh” at the end of that tired old joke, it becomes Canadian. Trying to write about attending this festival is like having to write a school essay on what you did last summer. Besides, there’s already some stellar coverage of the festival on blogs such as Michael Sporn’s splog at www.michaelspornanimation.com. So, instead, here’s a bullet point summary from me:

-Traveling with my buddy Justin Simonich, we arrive in Ottawa at 9:30 AM on the first day of the festival. We enjoy a tasty breakfast at Dunne’s (a sort of cheap diner on Elgin Street near our hotel). We are joined by New York animation artists Willy Hartland and Phil Lockerby (who is actually Canadian!). Check out Phil’s blog at: drawingonnapkins.blogspot.com. Willy shows us some pitches he plans to show at TAC (the festival’s TV animation conference.) We toast our coffees to wish him luck. Maybe we should have toasted our bread instead. At other breakfasts we dined with Linda Beck, David Watchenheim and his studio stalwart Glen, as well as Chris Boyce.

-We finally find the Arts Court building to sign in to the festival. I’m terrible at direction, which gives Phil a chance to ask numerous pretty girls for directions along the way.

-At the Art Courts building I’m happy to see my book is displayed for sale on a table also holding DVDs by NY indies Signe Baumane, Pat Smith, and others.

-We start to hear the first of countless complaints that there is NO central meeting place at this year’s festival. In past years, the NAC (National Arts Center) served as a swanky festival hub, allowing attendees to meet, bump into each other, as well as saving us from having to trek all across town to other venues.

-I’m reminded how seedy Rideau Street is near the also-seedy ByTowne Theater, which serves as one of the festivals main screening venues. We notice a homeless man squatting on the floor carving raw meat off a small animal’s bony carcass. On that note, it’s time for lunch! Ottawa is overrun with pubs and for me that means lots of delicious cider! It’s also another chance to NOT order the local Canadian treat “poutine,” which is French fries drowned in gravy with some cheese curd mixed in for good measure.

-I only made it to one panel discussion, but luckily it was a great one on humor in animation moderated by Amid Amidi. On the panel were Nick Cross, Fran and Will Krause, Christy Karakas, and Martin Pickles. It was here that I learned about Amid’s sneaky moderation style, which is to spout strong opinions that might get a rise out of the panel and the audience. Hmmm…sounds also like his posting style on cartoonbrew, no?

-In my opinion, the heart and soul of the festival were retrospectives on the work of Michael Sporn and Skip Battaglia, and the class reel from RISD. Amy Kravitz, RISD’s animation department chairperson, picked up a special award at the festival for her outstanding student’s work. Go RISD!

-The unjust award goes to the snubbing of Bill Plympton’s and Nina Paley’s features in favor of the more commercial leaning CGI film “Terra,” which some thought to be Terra-ble.

-Fran and Will Krause picked up the kids jury award for their outstanding pilot “The Upstate Four,” and the audience was charmed by the kid reading a summery of the film from her own point of view. A miscommunication between the brothers resulted in the award being left behind at the closing party at Helsinki bar. Luckily it was recused the next day and is being mailed to the brothers, who promise to be more careful with their next award.

-Justin Simonich and Linda Beck began shooting a very special film project at the Ottawa festival, which you will no doubt be hearing about soon.

-J.J. Sedelmaier sported some killer facial hair and sat on a panel moderated by Ward Jenkins on the state of animation education. Richard O’Connor not only did a killer karaoke version of “China Girl” at the closing party, he also moderated a panel on feature animation.

-Yo Gabba Gabba clips dominated the kids category at the festival and among the best was Willy Hartland’s “Pick it Up.”

-The bees were out in full force at the picnic...so they could welcome the queen bee Candy Kugel, who’s film dEVOLUTION played at a special festival screening. To this, Candy responded with dELIGHT.

-While trekking to History of Civilization-held closing ceremony, we spot two live beavers across the street...causing me to exclaim, "I'll be damned!"

-Otis Brayboy made homemade chicken soup for 10 people who all drove up and stayed together in a couple of hotel suites. Among the lucky soup slurpers were Dayna Gonzalez and Pilar Newton.

-I enjoy a nice chat sitting next to Heather Kenyon on the flight home where we thumb through the latest animation magazine together.

Otis never told me he could cook! What a great weekend, and we'll have to do this again. Are there any links to your shorts?

Ottowa is starting to sound like a lot of fun. I'll have to consider going next year!

PS. Another 5 star review for your book on Amazon.com. The recommendation from yourself was very much appreciated.

haha! the krause brothers leaving their award behind...that's priceless. sorry i missed that party! and yeah, on a downer note - i heartily agree that the feature selection was (lol) Terra-fying. i thought Bashir was in for the win fer sher, and Nina's film was outstanding. glad i got to run into you at oiaf!

You can find a link to my last short at:
http://www.youtube.com/watch?v=4yUV4DJGvRc

Hi Charles,
Yes, you gotta check out the Ottawa fest. And thanks so much for the kind review! I'm so glad you dig the book. I'm working on building an author site at the moment. It will be davidblevy.com. You can check it out now.

Hey Jessica,
Great to see you again at the fest. I'm hoping to come to Chicago next year around this time to come to the Chicago Int Children's Film Festival. Hopefully I'll see you there!