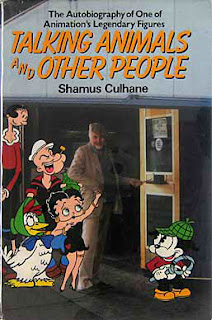 When it comes to all-time treasures of New York animation, Shamus Culhane is high on the list. I'm sad to say that the only time I met Shamus he was wheelchair bound and in the last months of his life. The occasion was at Jerry Beck's gala 1995 event to celebrate Famous Studios. In the mid to late 1960s, Shamus had briefly headed up Famous Studios before the torch was passed to Ralph Bakshi shortly before the studio folded.

Howard Beckerman was kind enough to introduce me to Shamus. I remember I had to lean in close to hear him- so weak was his voice at the time. I complimented him on his Woody Woodpecker cartoons. "Ski for Two" is my favorite Woody Woodpecker cartoon," I reported. "Everyone only wants to know about my Woody Woodpecker cartoons," he replied, before he asked me if I'd read his books. I explained I hadn't, but promised that I would buy them straight away. I kept my promise and soon bought a copy of his first a book, a memoir of his days in animation called, Talking Animals and Other People.

There's bits in the book that have never left my head, such as:
-Shamus's notion that the union squashed work opportunities in NY and were actually destructive to the local industry. Not to mention his on-going war with union business manager Pepe Ruiz (who at age 86 was run over and killed by singer Wilson Pickett!). Real life is always stranger than fiction!
-The huge pay cut he endured to snag a job at Disney at which he had to virtually start over from scratch and be trained with the latest crop of newbies coming out of art school.
-The time he had to confront an animation saboteur who was hiding his work at the Ub Iwerks studio.
-His bizarre description of working with "Three Little Pigs" director Burt Gillette at the Van Buren studio in NY.
-His rise to heading up his own million dollar animation studio in NY in the 1950s, which banged out tons of commercials in NY's golden age of Advertising. Mad Men, anyone?

Now, bear in mind that I first read this book at the height of my Marx brothers mania. Knowing the time Shamus was active, I wondered if there would be any Marxian encounters in the book. Imagine my surprise and delight when Shamus casually mentions that he was married to Maxine Marx, the daughter of Chico Marx! Wowsa!

The main impression I had at the end of the book was what a survivor Shamus was. And, we need survivor stories now-a-days more than ever. Shamus is long gone, but he lives on through his memoir. I liked to read it over a bagel and coffee, calling it my "breakfast with Shamus." I think I'm due to read this book for the fourth time. There's plenty of room at the breakfast table. Won't you join us?
Posted by David B. Levy at 3:12 PM

I always enjoy reading the writings of artists, especially when they have to do with issues other than technique, and talk more about ideas and philosophy of art (which to me seems so much more important than technique (especially when coming from the artist and not a critic or historian)), and anecdotals about working.

I will look forward to reading this one. Thanks, Dave.

I'm currently reading "The David Levy Story".
It's a lurid expose' of the dirty underbelly of the NYC animation community.

The first book concerning animation I read was "From Script to Screen", this was the second. Probably shortly after his death.

The one thing that stays with me (since I've forgotten more about animation than I'll ever know) is his tone. There's a sense of being slighted by history, or trying to justify his legacy.

Knowing what I know now, you've inspired me to re-read it.

Is that mood really there?

If so, is it just part of the East Coast/West Coast continuum. He would be what we consider a "West Coast" animator in New York. There they probably considered him an Easterner.

I think the tone of the book you are remembering is in there to some extent. He does have the agenda of preserving his own legacy, especially when you think of the fame that his contemporaries were finally achieving by the time he wrote the book. Think Chuck Jones, etc.

Shamus spent most of his years in NY animation, so I would consider him a NY animation guy who did some years in the West Coast. Plus, he was the first president of ASIFA-East, and that seals the deal.

Despite what Shamus may have tried to do with his book, he ended up painting a picture of a bygone era and in the process, revealed more about himself than he might have intended to.

When I first checked this out from my local library as a kid, I was really hoping it was going to teach me how to animate. Instead it was filled with all these politics, attitudes, and strange names like "Ub Iwerks."

I got through it as best as I could without understanding much. it's definitely time for a re-read.

I wish I had known about this book when I was a kid. Now we have a glut of books, websites, schools, DVDs, etc, that try to teach us how to animate. But, all this time later, books like Talking Animals and Other People are all the more special because they offer individual insights into animation and its history. In this field, that's all too rare.

Hey David:
Long ago, when I was fresh out of art school, I bought an original pencil Disney drawing at a local gallery. It was from "Mickey's Hawiian Holiday" and was a tight pencil of a crab sitting on Pluto's nose. The gallery owner told me it was drawn by Shamus, who I had never heard of (the Nine Old Men, yes, Shamus, no) His book had just come out; when I read it, I thought it was a wonderful documentary of what it was like to be in the biz in the old days when it was all starting. Amazing eye witness stories...the guy worked at every studio! Long story short--
I went to NYC on a business trip, and I looked up Shamus in the NYC phone book...there he was. I called him up and asked if I might come over and meet him. He graciously spoke with me in his home for about half an hour, and signed my copy of his book AND the Pluto drawing he has done so many years ago! I showed him some of the cartoon art I was beginning to do myself, and he said "You got a real nice style there, young feller!". I will never forget that trip and afternoon. I highly recommend everyone interested in animation history to read his book "Talking Animals and other People".
And thanks for keeping up your blog, it is terrific!

ok, now I really want to read that book!

Great story about Shamus! Thanks for sharing that...