The Joy of Animation 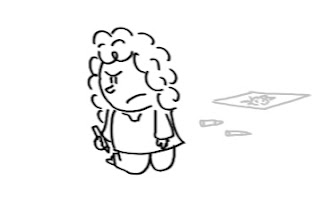 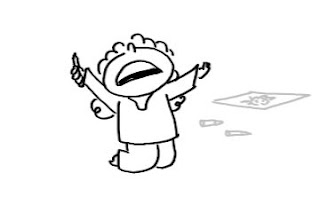 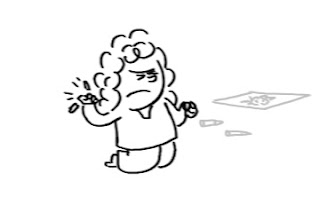 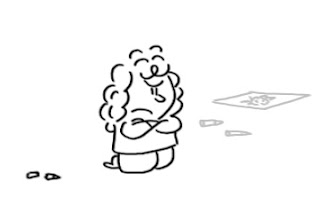 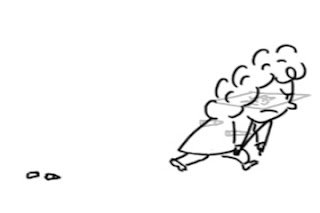 Animation bloggers spend much of their time touting news, analyzing industry trends, spotlighting unsung artists, or preserving the past. My mission has been to discuss all-things-NY-animation, but I just as often share strategies on how to build a career in this unusual business. Along the way, my blogging buddies and I, tend to overlook one elemental thing: the joy of animating.

For me the joy in animation comes from animating ordinary moments in a character's life. For instance, in my new children's film, Rabbit reluctantly agrees to keep his promise to Owl and sit down for a game of checkers. In the pilot I'm currently animating and directing for a client, a little girl breaks a crayon in frustration and then walks out of scene dejected (see above stills pulled from the film).

I think the indie filmmaker has a better chance at bringing some truth to life than an animator that just makes the occasional animation test or sample for a reel. When you make a such a sample scene for a reel, its largely a technical exercise. You might animate some lip synch, or a walk, or a special effect. But, when you have the burden of an entire film, complete with smaller connecting scenes, you are forced to confront smallish moments.

Neither of these scenes are dripping with high octane action. There's no epic sword fight, battle with a dragon, or robot space war. Instead, these are ordinary moments, which (as an animator) I hoped to imbue with insights into the characters, revealing their thoughts, feelings, and motivations. That's the joy of animating for me. And, its in these ordinary type of scenes that live the potential to really bring a character to life. Everything about these little scenes interests me. For instance, I love figuring out what part of the character should lead the action and how that choice reveals how the character is feeling. Or, where to place a blink. Everything is choices. In other words, what to leave in...what to leave out, as Bob Seger sang in his hit song, "Against the Wind."

As I see it, an animator has a responsibility to their characters...and this is something that goes well beyond the ability to keep a character on model. In my film "Owl and Rabbit Play Checkers," the characters go on and off model at times, but they are always "in character." Their animation is always informed by character. I am wagering that in this film, that is more important than technically perfect drawing. And that comes in handy for me because I can't do the technically perfect type of drawing anyway. Long ago I stopped caring what the reason was: Either I don't have the talent for it, or I'm just not interested in it. Perhaps its a little bit of both.
Posted by David B. Levy at 8:18 PM

Staying on model is over-rated in my book. Especially for one-off shorts. I find that I am figuring out what a character "looks like" almost right up to the end. As you say, staying on-character is what counts.

Unrelated to that, I loved your stills and they reminded me of a little test I did one weekend of a boy drawing on the sidewalk on a windy day:

I have a lot of fun doing bits totally unattached to larger, more serious projects. Actually animating is my favorite part of the filmmaking process and I wish I could roll in it all day.

Tim, your clip is incredible! Thanks for posting the link.

One of the treats of having so much classic animation on DVD these days is watching a short with commentary by someone like Mark Kausler who can point out each animator's scenes as they play. There was a lot of off-model animation in those cartoons as well. And, they have clearly stood the test of time. Part of their energy comes from the freedom in each drawing.

This discussion reminds me of one of your previous fundamental questions: are we film makers or animators? It seems like here we are saying that the over-arching film, character, and story are the most important elements in animated films that stand the test of time.

I think the "animator" can also be a "filmmaker" if they don't obsess too much about animation technique just for the sake of it. I'm more filmmaker than animator, but despite that I am acutely aware of the joy of animating. It's like nothing else.

The joy of animating for me comes when working on my night moves.

I personally do not especially enjoy animating.
I do it because I love that moment when an audience makes an emotional connection with the character.

I think this is especially interesting when dealing with the characters David and Tim have posted.

There is a real art to taking a simple character like this and pulling a performance out of it that people connect with.

Captain Hook is a pirate with a pirate hat and a costume - he's clearly a bad guy.
The basics are there before the character even moves.
Most "commercial" animated characters are based around these archetypes.

Tim and Dave have to work twice as hard to give these fellows truth and life (or they're just very clever or lucky).

Great point...in your spin on the shallowness of a character like Capn Hook. Why should it be so obvious who is a villain? Are the great live action films this way? It seems to me that animation handicaps itself in its easy readability.

Eric Goldberg advocates a "name that tune" approach to animating a scene. He wants the audience to know the character's feelings in the least drawings possible. I am in sympathy with that idea, but not in how it is applied to things like modern Disney features. There it just seems like one more formula to me.

I'm still unsure of where the enjoyment on animation comes in. So far, I don't enjoy it, until halfway through. Getting started is nerve-wracking.

Today, I attempted to animate something spontaneously. Its was actually my first in a while, and I felt really weird about it, and didn't accomplish anything. I'll be trying again every coming day. In the time I wasn't animating, I was hearing about how some animators did certain pieces, and everything they had to pay attention to. Between keeping the weight, shape, timing and everything else consistent, it seems like a struggle to have fun in all you have to pay attention to.
I find that viewing it and making it are severely different.

I don't have the patients to do the type of animation Richard Williams was engaged in. I think it would be too time consuming and tedious in a way that doing simpler animation helps me avoid.

I suggest you find the fun by throwing out all the so-called rules of how to keep something consistent and work on something that lets you just cut loose. Give yourself permission to fail.

You probably don't have the patience, either...

(It might be good to have some patients to do it for you though).

ain't I a wonderful speller?

Ahhhh, another reason why I miss New York. Here in LA, "not caring about the technicals" is a bit of blasphemy. In order to be hired for 90% of the jobs out here, you need to be a technicalist. Character Designer, Storyboarder, etc. I think there isn't much room here for filmmakers.

But then, that could be just the scale of the work being done, or just my experience so far.

In summary, I think New York and Los Angeles should merge and form their own continent. We'll call it Animasia.

Very thoughtful post.
I Enjoyed this discussion very much.

It's one of the biggest things I've learned over the years. The Question of are you moving a character just to move it. (which is pretty much what your doing in advertising) or are you focusing your efforts on conveying emotion and a story.

But like Jim Suggested, imagine if
we bridged the gap!

Now that would be interesting.

oh and great personality in those
drawings : )

As you know, we have such specialist type jobs in NY too, but they are largely at our bigger studios on TV series or feature work... but, there are also lots of generalists in NY earning a living in freelance by working a variety of skills. And, of course, indie filmmakers get to employ their own personal mixed bag of skills... Another reason why I have happily built my career here. I wouldn't be anywhere else... although I have a soft spot for you guys in LA and the fine work you're all doing.

I've had several conversations with master animator Dan Haskett in which he wished for a mash up between NY substance and LA technical chops. I think both descriptions are too easy a label. But, If we were to agree that NY is substance, I'd suppose I'd take that any day over straight up technique. Technique doesn't tell a story or make me care about a character. That has to be in the writing in the first place, and our best bet for substantial writing in North American animation today comes from the indie world.

"Technically sound" is a VERY broad notion in animation.

I mentioned earlier that it takes a special skill to make characters like David's example here, live and move and breath.

Does this make his work less sound, or less showy?

Good discussion, guys...This is a big subject here. To clarify, I'm not against craft. But, I am against over blown craft that exists just to draw attention to itself. In my eyes, the perfect blend of craft and heart (without being showy) is Dumbo.

So, how can you tell if a film was crafted effectively (or technically sound)? That's easy... if you don't notice the craft then it did its job. If you got pulled along by the characters then there was good craft. That's why writing does so much of the heavy lifting. That's why we can say that South Park is well crafted. I wouldn't say the same about Treasure Planet.