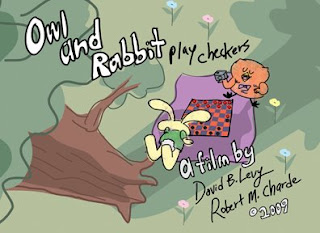 Working in NY animation, one can't help but notice the thriving indie scene. This city has more individuals making indie animated shorts and features than any other place in the world.

A year ago I was doing a Q and A after a screening of my film, Good Morning, at the BAMkids festival in Brooklyn. Sharing the stage with me was a filmmaker named Barbara Parks, who co-owns a sound studio called Splash Studios. A man in the audience asked me why I would make a film like Good Morning if I wasn't being paid for it. "Indie films are made for self expression," I said, before adding that they can also have commercial results. How true that was. Just this past Friday I finished animating/directing a pilot for Barbara Parks. That Q and A at BAM was our introduction, of which I owe to my film Good Morning.

I'm going to assume that most industry folk know how many benefits there are to making personal films. So, why aren't more animation artists doing it? I would suggest that too many people are stuck. To get past being stuck, one only has to be creative with their approach. Here's some suggestions for how to get started, no matter what group you belong to.

1-you're not a writer:
(By "writer" ––for the purpose of this discussion––I want to focus in on traditional dialogue or narration for narrative storytelling)
Okay, you're not a writer. No problem. Why not try a documentary approach? Base a film around an interview or use some found audio and repurpose it. The Rauch brothers are doing amazing documentary style films based around interviews from StoryCorps. Other filmmakers (such as Paul Fierlinger and Signe Baumane) have done great films based on their life experiences, narrating the tracks with the honesty of their own voices. Or, why not make an experimental film by starting with a strong music track that does not require any linear storytelling? Why not animate to a pre-existing song? That's what I did when I animated to Bob Charde's song, Good Morning. Need more examples? Buzzco Associates, Inc. and Debra Solomon have based their entire filmic careers on animating to songs.

2-you're a writer, but you're not an animator.
Barbara Parks fits this category. She works as a sound designer by trade, but she co-wrote a script that she wanted to see animated, so she hired me to collaborate with her to make a film. This city is filled with animators to partner with...and it doesn't always have to involve an exchange of money. Potential collaborators have a way of finding each other, but only if they take a look around or are (at least) open to opportunities that present themselves.

3-you're not a writer nor an animator.
Maybe you're a designer, an illustrator, or a painter. If so, your talents could set the visual style of film. My newest short, Owl and Rabbit Play Checkers, was initiated not by a writer, nor an animator, nor a visual artist. The project was suggested by my composer Bob Charde, who enticed me to collaborate on another film by creating the film's score and voice track and emailing it as an Mp3 to my inbox.

***However, the biggest obstacle one may have to face (whether making a film on their own or through collaboration) is to have enough courage to take the public risk of making a film. Films are for sharing with an audience and there's a chance the film could be lousy. Let me be the first to tell you that I have more than one lousy film to my name. At least two, in fact. Oddly enough, I believe those films both helped and hurt my career to date. I know how they helped because they were partly responsible for landing me some important jobs and promotions. I am also fairly certain that they hurt me. They might have cost me credibility as a filmmaker with some, which could have damaged my chances with selling certain pitches.

The truth is that films don't lie. Instead, they tell stories. They tell the story of where a filmmaker is at––in terms of maturity, level of craft, and authenticity of inspiration. Yes, there are risks to making a film. But, I'd say that if you believe in carving out a long term career in this industry, it is a risk worth taking.
Posted by David B. Levy at 12:01 AM

ALL films, whether story-driven or experimental/song accompaniment or documentary are written. For someone with such respect for the writer - you - I'm surprised to hear you intimate otherwise.

"I am also fairly certain that they hurt me. They might have cost me credibility as a filmmaker with some, which could have damaged my chances with selling certain pitches."

I would like to hear more about this because I don't believe it's the case.

And perhaps it's my whacking great ego, but I've never had a problem showing folks my films.
I guess I figure that if I like them then someone else is surely going to as well.
Ego or naive maybe...

I agree that all films are written.... my focus was on traditional writing. I have noticed that those with affinity in one type of writing (for example song-based films) don't automatically have the facility with dialogue-based or narrative films. I think they are very different muscles to develop. I don't assume to say one is right or better than the other. I'm only narrowing the focus of discussion for the sake of clarity.

I'd call my experience, growing up in public. And, I think that's true for any filmmaker who makes a film and shows it to the world. But, as we are also in a commercial world, personal films can have an impact on ones career (for the good and the bad.) In reality, my films didn't DO anything but show where I was at... and in some cases that made me an ill fit for some opportunities and opened doors to others. I would wager this is as true for anyone.

I never regretted my effort on any film... but, I do regret a couple of films. Maybe that's healthy. I don't wager its a good thing for any type of artist to be satisfied with everything they do.

Dave, do you have anything to say (or a percentage) on filmmakers who have a hard time observing their own work? There's no doubt our films are meant to be seen by an audience, but you also talk of films that show where we are at as filmmakers. Even then, there are those, like myself, who lose objectivity on a film, and are unaware if the film helps or hinders them.

Also, if a filmmaker prefers to collaborate, rather than do everything on his or her own, that doesn't necessarily make them lazy as a personal filmmaker does it? Lately, I have been hanging around with a lot of musicians, and these are people I want to make films with. Is that inspiration, or the ego taking advantage of someone?

Many filmmakers express discomfort of being in the same room when their films are screened. I'm among that group. It can be quite unnerving, especially if its in the context of jury screening (as we have with the ASIFA-East festival). But, I felt it was important I be there. It was educational every time and hugely important to my growth as a filmmaker. Besides, I'd be much more upset if my work wasn't up there, if I didn't have anything to contribute. For me, that would be like not having a seat at the table.

I say: make films and get over it. We are lucky to have such pursuits to spend our time. In other countries people are starving or ducking rocket fire. I don't think sitting in an audience when your film plays is such a big deal in that context.

And, on your other question... there's no wrong way to collaborate on a film. Let the film you are making be your guide for who to work with, and how to get started, and how to split up the workload. Partnerships are mutually beneficial. Be open, pick good partners, and be on with it.

Learn to enjoy watching your films whatever the situation.
You might be the only one who does actually enjoy it and at least one person should be enthusiastic about your work.

I like collaboration because is it allows me to focus on what I AM good at. I'm not crazy about the stories I write, I don't think they are "as good" as my animation, direction or design. Fortunately, I have a brother with a nose for good material. Our first films have been made using "documentary" audio. In the future, I'd be happy to work on fiction or musical stories, but I'll always be more than happy to have that source material come from someone else.

Thanks for the advice, Dave.

My name is Diana, i wold like to send you some information about a shortfilm we are developing in our studio!

Where can i email you?

I'll tell you why I'm stuck...I miss the indie buzz one gets around all those animators in NYC!

Really though, there's something so motivating being around all that energy...I would always catch the bug of creativity and sharing amongst my peers.

Maybe I'll be back someday...miss you guys.