You Screen, I Screen: My Three Days at KidScreen 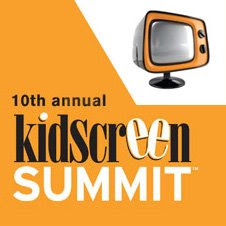 I just finished three days at the 10th KidScreen Summit in NYC. It was my first time attending the conference, which is mostly geared towards the community of children's media executives and production companies. It is truly an international affair, with every corner of the developed (and developing world) seemingly represented. I could be wrong, but the only minority group in attendance seemed to be the artists/writers/creators, who (ironically enough) are the people that actually may provide the content that the rest of the conference attendees base their existence around.

My ticket into the proceedings was the event I hosted with Tom Warburton, which fell on day two of the three day event. We had a decent turn out that looked positively anemic in the giant room they scheduled us in. But, the event went great. Tom was his usual energetic and open self so all I had to do was help organize the conversation by leading him through topics the audience might want to hear most. We covered the formation of Tom's career at such studios as Buzzco, Jumbo, and J.J.Sedelmaier, and how skills and relationships he built up over his first decade in the biz served him well on the pilots and series that were to come his way.

Tom is one of those unique individuals that have scored green-lights/deals on each pitch he has attempted to date. He revealed that he takes a lot of care on his pitch books, trying to make them as fun and full of visuals as possible. In a similar way, he sold his upcoming children's book, 1,000 Times No (published by HarperCollins) after first producing an entire dummy book that left no stone of the project unturned. Yet, Tom cautioned that everyone should pitch in their own way because sometimes making too complete a pitch could backfire (yet another reason why there are no universal truths when it comes to pitching.)

Speaking of pitching, I engaged in two rounds of speed pitching where creators have 3 minutes to pitch the executive of their choice. Sign ups are done in advance, on line, and (due to the high demand) each creator is limited to two speed pitches. Maybe that's a good thing. Three speed pitches could give a creator a heart attack. In truth, I thought it was a pretty enjoyable experience. On the negative side, you don't get to get your footing with the executive before you begin to pitch. Instead you just bust into the pitch. After a quick handshake its go time. I started with a pitch to an exec from the UK who was busy jotting down notes during the whole of my three minute pitch of one project. I didn't think my pitch was making much of an impression, so as it drew to a close I left her with a second project for her to check out on her own. "This is more like it," she said with enthusiasm. It was a funny moment and I think it well demonstrates how much a crap shoot this pitching business is. The trick is to roll with it and let it roll over you. In case anyone thinks that NOTHING ever connects with an executive in this speed pitching scenario, Kay Benbow of UK's CBBC revealed that her network is about to debut a show that was speed pitched to her at KidScreen Summit three years ago.

Outside of the speed pitches, I scheduled 12 or so informal meetings with executives from media companies around the world. These meetings were as short as ten minutes and as long as a half hour. I can't say that I scored a deal at any of these meetings...but, attending Kidscreen allowed for lots of other chance encounters, spontaneous pitches, and also an opportunity to reconnect with networks/clients I've worked with in the past.

One thing worth noting was that the UK seems to be embracing a method of development that has not been used in the states since the days of Termite Terrace. Today, at the UK's CBBC and at Cartoon Network UK, there are in-house development teams made up of artists, writers, directors and producers. These networks still take outside pitches, but some percent of what makes it to air comes from these in-house teams making original content. That's a very special investment that ought to be tried by networks in the states.

At KidScreen I was also able to meet emerging talent, such as writer Randy Astle, as well as discover that the multi-talented and in-demand art director/set builder Christina Aprea was launching her own production company. I was also very happy to be able to catch up with Linda Simensky (who participated in several events), producer Kris Greengrove, writer Livia Beasley, Elyse Lawson (who is heading up Curious Pictures internal development department), Norooz Production's Shabnam Rezaei and Aly Jetha, and DMA studio founder Tony Ciao.

Should more small animation studios and individual animation professionals be represented at KidScreen Summit? I'd answer that question with another question: Who wouldn't benefit by getting a little more industry savvy? But, obiously, KidScreen is not the only path to that end. Certainly this is an area of interest for me and one I keep returning to on this blog. After all, the principles of animation have not changed since the 1930s but the animation industry model of today is ever-changing.

Does this mean we stop caring about the creative side? Never. I give us artists/writers/creators a lot more credit than that. Surely, we can keep two interconnected agendas going at once. All artists got to eat, right?
Posted by David B. Levy at 12:01 AM

Great report about a very useful event.
I'm enthusiastically envious.
It is a shame the price cost prohibitive for the people who could really bring something special to the event.

I'm not sure the event is supposed to be about creativity. Isn't is for execs to see what's available and buy or not buy)? A Business meeting.

As always, the reminder that a successful CREATIVE career relies on BUSINESS savvy is well made and taken.

The deals struck at places such as KidScreen might be what employs you and me a year from now, so its kind of fun to be a fly-on-the-wall at this event.

Glad Kidscreen was a positive and edifying experience for you. I certainly agree that learning more (and more) about the business side of things cannot hurt we creative people inside of animation. (OK, maybe it would hurt a LITTLE, but it could serve us well in our endeavors!) :)

The UK in-house development team model that you refer to sounds like a really wonderful thing, as well! Having teams of creative people developing for several or many "could-be" projects for television is basically a form of what the feature studios have done for many years now on their projects. I'd love to see some of the television big-shots get more involved with that here in the states!

Good point about the similarity between the way movies are developed to the way the UK is developing television.

I think there is great work to be done in TV and I'm hopeful that other methods of development will be tried.

Just by chance I attended parts of the Cartoon Forum last September, the biggest animation-in-broadcasting meeting in Europe. It took place close to Stuttgart, and actually right next to the animation studio I was working at at the time.
I have to say that although it was an event about animation, it felt very strange, or different for me. Like your kidscreen impression, I didn't really see a lot of artists, although there was a big program of public and private pitches. Everything from the food to the convention center itself was very expensive-looking, but then egain, it was all about selling and buying, so I'm not saying it was a "bad" thing. Of course, the entry fee was something about 800ish Euros....

But nevertheless, it was very interesting to have a look at the business side of the industry.

On the internal development teams: At least in regard to Cartoon Network from what I heard, it seems like a pretty funny environment to work in. These teams work on concepts, stories, designs etc. for animated TV series, and get the budget to produce, or even outsource the production of trailers/ pitches. These get greenlit when enough regional divisions of CN signalize that they'd be putting money into that series.

And it seems (please mind, that's only what I heard) that CN let's these teams work pretty freely on crazy stuff, without too much pressure from the outside. At least the stuff I saw was surprisingly and amazingly funny, original and bold. I'm looking forward to what CN will offer in the next 2-3 years.

thanks for the KidScreen recap. It's good to see the creative and business side of things. Also, kudos for the advice on pitching. You can never know too much about the mystical art of pitching.

I found the London animation scene incredibly hard to crack.
Very hard to meet anyone, very hard to make appointments.
Perhaps this internal creative team has it's benefits, but I suspect is also creates unhealthy little cliques...