The Book Gets a Cover 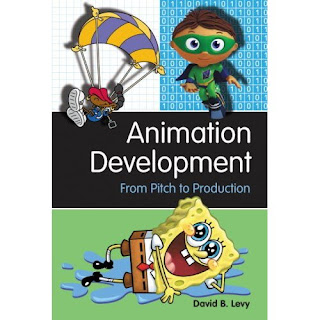 I supposed I'd be a terrible self-promoter (Tom Warburton and Cartoonbrew have already be me to the punch) if I didn't mention that my upcoming book, Animation Development: From Pitch to Production was available for pre-sale on amazon.

Writing a book such as this is such a long-term project. A year-and-a-half to write, and then months of waiting until Allworth Press's edited manuscript dropped back into my hands. The task now at hand is for me to reread the entire book and answer the highlighted questions the editor marked here and there. The good news is that my publisher, editor, and their sales agents are already very happy with the book.

In a couple of weeks, I'll return the final manuscript. The next step will be for me to approve the galleys, which is the first stage in which I get to hold a print-out in my hands and see pictures and text woven together for the first time. The last stage happens on September 8th, when the book finally hits shelves. Whew!

I still remember the feeling I got when I opened the box containing copies of my first book. There's something about a book that is different from a film, (besides the obvious differences, of course). A animated film is like magic; an illusion. Richard O' Connor recently remarked (in a comment on this blog) that animation is essentially a process. He's correct. Animation is series of frame-by-frame images that only come together the moment we flip drawings, ram preview, render, press the dvd play button, or tweak the knob of a projector. That's when this process comes to life, albeit it only for the length of the animation. It doesn't really exist outside of that moment of play.

Even when you hold the dvd in your hands, its not really the same as holding a book: leafing through its pages, smelling the ink, and (over time) making your own signs of wear and use visible to its spine. A book comes alive in the reader's hands. I'm very grateful to have had this experience, and I'm tickled that I'll soon have it again.

There's something different about this book from the last. The first book served as a sort of walking tour through a potential career in animation. A career in animation could not have been a broader subject. There was so much to cover, and over the years I'm finding more and more to include if and when we are fortunate enough to print an updated edition. By its very nature, the first book had to assume that a good portion of its readers might be beginners or students.

This time out, I have a book that has the benefit of a more concise subject. And while the book will certainly appeal to beginners and students, there's an even greater likelihood that Animation Development: From Pitch to Production could appeal to established animation artists, writers, directors, filmmakers, voice artists, producers, development executives... in short--anyone that dares to be closer involved towards the creation or production of an animated series.

A while back I took some slams on the asifaeast.com "exposure sheet" blog after touting of the value of relationships to any career in animation. I'm still scratching my head about that one. My current freelance job, as the supervising animator of a prime time network pilot, sprang directly out of a relationship I fostered with its creator after we met six years ago while serving on a film festival jury. In a few weeks I start a new freelance gig that sprouted out of a relationship I have with the producer (in fact, I helped recommend her for that job by arranging an introduction to the network's senior director of programming).

Fostering and nurturing relationships not only leads to employment opportunities...it can also help you get well known characters on your book cover. It took three or four months of e-mails and legal back-and-fourths, but relationships I had with friends Tom Warburton, Brown Johnson, Linda Simensky, Angela Santomero, and Traci Paige Johnson... allowed my new book to be adorned with some very recognizable characters, and for that I will always be grateful.

Unlike my explanation about the different natures of books and films, relationships have no trouble bridging that great divide.
Posted by David B. Levy at 5:31 AM

"There's something different about this book from the last."

Regarding the relationships business back on the other blog.
That, I think was exacerbated by another issue (unpaid work).
I for one, could not agree with you more, especially in a market that not only relies heavily on freelance work, but for supportive colleagues to help direct work your way (and back again as often as possible).

Congratulations, Dave! I'm eagerly awaiting the arrival of your next book. I agree with you on the importance of fostering relationships. Besides the obvious networking benefit, I think we all have a lot to learn from one another, and that in turn fosters our development as artists. The vibrant, close-knit, and supportive community here in NYC is something I truly treasure about my choice to remain a NY Animator.

I can't wait to read Dave's new book in September. The advice Dave gave me on my own pitch was invaluable and really pointed me into the direction of looking at it from the network's perspective.
I always wished I could carry around my own Dave Levy in my pocket so that I can ask him how my pitch is coming along. This is the next best thing!

There's no context where I find it understandable to slam the importance of relationships in any career. That's just out of my range of comprehension.

Dayna,
Thanks!! And I totally agree about the special-ness of the NY animation community. I treasure it too!

Chris,
I'm really glad the advice was helpful. PItching is so hard and so little of it is intuitive. I'm glad you are continuing on with your pitch. Knock 'em dead.

Fostering good relationships is essential in this industry if you want to survive. With so many of the larger studios closing around the city it has been the people I worked along side of, in the trenches, over this past year that have helped me to find work. Most of the work I have done isn't advertised on job boards, they come to me through colleagues. Whenever I start a job I often say to my employer that if they need anyone else, I know good people looking for work. This often leads to work for people whom I recommend as well. I can only hope that others do the same when they start a job, which will lead to work for me in the future. When you recommend someone for a job you put your reputation on the line as well, so it can be tricky. But thanks to the great network of people here in NY, it isn't that hard to find good people. By fostering good relationships you were able to get some great art for the cover of your new book, Congrats.. and I look forward to reading it.

Justin, you bring up some interesting issues about relationships in regards to recommendations. Its very important that people don't use friendship as the only basis for recommendations.

People have to consider the total package of a person before they recommend them. Are they the right artistic fit? Do they know the software? Are they able to get along with others and take direction? Are they responsible with deadlines and communication? Availability is but one criteria.

You are very correct to point out that we put our own reputations on the line when we recommend someone.

"There's no context where I find it understandable to slam the importance of relationships in any career. That's just out of my range of comprehension."

There are two very bad professional relationships I have experienced. The fallout from these fostered a lot of negativity (in my mind) towards people who don't deserve it -and two or three who absolutely do.

While there are any number of reasons for souring relationships only one is the real reason: money.

And not paying people properly is indicative of a general disrespect.

Disrespectful relationships should be avoided.

congrats for the book!
out of curiosity; why didn't you design your own book's cover instead of using copyrighted materials?
isn't it easier just to draw it? less painful?
and let your audience see your own artwork!

Congrats, Dave! I look forward to reading this.

"Somebody", I'm guessing Dave wants to sell as many books as possible, not show his work off. This cover says, "Pitch and find success like these big name shows you've heard of". Probably a better selling point.

A good question.. The truth is the the book/publishing market is a very small market and the publisher does everything they can to ensure that a book gets noticed and bought.

In fact, booksellers like amazon and Barnes and Noble actually comment on book covers and I know first hand that Barnes and Noble will not stock a book that does not have an enticing cover. In our industry, this means its essential to have recognizable characters on a cover.

There are plenty of industry trade books out there that don't sell and they all have terrible generic covers. A book with contemporary recognizable characters is hugely important in a book like this. It gives it credibility. And, it will help sales.

Certainly not getting paid by a client would be a reason to walk away from a relationship. And, I agree that disrespectful relationships should be avoided.

But, I'm sure we all agree that relationships are essential to making it in this business. Will there be negative experiences? Of course... but, they shouldn't make us not trust again.

Dave,
Your advice really helped me when I was pitching, back in those Pinky days. I had so many ideas floating around, your thoughts on pitch structure aided me to break it down into a clear presentation.
I'm looking forward to seeing how much of your thought process you've put in this book.
Congrats!